Siachen: Taking theatre to the peaks of greatness 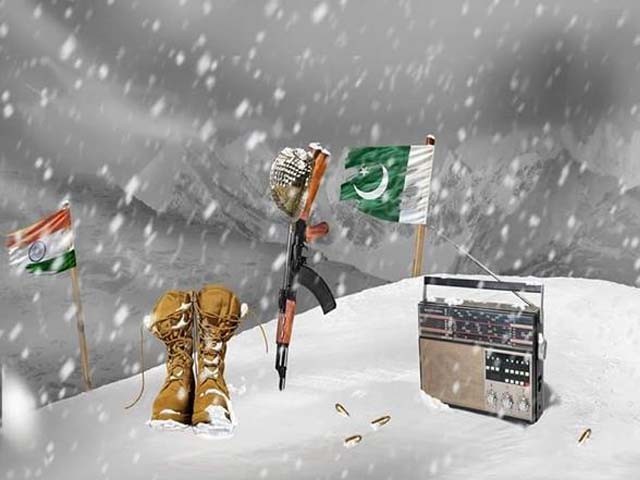 It is the story of a group of soldiers stationed above the clouds, showcasing their struggle in sub-zero conditions, far away from their loved ones. PHOTO: SIACHEN FACEBOOK PAGE

I read somewhere if you continuously compete with others you become bitter, but if you compete with yourself you become better. Anwar Maqsood definitely believes in this because he has outshone his previous plays Pawnay 14 August, Sawa 14 August and Dharna with his latest Siachen.

Siachen has outdone every brilliant quip and taken this theatre performance to the peaks of greatness!

The director Dawar Mehmood doesn’t reveal anything beyond the vague prelude ‘about 20,000 feet away from God Himself’ on the play’s Facebook page. It is the story of a group of soldiers stationed above the clouds, showcasing their struggle in sub-zero conditions, far away from their loved ones. The play grew in momentum on social media, which motivated me to watch it. I reached the venue dressed warmly as advised by the play’s Facebook page.

The play engrosses the audience immediately with soldiers pumping adrenaline with their patriotic satire; our aide-memoir to Anwar Maqsood’s unique genre. The enemy (an unknown voice) is heard by all in the auditorium with taunts  like ‘India is better at cricket’, prompting witty quips from the soldiers and fits of laughter from the audience. The play delights with its brilliant use of auditorium space – as dreams seen by soldiers and letters being read by their family members are positioned all across the hall in different spotlights. This varied use of space maximises the engagement of the viewer, not allowing the attention to wander away from the jocularity of the dialogues.

I was particularly intrigued by the way the soldiers cracked jokes at each other’s expense. The Captain although was spared the brunt of their banter because of his rank. On one occasion though this reverence is overlooked with a jibe:

(Sir, if you hadn’t been a Captain no one would have laughed)

One scene put me in stitches: the surprise entry of an Indian Bihari soldier, as he unsuccessfully tried to convince the group that he is from Pakistan. Anwar Maqsood maintains his signature by paying tribute to the epitome of all loves: the mother’s love. This is very emotionally celebrated when Karim Khan remembers his mother one last time as he receives shahadat (martyrdom) at the hands of the enemy.

Do take tissues, everyone, you will need them.

The play ends with an acappella-style rendition of the national anthem, which is hauntingly beautiful and fills the heart completely with its simplicity. The director does need to take into account the eye levels of the audience seated at varying heights of the auditorium. The scenes in which one or two actors climbed up the peak to deliver dialogues at the raised height were hard to see by the audience members seated in the back rows.

Siachen is a spectacularly tangled mass of emotions overlapping one another. It’s a dance of emotions which preys on our sensitivities and sensibilities with the strongest of impact, keeping us in stitches and tears concomitantly.

The play’s duration is 90 minutes and its ticket will set you back Rs.1500. It is scheduled to run till the end of January at the Arts Council in Karachi.

I would suggest you guys go see it as soon as you can!

The author is a young advertising professional with keen interest in theatre, stand-up comedy and making puns. She tweets as @KhopreKiMithai (twitter.com/KhopreKiMithai)