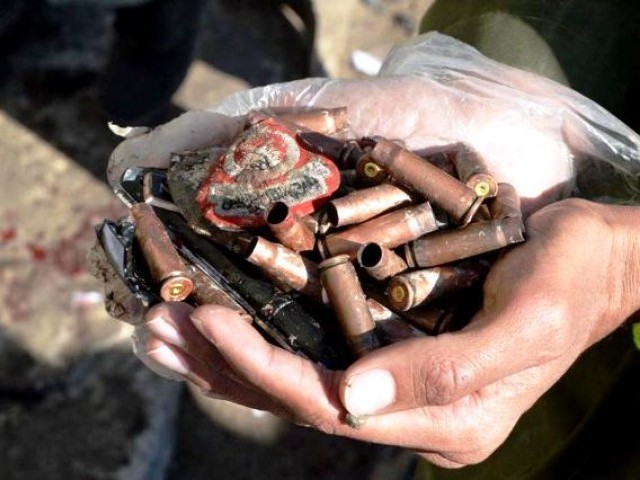 Pakistani security officials collect belongings of their comrades from the scene of a bomb blast that targeted a Polio vaccination center in Quetta, Pakistan, January 13, 2016. PHOTO: JAMAL TARAQAI/EPA

A loud blast followed by an explosion in Quetta on Wednesday left several persons dead and others severely injured. The scene was a polio vaccination centre, and the explosion took place near a group of vehicles which were being loaded with vaccination supplies.

Twelve of the dead belonged to the police, two to the paramilitary, while two were civilians. Fifteen people died at the hands of a suicide bomber whose remains were later collected from the site. The police and paramilitary personnel killed had come to the polio vaccination centre to escort the polio workers since polio teams are so commonly subjected to attacks these days.

What makes people who organise such terrorist attacks tick?

In any war, getting into the mind of the enemy is of crucial importance. Such terrorists must possess a well-developed streak of sadism. It is difficult to believe that without this characteristic, a person could indulge in such bloody carnage, unless of course they’re paid to do such things. Revolting as it is to imagine that this could be so, it is astounding what money can achieve because it has no ideals, it recognises no nationhood, no morality, no religion.

If you’re dead yourself, you cannot witness the suffering of the people you’ve killed, therefore suicide bombers themselves are unlikely to be sadists. For the organisers, it could be the offer of large sums of money, but in the case of the suicide bomber it would have to take the shape of aid for the family left behind. It is one way for a person to obtain money for a desperate family in a country where the authorities couldn’t care less.

It reminds me of the young Indian squash player who was willing to sell his kidney in order to continue playing and by extension make more money for his family. That young man is the sole bread earner in his family. His earnings paid for his sister’s wedding and his family depends on him. He too should have been able to rely on support from the government instead of selling his body to make ends meet.

The motive could also be a threat, the kidnapping of a child or the death of a parent. Strap a bomb onto the person being victimised and detonate it when agreed or else your family suffers. These are entirely possible, even probable motives in a country where law and order barely exist. It is how the bhatta mafia works and thrives.

The only other motive is a genuine belief in the justification of the violence committed and an expectation of divine reward, paradise, riches or whatever is most desired. Hard as it is to accept this mangling of religion, it is an extremely possible motive for those who believe in the divisive fire and brimstone speeches delivered by so called religious preachers and leaders.

Who can deny the existence of the bitter gulf in society, the huge chasm exposed by this event in Quetta and others like it?

On one hand there are people who will pay money to go to great lengths in order to get their children inoculated against polio and other diseases. On the other hand, there are people, such as the man who held the polio team hostage in Killi Ahmzai, near Quetta in 2014.

Ranged alongside him are people such as these who bombed the centre in Quetta on Wednesday. The militant organisation Jundullah claimed ‘credit’ for the attack which killed many innocent people.

Would a man who has a small house, with well-fed, school-going children and the security of government support be willing to blow himself up? No.

Such a man could only commit a heinous act if he was taught to categorise humanity as kafirs (non-believers) on one side and momins (believers) on the other. In the recent attacks in Paris and the United States we have such examples and we also know where they got their ideas from. Yes, our mullahs (religious clerics) have much to answer for.

You wonder why with all this pressure on the polio vaccination drive, the World Health Organisation’s demands for travellers to be vaccinated have been accepted without amendment. As it stands, when a person travels he/she must get vaccinated against polio and this particular vaccination, instead of lasting a lifetime as with children’s vaccines, lasts for just one year. This has only added to the burden on these centres since frequent travellers will keep returning for drops to obtain a fresh certificate each year.

This is an example of a critical shortcoming in planning and organisation which can be found in every sphere in Pakistan, be it law and order, in the medical field or in education, all of which are implicated in attacks such as the one in Quetta.

If one were to point to any one crucial thing, any one reason behind the mess that is Pakistan, it would be a lack of planning. It is this factor which is responsible for the huge gulf in society and for the entirely irreligious religious teaching that pervades and destroys our lives today.