Will Turkey and Syria be another Pakistan-Afghanistan? 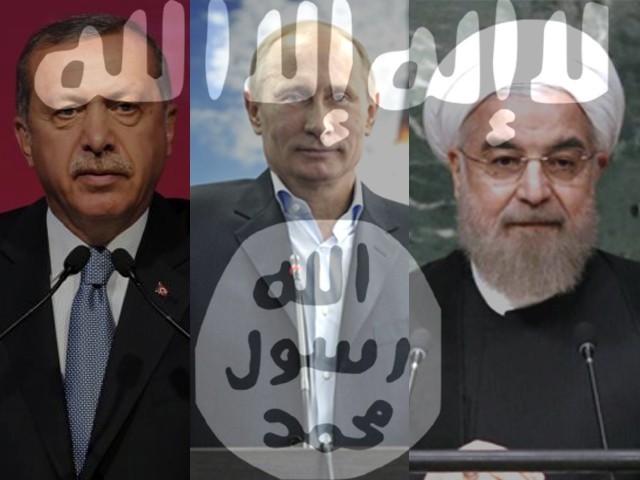 Russia’s long-time partner Iran also had crucial strategic interests in the survival of the Assad regime.

When we were younger and played with matchsticks, our parents used to say ‘don’t play with fire, or your hands will get burned’. The January 12, 2016, suicide bombing in Istanbul’s Sultanahmet district has certainly highlighted this predicament. The attack took the lives of 10 people, all of them German citizens and was swiftly, or rather conveniently, blamed on the Islamic State.

As if Tuesday’s incident wasn’t enough, a car bomb went off outside a police headquarters in the predominantly Kurdish Cinar district, Diyarbakir province, killing six people and wounding at least 39. This attack has been blamed on the Kurdistan Worker’s Party (PKK) militants, who are active in the province. Turkey has suffered numerous similar bombings over the past few years, more increasingly so after its involvement in the Syrian quagmire that the West and its allies find themselves in.

In the post Moamer Qaddafi period, the west especially the US became increasingly confident that it’s covert indigenous uprising model – the usage of local proxies to create a revolutionary environment and overthrow the government – was a resounding success and thus could be implemented in other countries as well. Therefore, as soon as Qaddafi was unceremoniously overthrown, plans for another indigenous intervention were underway in Syria. Bashar al-Assad was facing a moderate sized opposition when people rose against him in 2011’s Arab Spring. This was a controllable problem for him, which was being dealt with an iron fist in sync with other dictatorial rulers in the region such as Saddam Hussein, Qaddafi and Hosni Mubarak.

Real problems for the regime arose when a concerted western effort actively funded, trained and armed both ultra-religious and secular militias to fight in Syria. The influx of foreign fighters was an immediate need to aid and abet the home-grown ‘jihadis’, and thus a base of operations or an outstation was required to provide all this logistical support. Since Turkey, a long time NATO member shared a large winding border with Syria, and the Erdogan regime was more than willing to appease its western allies, its borderlands became the cultivating ground for the opposition forces fighting in Syria. According to journalists, the Free Syrian Army (FSA) was formed and trained on Turkish soil.

Becoming a conduit for the world’s most vicious fighters imported from all over the world, Turkey went all-in to secure what it deemed to be its strategic interest in a post-Assad scenario.

With military and logistical assistance from Turkey and religious endorsement from the Salafi/Wahhabi clergy based in Saudi Arabia, the ‘jihadis’ tore through Syrian towns and made vast gains. The western media pundits somehow managed to sell this ‘greater evil’, once championed by the world’s No 1 ‘terrorist’, Osama bin Laden and his Al-Qaeda, to their public; painting Assad to be the greatest evil plaguing the Middle East and a direct threat to Israel. Of course, it is an easily forgettable historical fact that Osama was once ‘Tim Osman’– CIA’s go-to-guy in the war against Communist Russia in Afghanistan.

The one thing that the US and NATO were not counting on was the influence and strategic interest that a rejuvenated Russia – under the leadership of Vladimir Putin, had in Syria.

Russia’s long-time partner Iran also had crucial strategic interests in the survival of the Assad regime, since all its logistical support for Hezbollah passes through Syria. The removal of Assad would beckon harder times for Hezbollah, whose continuous conflict with Israel is the corner stone of Iran’s foreign policy.

Russia on its part was not about to lose its only military base at NATO’s doorstep. Soon Hezbollah and Iranian Revolutionary Guards (IRGC) added able-bodied and battle hardened warriors in the mix, fighting alongside the Syrian Army and their volunteers.

With the tide turning against the Syrian opposition, the ultra-extremists were unleashed onto Syria and Iraq namely ISIS (also called ISIL/Daesh). This ultra-extreme terrorist group was formed from the remnants of the dying FSA and its partners. The group’s brutality and hostility to all things foreign made it a household name, but not until it had executed western nationals on camera; evoking a condemnatory response from the US and NATO.

After Putin’s diplomatic manoeuvring killed any chance of openly bombing Syria in the UN, Turkey was left standing alone, fighting a losing fight.

As soon as Russia started using cruise missiles and carpet bombing against rebel positions in Syria at Assad’s request, Syrian opposition including, Daesh, suffered mass casualties. The turning tide of the war has forced the once willing quasi-religious mercenary (read jihadi), to rethink fighting the war in Syria. With nowhere else to go these ‘defected’ terrorists are now finding other fights.

Turkey – In need of fireproof pants

Turkey’s voluntary participation in the Syrian conflict at the behest of the US and NATO, has led it to become a safe haven for terrorists and terrorist activity.

The training camps that Turkey created and provided for in the fight against Assad, are now churning out terrorists who are going north instead of south across the border. Its open financial support for Daesh – by engaging in an illicit oil trade with the terrorist group – has now become a point of contention against it.

This has been exacerbated by its recent conflict with Russia after Turkey shot down a Russian fighter jet late last year. In whose airspace this plane was shot down, is of course a matter of great contention.

Nevertheless the resulting altercation between Turkey and Russia has created an ugly situation for Ankara. NATO’s spearhead is now bleeding itself.

Historically speaking, Turkey has committed the worst blunder it could after achieving a secular society under Kemalist policies (this statement is of course bound by the premise that a secular society is a panacea for all social ills, which it definitely is not).

Turkey has done a ‘full Pakistan’

By that I mean it has committed to an era of violence, mass murder and high military spending by joining in on a war in its neighbouring country, which if avoided would have been far less disastrous in the long run.

Ankara produced rebel forces which went across the border and fought in Syria, only to become more lawless and return to create havoc in Turkish denominations, such as Daesh did in Kurdish dominated areas.

Taking a page from our history, terrorist attacks spiked in Turkey once its involvement began in Syria starting in 2011. According to the American National Counterterrorism Centre (NCTC) Report on Terrorism (2011), Turkey experienced a spike in terrorist attacks, rising from 40 in 2010 to 91 in 2011.

These terrorist attacks have become deadlier and more frequent, and with the influx of rebel fighters from Syria it is bound to get worse.

The Ankara bombings of October 10, 2015, which killed over a 100 people were the worst terrorist attacks suffered by Turkey in its modern history. However, some international media outlets stated that such attacks were only a matter of time and similar ones are bound to happen in the future.

With rising pressure from the Kurds and the blowback from the Syrian front – both from the terrorists and the Russians – Ankara needs to ditch its current western leaning position and get tough with the terrorists.

Perhaps a ‘Zarb-e-Azb’ style all-encompassing military operation is on the cards.

If Ankara does not abandon its current policies, it should get ready to read deeply into the post 9/11 Pakistan-Afghan history, and buy a set of really good fireproof pants.