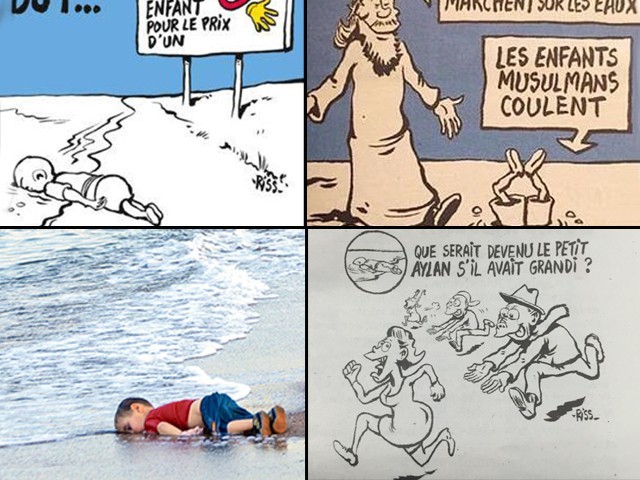 This is not the first time Charlie Hebdo has used Aylan Kurdi on its front page for shock value.

Outrage is a natural response to a magazine cover that seemingly mocks a deceased 3-year-old Syrian boy. Yet, there may be more to these cartoons than what meets the eye.

Charlie Hebdo has produced another cartoon every bit as tasteless as that which we’ve learned to expect from this French magazine. It features the drowned Syrian boy, Aylan Kurdi, and suggests that if the refugee child had survived and grown up, he would have been sexually harassing women in Germany like the other immigrants.

The cartoon refers to the wave of attacks carried out by immigrants in the German city of Cologne on New Year’s Eve, particularly sexual assaults on women.

This is not the first time Charlie Hebdo has used Aylan Kurdi on its front page for shock value. In September last year, the magazine attracted ferocious criticism for allegedly mocking the boy’s failed attempt at fleeing Syria. A similar cartoon made a reference to one of the miracles of Jesus Christ in the Christian faith, captioned,

Charlie Hebdo cartoons are never easy on the eyes. On some occasions, they may appear so tremendously crass, they force one to question the humanity of the cartoonist.

However, there is another side of these cartoons to be explored and its visibility requires a reminder that Charlie Hebdo is a ‘satirical’ magazine. Satire is always coarse to the extent that it appears staggeringly stupid and offensive, but intends to denote the exact opposite of what it says.

Charlie Hebdo is a staunchly far-left magazine. It is known primarily for satirising the French right-wing, particularly the Christian right. A person unaware of the artists’ political leanings and its modus operandi, might find its cartoons indistinguishable from the everyday rants of a racist troll on the internet.

How you react to Charlie Hebdo’s recent cartoons depends on whether you recognise the sarcasm that is almost always aimed at the French right-wing, or believe that there’s really nothing beneath the surface of the cartoon.

Taken at face value, the most recent cartoon asserts that Aylan Kurdi may have grown up to become a howling misogynist who ‘gropes’ women. Those familiar with the magazine’s brand of crude satire, perceive it as a swipe at the European racist and his assumption that immigrants and refugees are homogeneously uncivilised.

The latter interpretation shines light at the Western bigots’ insincere condemnation of Aylan Kurdi’s death, and their feigned concern for the well-being of such children. For if Aylan Kurdi had survived, these people would’ve subjected him to the same racist stereotypes as they do to every other immigrant.

Many artists and analysts have offered similar explanations for Charlie Hebdo’s previous cartoons depicting Aylan Kurdi. The cartoon about drowned Muslim children was presumably not intended to mock the refugees, but the self-righteousness and arrogance of the Christian right.

Regardless, it may not be unreasonable for people around the world to feel upset about Charlie Hebdo’s cartoons. Even if one interprets the cartoons as satire aimed at the racists rather than the victims of racism, one may still understandably be hurt by the use of such provocative imagery to make that point.

In a world where Donald Trump runs for the presidency of the United States, sifting out genuine racists from sarcastic liberals has become a tremendous ordeal.

It is an ordeal that Charlie Hebdo should do well to recognise.