Should Imran Khan be arrested for treating a Taliban leader? 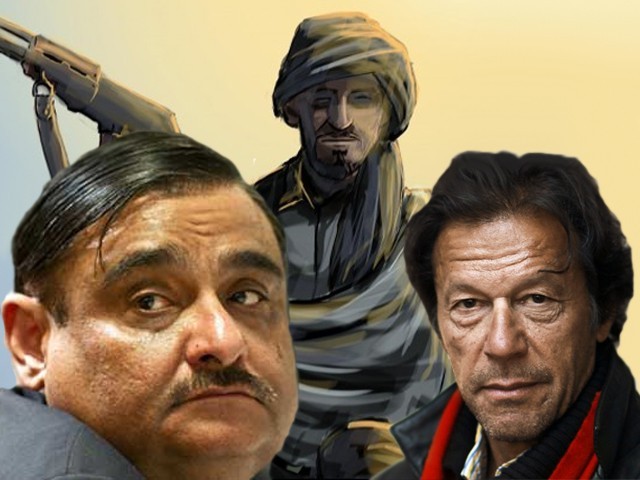 The same logic which makes Imran Khan not a helper of terrorists also applies to Asim Hussain.

I will begin by admitting that I support PPP, the party Pakistan’s urban middleclass loves to hate. The basis for my support is just one – in Pakistan’s context, PPP remains the only mainstream party with a liberal and progressive ethos. No matter how you put it, this is a party which, in contemporary times, has tried to act as a bulwark against rising extremism and has paid the price in blood for doing so.

In 2007, it lost Benazir Bhutto and then Salman Taseer and Shahbaz Bhatti in 2011. It also played a major role in the modification of the infamous Hudood Ordinance in 2006. Its present leader, young Bilawal Bhutto, has also constantly taken a stance against extremist outfits including Sipah-e-Sahaba (SSP) and Tehreek-e-Taliban Pakistan (TTP). On the other hand, we have had leaders like Imran Khan who abstained from criticising the Taliban before the Peshawar attack.

While PPP does have admirable liberal credentials, there is no denying that it has severe issues too. I am not an emotional jiyala and reality is PPP’s name has become synonymous with incompetency and corruption; it is also for this reason that the party suffered heavy losses in the 2013 elections and was virtually wiped out from Punjab. With the way things seem to be moving, losing in Sindh does not seem an unlikely outcome anymore.

At the present moment, PPP is facing the brunt of a ‘clean up’ operation in Sindh. One of its key leaders, the former federal minister, and a close confidante of Asif Ali Zardari, Asim Hussain, is under investigation for various charges ranging from misuse of authority and corruption to alleged abetting and harbouring of militants at his family-owned hospitals in Karachi. The allegation that Hussain was aiding terrorists and militants by allowing them to be treated at his hospital is being considered serious enough by the federal government to try him in an Anti-Terrorist Court (ATC).

But, as a doctor, should the act of treating militants or religious extremists be considered terrorism?

I am in no way trying to defend Dr Asim, but if treating a militant or religious extremist is a crime, then will Imran Khan also be tried at the ATC for treating an Afghan Taliban leader at Shaukat Khanum Hospital in Lahore?

It is obvious that the PPP, to avoid any prejudice, would want the same measures to be taken against Imran Khan, as were taken in the case of Dr Asim; they will want Khan to also be arrested for the same crime Dr Asim is being accused for.

The admission, of course, was made by Imran Khan himself, yet many from the urban middleclass are laughing at PPP’s claim and have tried to imply that the two cases cannot be equated. In their eyes, Dr Asim is a terrorist and Khan is completely innocent.

While I agree that treating a patient, albeit a Taliban leader, at Shaukat Khanum does not make Imran a terrorist, it is important that the same criteria should be applied in a case that is so starkly similar to Dr Asims. In all probability, Imran was not even aware that a Taliban leader was being treated at Shaukat Khanum – but even if he had known, it should still not be considered an act of terrorism purely because hospitals are meant to treat the injured and ill, irrespective of their religious or political affiliations.

PPP is obviously making a mistake in demanding Imran’s arrest, but at the same time I would like to point out that it seems that this demand is being made only in light of this inconsistency and prejudice being applied to both the cases. The same logic that exonerates Imran should also apply to Hussain. Unfortunately, the way Hussain is being tried smacks of political vendetta and selective justice.

It is important for us to strive for fairness, in all ambits of life. I am all for this drive against corruption. Hussain should be tried for corruption and punished if convicted. But trying him at the ATC just because militants have been treated at his family-run hospital is stretching it too much.

And if that is enough to indict Dr Asim, then what about the many times Imran Khan has openly displayed, and maintained, a Taliban apologist stance? If I am not wrong, it was also Imran Khan who did not consent to, in fact vehemently opposed, military action due to which political consensus could not be reached, right? Are these not reasons enough to believe that Khan could in fact have had knowledge of the Taliban leader being treated at Shaukat Khanum and perhaps even ordered the treatment?

Right now, it is important the both the cases in question be tried and dealt with on equal grounds. It is important for us to keep a broader perspective in mind and if we continue to do what we are doing, we will set a dangerously prejudiced precedent. And that is never a good thing.