How I deal with Islamophobia in the US 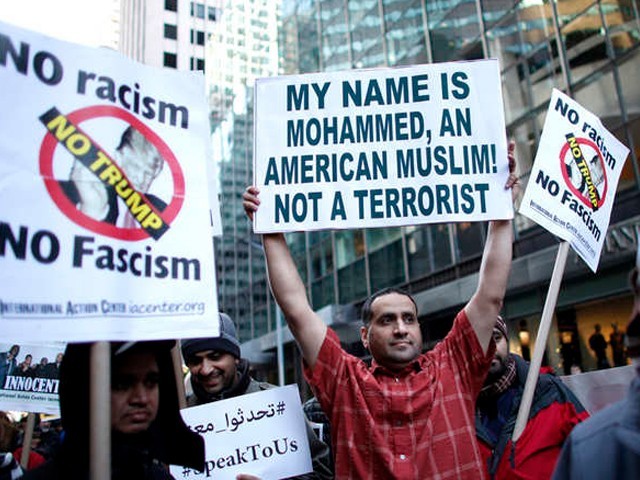 A group of Muslims take part in a rally in front of Trump Tower December 20, 2015 in New York. PHOTO: AFP

Mass shootings in the United States have become a frequent occurrence. Every time I find a breaking news story flashing on my cell phone that mentions a mass shooting, my heart skips a few beats. My first concern is not the number of casualties or the setting of the tragic event, but the name and religion of the shooter.

Unfortunately, in this part of the world, those factors define how the news media provides coverage of the event. It was a nightmare come true when I found out that in the recent shootings in California that claimed 14 lives, the shooters were a Pakistani Muslim couple. Although the motives of the killers are not known yet, this Muslim involvement immediately made we worry about the repercussions on my life and that of others around me.

As a psychiatrist, I became interested in the relationship between mass murders and mental health in the United States. While at Drexel University, I did extensive study on the topic and gave a presentation to the Psychiatry Department about my research. Usually people with mental health issues are victims of violence themselves. Some conditions, such as paranoid schizophrenia, can make people violent at times.  Most of the time, the perpetrators of mass murders in the US have been young, white males with access to assault rifles. In some instances, people belonging to minority religious groups, cultural or ethnic divisions were the victims of violence because of the bigotry and intolerance of the killer. However, unfortunately, many incidents have involved Muslims and that fact is often highlighted by the news media.

In 2012, the American Civil Liberty Union found that the New York Police Department (NYPD) had a program that involved security profiling of Muslims, simply because of their faith. The NYPD singled out Muslim religious and community leaders, mosques, student associations, businesses, and individuals for pervasive surveillance.

In the spring of 2013, I was preparing to run my first ever 10-mile race in Philadelphia. A couple of weeks before the run, the tragic bombing happened at the prestigious Boston marathon. In the first images, the bombers looked Caucasians and I felt a sense of relief that no Muslim was involved. I was wrong; the culprits behind the bombing were fundamentalist American Muslims. This incident led to heightened security at my run. I ran with an anti-drone attacks message on my shirt, along with a Boston Strong sticker and joined many of the other runners in wearing red socks — the Boston baseball team is named the Red Sox— to show solidarity with Boston. It was an attempt on my part to give a message to my fellow 35,000 runners that even though I condemn American drone attacks, I stand by you when terrorism hits this country.

I have never personally experienced any prejudice or racism, except at airports. I am frequently pulled out of line for minor interrogation, body and luggage examination including body search and some chemicals testing of luggage with the help of sniffer dogs at times. There is no denying that my friends and I frequently feel uncomfortable. One friend told me that she was changing her job because of the on-going ‘Muslim bashing’ around her at work.

“I am so tired of hearing about Muslims as terrorist that I am resigning from this job,’’ she said.

The challenge for us is what we can do to counter this general Islamophobia in the US. Social media campaigns such as #NotInMyName are effective tools for young educated Muslims to condemn Islamophobia-inducing terrorist attacks across the globe. However, most of the Muslims in America are well integrated in society and are found contributing at many different levels. It is in the context of their daily lives and through their personal stories and not statistics that they and I can help Americans to not fear Islam.

At a recent event on Islamophobia, lawyer and activist Rabia Chaudry said,

‘’We need more writers who can spread the message of peace and tolerance to others.”

Community engagement and integration into in the social fibre of American society is more important than narrating the facts only. Deeds before words, was her message.  She quoted a study that stated that introducing yourself as an American Muslim rather than a Muslim American has a huge impact on the perception of you by other Americans.

For myself, I have recently started studying the history of Islam to increase my own understanding and to be better informed in discussions with others. But for me, demonstrating my commitment to peace and religious toleration by taking good care of my patients, establishing healthy relationships with my co-workers and involvement in art and cultural activities in my town are the simple but important ways I can best help counter Islamophobia.