The loving humanitarian efforts of an American in Pakistan 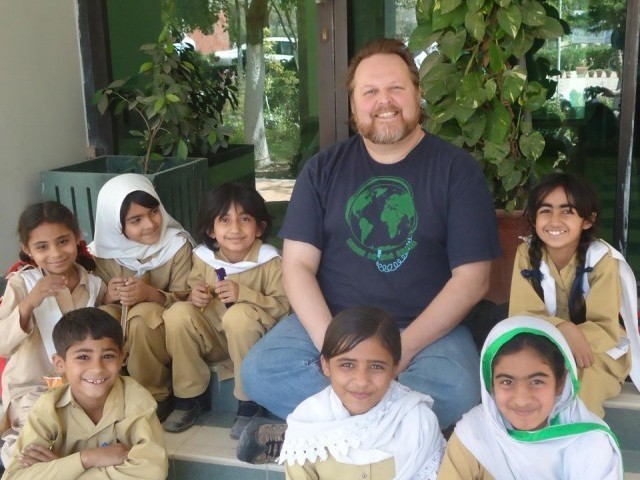 We shouldn't see our success against what is needed, we have to look at each individual we can help: Shea. PHOTO: TODD SHEA FACEBOOK PAGE

Due to frequent media images of violent anti-American protests as well as repeated travel-safety warnings from the State Department, most Americans avoid visiting Pakistan. However, Todd Shea, the founder of Comprehensive Disaster Response Services (CDRS), has adopted Pakistan as his home and is running several welfare projects there.

I learnt about Todd Shea on Facebook several months ago when I was browsing through a list of ‘People you may know’. Pleasantly surprised to learn about the humanitarian work he was doing in Pakistan, I began to closely follow CDRS activities on social media. The 2005 earthquake and the great need to help its victims brought Shea to Pakistan but he ended up finding various other ways to help. I deeply admire his courage to work in areas which we associate with the Taliban and terrorism. He stayed in Bannu for over a year, as well as in the Swat valley and other far-flung mountain areas in order to help internally displaced people.

I finally met him in Washington DC at a CDRS fund-raising event for recent earthquake victims which struck Khyber-Pakhtunkhwa (K-P). My friend, Sarish Khan, Miss Pakistan-USA 2015 and a humanitarian social activist for CDRS had invited me. I was determined to attend the event even though it meant I had to drive 600 kilometres of clogged roads on the busiest travel weekend of the year. Air and train tickets were sold out several weeks ago because of Thanksgiving holidays. Having said that, the evening was worth all the hassle I had to face to get there.

Todd Shea was friendly, lively, humble, and full of energy and compassion. With his hipster beard and wide grin, he was wearing a Superman T-shirt. This suited his personality perfectly since I felt he was a strong character helping those in need. He mentioned that his concern for humanity brought him to Pakistan and in return he has received love, respect, care and admiration.

While rubbing his Buddha-like belly, he jokingly mentioned that food was also in the list of things he has abundantly received. His son, Justin Shea, was present at the event as well. I learnt that he had joined his father’s mission to help needy individuals as well. He led a campaign in Tharparkar, Sindh to aid victims of famine and malnutrition.

With the help of photos and short videos, Todd Shea talked about different CDRS projects. The list included mother-child health, education and empowerment projects in Swat as well as major projects to help internally displaced people in K-P, to name only two.

Todd Shea spoke very highly of Abdul Sattar Edhi for his contribution towards humanitarian efforts. He regards Edhi as his role model and feels he should be honoured with a Nobel Peace Prize, just as Malala Yousafzai was.

This fund raising gala on CDRS’s 10th anniversary was a successful event. All seats were sold out and the Washington-area Pakistani American community contributed generously to the cause.

“I have an old beat-up, mid 90s car and a guitar as my only possessions and I wore my best outfit for the occasion today. So be sure that your money will be spent at the right place,’’ he added before he sang “Dil dil Pakistan” for the audience.

Todd Shea grew up as a musician in the Maryland suburbs of Washington DC. Like many other Americans, he dreamed of having a career in the music industry. However, fate ended up unveiling a different path for him. On a September day, when he was visiting New York City for a music gig, he witnessed a disaster from his hotel window which the world would remember as 9/11. He joined the forces of first responders to help victims of the worst terrorist attack America had ever witnessed. This moment changed his life forever. Since then, he has moved on to help victims of many disasters across the globe, starting from New Orleans, Haiti, Sri Lanka, to the Philippines.

Shea mentioned that with financial, logistical and professional help, he could run many other projects in Pakistan. For him, CDRS is a campaign, not just a project. He is working full-time to expand its services. Furthermore, Shea is working for peace, stability, education, and economic and social growth in Pakistan with a team of volunteers and around 50 staff members who are working tirelessly to improve Pakistan as well as bridging the friendship gap between the two countries. Shea is also an ambassador for Pakistan-USA friendship, doing tremendously important work to improve not only our society but also our image abroad.

We should share the responsibility and join the efforts of people like Todd Shea and Edhi. No donation is too big or too small, every contribution at any level counts. Thanksgiving weekend was the perfect occasion to be thankful for the efforts of these selfless people trying to improve the quality of life for many others.