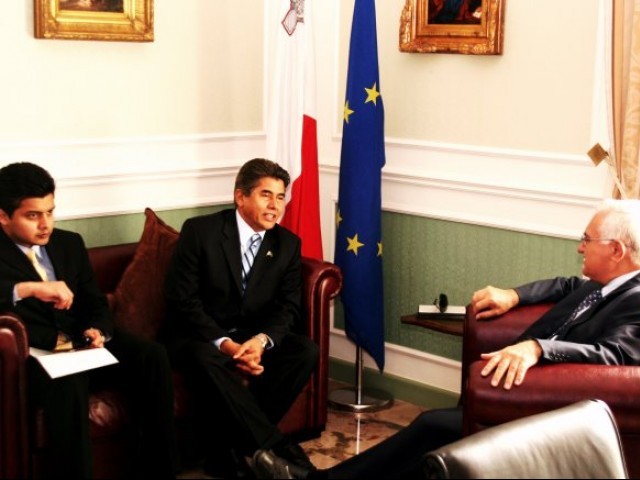 Some of you may have witnessed a flurry of photographs on Facebook some time back boasting the Matrix-like poses of a young fellow of no more than 25, receiving in his words ‘the gun salute and government protocol in Malta.’

Under what authority may I ask?

Another bombastic snap provides the answer to the mystery, our hero in tow with the Pakistani High Commissioner to Malta at the Maltese Presidential Palace with the caption reading “aka Dad”!

Apparently, the highest positions of our Foreign Office are now decreed under inheritance laws. Father and son on a mission to build the country’s credibility as a democracy – I am sure the President of Malta was honoured to receive our dapper ‘hero in diapers’. In all likelihood, he is not even an employee of the Pakistan government and even if he is, there are serious doubts around his qualifications. As I write, I find my fingers dancing on the keyboard to the rhythm of cynicism drawing my attention to the highest office in our dear nation; a first in history of a father inheriting from his son the right to dictate a democracy.

What a strange sentence, I have had to re-read it myself only to sigh with disgrace – it is all true.

My intention is not to reprimand this young man for his childish enthusiasm; he is not to blame, that burden lies with his father, and all the other fathers in our great nation who are cradling their sons to inherit their failures. I pity them both but most of all, I pity the ordinary office workers in our High Commission who must have to answer to this prodigal son after having loyally served our country perhaps for decades with only the promise of a future rewarded with serving these sons of our masters.  Those who have the qualifications and have earned the right to be our representatives are forced to take the back seat and bequeath their hard earned positions to the children of our elite – how shameful.

A Pakistani professional working in London. He grew up in Karachi, Lahore and Islamabad and is actively involved with charitable organisations working in Pakistan