And the award for the best tablet from 2015 goes to… 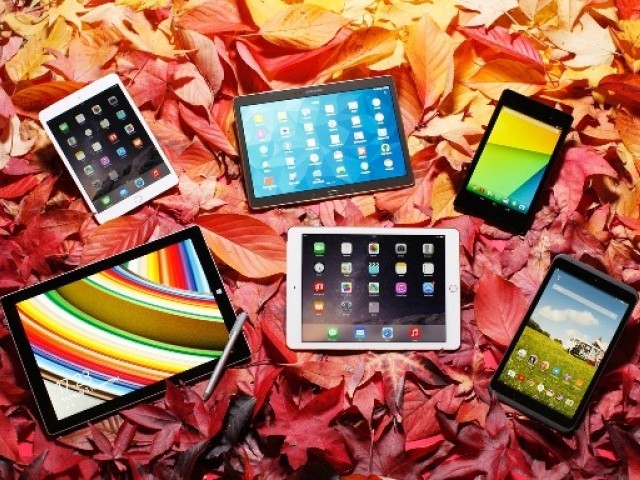 From the Tesco Hudl 2 via the iPad Air 2 to the Microsoft Surface Pro 3 – tablets to suit all budgets and needs. PHOTO: KATHERINE ANNE ROSE for THE OBSERVER.

In the age of mobile and easier access to internet, more and more users have grown accustomed to using smartphones and tablets. Some even avoid purchasing and carrying around bulky laptops that seem less portable as compared to a tablet. And this is also why top technology manufacturers are focusing more on tablets.

In 2015, all top tech companies released new hi-tech tablets. While Apple came out with great features, which came with a high price, Android also provided a great choice for tablet lovers. Let’s take a look at the top 10 tablets released in 2015:

Note: As choosing the best tablet is not an easy decision, important factors which have been considered in these ratings are display quality, battery life and overall performance.

Samsung Galaxy Note Pro 12.2 is a beautiful maxi tablet which comes with an Android OS version 4.4. The screen (12.2 inches) provides a beautiful display (as big as a laptop’s display) with a resolution of 2560 x 1600. It has a new improved Samsung user interface with a bright screen and also has a CPU Quad-core 2.3 GHz, which provides excellent working speed and is better than a regular computer or a laptop.

The Note Pro comes with 3GB of RAM and storage capacity of either 32 or 64GB. The device has a powerful battery of 9500mAh and has an eight megapixel rear camera and a two megapixel front camera.

With all the above mentioned powerful specifications and features, the performance is great and has the capability of becoming a productive device for professionals who want to use it for creative art work or business. The Microsoft Surface Pro 4 is a masterpiece from Microsoft. The tablet, unlike its predecessor, has a large display with a higher resolution. It has stronger design features than before and is sleek and slim at the same time. The form and look are definitely appealing.

As compared to the previous versions of the Microsoft Surface series, Pro 4 has a better keyboard fitting and cover along with a good functioning surface pen. This tablet from Microsoft is a testament that the company is progressing when it comes to making their tablets user-friendly.

The Pro 4 is also the first model to be equipped with Intel’s latest processor. This tablet is definitely worth your money!

The Google Pixel Chromebook is Google’s latest iteration from the Chromebook series. The tablet has a different feel as compared to Google’s popular Nexus series. The removable keyboard and the new aspect ratio are features that make it eye-candy amongst users.

As far as the specifications are concerned, Pixel C is powered by Android 6.0 Marshmallow. It has a 10.2 inches LTPS LCD with 2560×1800 pixel resolution. Furthermore, the RAM memory is quite impressive as well – 3GB along with expandable storage of 32 or 64 GB.

On the camera front, it has a powerful eight megapixel back camera and a two megapixel front camera. Sony Xperia models have occupied the hearts of millions along the years, through sleek designs and great features. Xperia Z3 Tablet is a perfect example of Sony’s excellence.

The positive points of the Xperia Z3 tablet is its powerful battery, light and relatively thin sleek design, and a sharp crisp screen with good resolution. The price is a bit higher as compared to other competitive tablets available, but Sony Xperia Z3 stands out as it’s waterproof. It was also shortlisted for top 10 best tablets of 2015 on Techradar. The Google Nexus has predominantly occupied the market with its excellence. This tablet is another trademark from Google. The Nexus 9 is a big-sized tablet with a relatively high price.

Nexus 9 has an Android 5.0 operating system with an 8.9 inches screen. The storage capacity of this lovely tablet is 16 and 32GB. It has an eight megapixel rear camera and a 1.6 megapixel front camera.

The most known issue in this tablet is that the back plate pushes out sometimes. The camera has also been observed to take poor quality photos and takes more time to focus as compared to other tablets.

It is considered a bit expensive than the previous model. Nexus 7 did a good job and now, Nexus 9 is a good replacement for Nexus lovers. Sony Xperia Z4 Tablet is a waterproof tablet with light weight and fast performance. The new tablet is being considered the ultimate rival to the iPad Air 2.

The operating system is Android 5.0. The tablet has a screen size of 10.1 inches with a screen resolution of 2560 x 1600. The storage capacity is 32GB. The rear camera is 8.1 megapixels and the front camera is 5.1 megapixels.

Its high-quality audio ensures that you can hear every bit of the sound. Digital noise cancelling capability nulls of every external noise that comes between you and your desired track. That’s fun indeed! Good for those who want better audio for transcription services. The Wi-Fi speed is 50 per cent faster than the older version of this tablet. The same improvement has been made in the octa-core CPU. But you have to get Z4 in your hands to believe all the awesome features it has for yourself.

The user interface is a bit problematic. This is the only negative aspect of this tablet that prevents it from achieving higher rating. The screen is very appealing and it has a nice combination of fine Sony elements. The most robust and powerful feature is the waterproofing ability. The tablet was also shortlisted for ‘best tablet of 2015’ awards.

All the versions of this tablet may not be available worldwide. The device comes in two versions which are 4G and LTE. This Samsung Galaxy tablet rivals the iPad Mini due to its thin design.

It uses Android 5.1 with the screen resolution of 1536 x 2048 and the CPU is Octa-core. It comes with 3GB RAM and a large storage capacity of 32GB/64GB. It also has an eight megapixel rear camera and a 2.1 megapixel front camera.

The MicroSD Card Slot, thinner design and high storage with good battery performance are guaranteed. The negative aspect, however, is the camera performance which is somewhat mediocre. Aside from a few upgrades, this tablet is very high on the rankings because of its friendly use for the web surfers. The iPad Mini 3 has almost climbed to the top of the ladder in the battle of best tablet choices. It is an upgraded version of iPad Mini 2 with the following specifications:

Siri is an intelligent personal assistant and knowledge navigator which is included in the device for free. It uses the artificial intelligence technology to correspond and react with real human beings. It is capable of making recommendations and perform actions by taking requests of the users. In addition to that, Siri can identify songs by using Shazam to listen to any song.

Having said that, it is a brilliant tablet with all the features of a classic iPad. iOS 8 works great on it and provides good speedy processing capabilities. When it comes to the best choice for 2015 tablets, the iPad Air2 has been the ultimate winner and ranks as a perfect tablet. Let’s take a look at the fabulous details of this masterpiece.

Unlike its predecessors, the mute lock switch has been removed. The user has been provided the choice of using the control centre if they want to use this feature. If we compare it with iPad Air, the battery life is bit less.

The tablet is excellent in terms of its sleek beautiful design, light weight, powerful battery and huge RAM. On the other hand, the negative point is that the storage space is 16GB and which doesn’t seem sufficient enough to me for a tablet. The screen is vibrant and its TouchID is superb.

It is a perfect package without any major flaws. Microsoft has not been able to match up to iPad Air 2 yet which is still the topmost priority of the tablet users. The Apple iPad Pro needs no introduction. This tablet has, undoubtedly, been the best tablet of 2015. It is the fastest and the biggest tablet, ever produced by Apple. This one is definitely for designers, artists and those who love digital illustration.

The giant screen of this Cupertino giant, along with quad speakers, is the perfect choice for watching videos, multi-tasking and split-screen apps. The iPad Pro has a massive 12.9 inches display. Moreover, the tablet is slim, hence it isn’t so heavy. The iPad Pro has 1.2 megapixel front and eight megapixel back camera. The device also includes a fingerprint sensor. As per Apple’s claims the device can last up to 10 hours of battery.

iPad Pro has 4GB RAM with 32 and 128 GB expandable storage options. The device is powered by Apple’s latest 64-bit A9X and M9 processors. The processors assure it’s fast speed. If I were to rank, this tablet would be the best one to buy for 2015. The choices mentioned above come under the ‘best tablet of 2015’ category, but if you still want to look further into other products, then the following options are given for that purpose.

Dell Venue 8 is lightweight and has a large screen which comes with all the good features such as camera, high memory and speedy processor. This tablet is the best choice for photographers with the innovative Dell gallery feature for photography. Brace your pocket for this brilliant Microsoft tablet. Microsoft Surface pro can also be a choice for Windows tablet lovers with an extra detachable keyboard. Are you satisfied with 2015’s releases in the tablets category? Do let us know your favourite one!