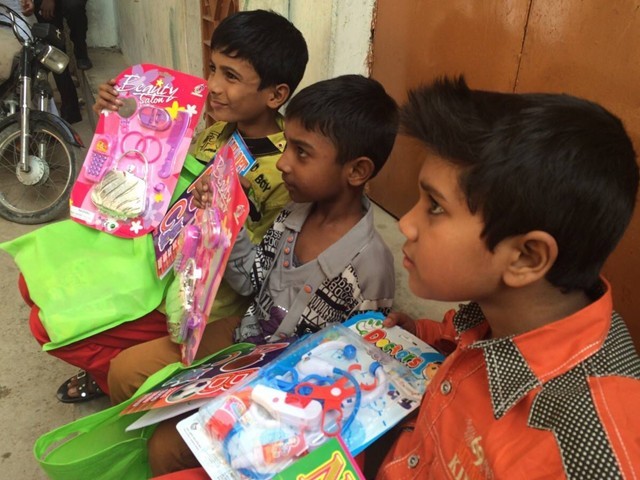 Full disclaimer: I’m writing this because the lovely blogs editor who sits across the room from me thinks it’s important you and I discuss my toy drive. So hello reader, let me tell you about the Xmas Toy Drive. Ok, that sounds like the pen pal letter some poor sod wrote in fifth grade and then wondered if the reply got lost in the mail.

As you can see, I’m not very good at selling myself — no pun intended. But see, here’s the thing, I don’t need you to buy something from me. I can’t sell you much to begin with. Do me a favour, would you. I just need you to stop for a couple minutes and think about the big days of your childhood. The ones that got you excited weeks in advance.

Remember the build up a few weeks before your birthday — every whispered conversation in your house could possibly be a plan to throw you a surprise party. At some point somebody would finally ask you,

“Beta what do you want to do on your birthday?”

There might be a twinge of disappointment that there would be no surprise, however, there was always the birthday to plan. I always wanted Tweety on my cake, those fancy jobs where Tweety looked real, not like it was run over by a truck in a toon. The night before my birthday I would go to bed slightly nervous with anticipation about all the presents I would get the next day. Nothing is more satisfying than getting presents all wrapped up in pretty paper, holding countless possibilities inside.

Oh and remember Eid? Eid really played on the build-up. Especially if people in your family fast. If your family was like mine, the countdown would begin after the 18th fast or so; you would hear your family talk at the dining table about when that elusive slip of a moon would be sighted by the committee of old men – would we fast for 29 days or 30. Then there was the (slightly annoying task of) buying clothes; I mean, new clothes apparently signified the sacrifice of only eating two ginormous meals a day for a month. Regardless, I’m sure you can, even now, taste the anticipation in the air the few days before Eid, and recall how exciting it was to mentally count how much eidi you might get and if you just might take in more than the year before. The exciting few days ahead promised to be better than what you could imagine.

Well, I say, there is a joy that lies in the surprise or anticipation. And “‘Well,’ said Pooh, ‘what I like best,’ and then he had to stop and think. Because although eating honey was a very good thing to do, there was a moment just before you began to eat it which was better than when you were, but he didn’t know what it was called.”

That’s why we are having this conversation, by the way. I need you to understand that here, in the green part of the flag, anticipation around festivities is lovely. Over there, in the white part of the flag, unlike Winnie the Pooh, we know what to call anticipation: disappointment. And I hate talking about this because I sound like a patronising douche, that I know what people are experiencing when I clearly don’t live their lives.

But trust me; I’m forced to explain my toy drive, to entice you into donating, because for some reason you don’t get why it is important to bring joy to children. Especially children who live under plenty of uncertainty and poverty because they live in the white part of the flag. I have to explain why my toy drive is only for the white part, when no one else has to explain why LIFE in Pakistan is for the green part.

I know, crazy right? That I have to justify why I give toys to certain children. Why don’t I do a Ramazan toy drive, you ask me? Oh wait, I can’t hear you because someone else wants to know why I choose to only give to Christians. Well, since I am here, I might as well discuss this too.

Weirdly enough, it wasn’t the 11 years of being at a convent school which made me develop an opinion about Christmas. The school was a place of learning, so religion or festivals were never a big part of our school life. We had a Christmas play and we had a Milad, so it never was about the spirit behind either. I was in the UK when I first saw that there was a certain unifying beauty about Christmas. The joy that is jangled about in jingles and carols actually becomes a bit palpable, once you block out Commercial Christmas. I think you know what I am talking about, the joy that comes with sharing.

So yes, my toy drive actually does borrow from the spirit of Christmas that is bandied about in feel-good movies. I decided one day while sitting at work that we need more joy and we need to share it with the people who need it the most. Children.

Maybe you have a child or two or maybe you don’t, but you do see the logic there right? Happy children. I can argue many theories of development which talk about how being happy is essential to growth and learning, but even a child-averse person like me sees why it is important to keep the little ones merry. Because you and I can never forget what a happy childhood feels like, because either we had one and are all the better for it or we didn’t and always yearned for it.

Not saying the goody bags I collect money contain gift-wrapped harnessable joy, but you and I both know the power of a present when the intent isn’t buying your way out of trouble. I’ll say it again for your sake: Especially for children. Especially in a country where joy is doled out in unequal parts. And the next part is hard for me to say, but I did try to leave all my politically correct, feminist, use-neutral language barriers at the door when I sat to write this piece. This drive is for children who celebrate Christmas because, hell, how many people do you see trying to make Christmas special and how many charitable organisations do you see year round trying to help their Muslim brothers and sisters. It’s time for a cross-over, some inclusivity please.

So this is unabashedly a Christmas toy drive. I have done Ramazan toy drives where I was sick to my stomach, where people asked me before handing out money if it was for Muslim children because, of you know, Zakat. I don’t judge your intentions, I respect your choices, but I guess I don’t understand why you would need to determine a religion before you give children books and toys.

I want the Xmas Toy Drive to become something children in Karachi anticipate around December 25. I don’t promise a Santa but, I promise to reach out to children with my friends, bearing some gifts and love. And that’s only possible if you dig deep into your childhood and remember the thrill of festivities lies in knowing people are celebrating something together.

Don’t forget to donate to the toy drive after you read this, because I know I might have ticked you off but I know deep down you agree with me — we do it for the children.

Naya Pakistan, where Salmaan Taseer's murderer is a hero