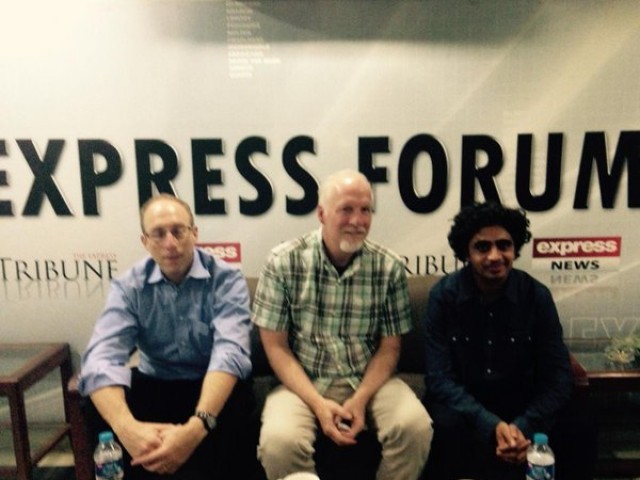 My gratitude can be seen in many different ways; not only have I filed over 1,600 stories for my paper, I can also recall the names of every colleague who has helped me execute each one of those stories. PHOTO: TWITTER

It was a cold sunny morning, in March 2010, when I was given the opportunity to work with a young dynamic team that would be a part of an upcoming newspaper. We, as a small team at our Islamabad office, had started telling people that we were working for The Express Tribune, a paper affiliated with the New York Times, to be launched in a couple of months.

“We don’t know what newspaper you guys are talking about,” almost everybody responded.

“We will talk to you when this paper actually launches.”

To our horror, most of the people we called slammed their phones on our faces. This went on till the paper finally launched. It was after the official launch that we kick-started the parade of reporting for the paper. We put in our best efforts and filed the best stories we could.

In the first year we struggled to bring in solid, newsworthy content, particularly because people were wary of our paper and could not understand how a paper could be run by such a young team. They never truly understood that this young team was going to change the direction of news in Pakistan.

Soon after the launch, however, people started discussing Tribune’s stories everywhere. This young but dynamic newspaper had the courage to take up bold issues that conventional media outlets steered away from. Within a short span of time, Tribune was making waves. The foundation of the media empire shook to make place for this new progressive vision accompanying the paper. Today, with the help of the team and our legendary journalist, Muhammad Ziauddin, we stand neck to neck with Dawn and The News, surpassing The Nation and Daily Times.

As an emerging journalist, the encouragement reporters receive is wonderful and apparent in the kinds of stories this newspaper carries even today. With assistance from seasoned and slightly young editors, much to the chagrin of our competitors, we planted the seed of this newspaper firmly in the ground of the Pakistani media fraternity.

Not only has this paper encouraged its editors and reporters to think out-of-the-box, they facilitated it. During my stay at the Tribune, I went to India to become a fellow at the Centre for Science and Environment at Anil Agarwal Training Institute, attended the Summer Academy 2012 at the International Institute for Journalism in Germany, became a SAARC fellow to represent Pakistan at the SAARC headquarter in Nepal, became a fellow at the International Centre for Journalists in Washington DC, followed by becoming an Alfred Friendly Fellow in 2014 where I worked at The Kansas City Star and McClatchy DC. I also got the opportunity enrol at the University of Missouri to learn data and investigative journalism in Columbia. This exposure not only helped me grow as a person, but as a professional as well. I got to report from India, Norway, America, Sri Lanka, Nepal and Germany, and learnt how reporting was done differently in all parts of the world.

This year, the Global Investigative Journalism Network invited me to present my investigative story in Norway. A week ago, I started writing for The Washington Post on issues related to Pakistan. Everything I have on my career plate, I owe to The Express Tribune, my colleagues and all the people that helped be grow into the journalist I am today.

My gratitude can be seen in many different ways; not only have I filed over 1,600 stories for my paper, I can also recall the names of every colleague who has helped me execute each one of those stories.

During my time here, the paper has witnessed many successes and also came across a few testing times. Many people have come and gone, but the one thing that has remained is the vision of the paper. I am proud to recall how this great team was created and the number of very unique events that made us a great crew. Looking back, it is hard to deny that Kamal Siddiqi, the editor, and Bilal Lakhani, the publisher, know just how to build a great team and how to recruit the best talent; they have the ability to put the best things together in exactly the right way. Thus, Tribune has an unsurpassed network of employees.

Many have come and gone now, but my 2,170 days being a part of Express Tribune’s pioneer team were some of the most memorable times of my career.

I learned, under the leadership of Mohammad Ziauddin sb that ideas could be unconventional and more fantastical in nature, under Kamal Siddiqi I learned that no idea was a bad idea so long as it remained in the boundary of ethics; he also encouraged me to avail prestigious fellowships. Under Gibran Peshimam and Naveed Hussain, my favourite copy editors, I was able to qualify for these fellowships and get the kind of appreciation people only dream of getting. And for all this and more, my gratitude will never be enough. In the end, I would like to say, with a heavy heart, that I still believe in the vision of this paper and hope that Tribune lives a long prosperous life and keeps shining in the years to come.