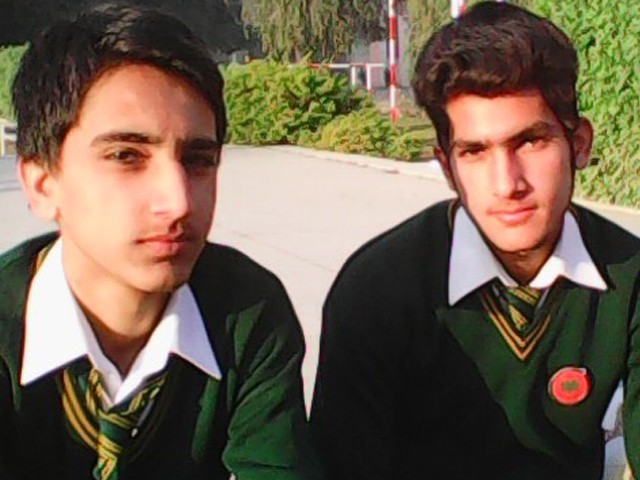 Shahab, my sister, tells me that I look like him. Whenever our father sees my face, he sees Shayan. I avoid him a little at home, because I know how much it pains him to see Shayan’s smile on my face, his gait in my walk and his sparkle in my eyes.

On December 16, 2014, the lives of my family members changed forever. We were a happy family of four brothers and two sisters. And now, we are a family with an empty chair at the dining table, an empty bed with an extra pillow and a dry toothbrush that hasn’t been used for a year. After Shayan’s death, all that we have left are extra, empty things.

We live close to Army Public School, so when the attack happened, we experienced the whole thing through sound. We heard gunshots and blasts. I still can’t get the whirring of helicopter fans out of my head.

One of our neighbours rushed to our house and told us that APS was under attack. My sister called our father right away. She punched the numbers in hastily. Her voice quivered to the rhythm of her shaking body.

Our father had already been present outside the gates of the school. He told us that the terrorists were firing relentlessly.

The thought that those bullets were actually hitting real bodies of real children made my heart shrink into my chest.

I stood in my living room, dumbfounded, that my school, the school I had graduated from a year ago, was being riddled with bullets and bombs.

Our father rushed to the hospital.

“Shayad hospital main mil jai,” he said over the phone.

(“Maybe we’ll find him in the hospital.”)

Children shouldn’t be found at hospitals, I thought as my heart sank lower and lower.

Our father instructed us to go to our village; Sangu, near the Khyber Agency. All of us got into a car and left Peshawar.

Shayan’s body was brought into Sangu later by my father. Along with the body of my cousin, Farhan. Shayan’s best friend, Zeeshan, also died in the attack.

We found out later that Shayan had been in the auditorium when the school was attacked.

My mother lost a huge part of herself that day. She hasn’t been the same since then. We are all afraid to leave her alone in the room because we fear that she is no longer emotionally stable. She surrounds herself with all of Shayan’s belongings; all the extra, empty things.

It’s been a year and she hasn’t had dry, tearless eyes for a single day.

(Mom, dad doesn’t go the mosque after he has had dinner).

To thwart my father’s laziness, my mother would purposefully delay setting up the dinner table, so all of us could go the mosque at Shayan’s behest.

The night before that fateful day, when many of the things in our house became empty and extra, Shayan had kept an alarm for 5 am so he could wake up for fajr.

I often think about what he prayed for hours before he was taken away from us.

Did he pray for better grades in his Grade 10 exams?

After Shayan had scored 435 out of 525 in his Grade 9 exams, our mother was furious. She scolded him for his disappointing performance in school and reminded him that his dreams of becoming a scientist could not be realised without having top scores in his class. She told him that to be able to get into Ghulam Ishaq Khan Institute of Engineering Sciences and Technology (GIKI), his dream school, he had to work a lot harder.

Shayan had listened earnestly and then promised our mother that he would wholeheartedly commit to his studies. He was the most astute of us all, so he struck a deal. If he were to get 950/1000 marks in his Grade 10 exams, he would be allowed to join a cricket academy for his summer vacations. Our mother knew how much he loved cricket, so she offered her hand, and the deal came into effect.

Perhaps he prayed for an improved batting form.

Shayan was a huge cricket enthusiast. That’s all he watched on TV. We used to find him glued to the screen, watching old Test cricket matches. He would study the field arrangement, the batsman’s stance and the bowler’s action so he could improve his own game. His absolute favourite batsman was Chris Gayle, and Ahmed Shehzad was a close second.

Shayan was unique amongst his friends because he was a left handed batsman. His friends used to fondly call him “Lefty”. They visit us often because they miss him on the pitch.

Maybe he prayed that he would win against his sisters at badminton.

He liked to goof around with Shahab, our sister who is now 18-years-old. They used to have intense badminton matches after school at our house. Shayan was very competitive and our sisters did not go easy on him. They used to spend all afternoon whacking a shuttlecock back and forth, until our mother would call them in for dinner.

Could he have prayed for chicken biryani for dinner?

It was his favourite.

His revulsion of vegetables is something my mother still recalls fondly. He would refuse to eat anything that was not meat. Except apples, he loved apples.

Or, maybe he prayed to become as fashionable as other boys his age.

Three or four months before he died, Shayan had started taking an interest in his clothes and his hair. He had started dressing like older boys. He would spend ages in front of the mirror, experimenting with hair gel. We would tease him, but he was proud of the way he looked.

For all I know, he could’ve prayed to God to finally make him taller than our father.

I remember that from when our family would sit together after dinner; Shayan would measure his height against our father’s, who is a tall man in the Army. He would then tease him that he is almost taller than him. He had us all in fits of laughter. His crazy, funny antics made him the favourite of his sisters. Our eldest brother, who lives abroad, would watch him with a bemused expression on his face when he visited. He loved Shayan’s confidence.

All of us knew that Shayan’s intelligence was unparalleled to anyone in the family. We knew that one day he would achieve all the success he desired. Watching him study, play cricket, laugh around made us ache with pride.

I don’t know what Shayan prayed for that fateful morning. But I’ll tell you what I’m praying for now.

I, along with the rest of the families of the APS attack in Peshawar, are praying for peace. We understand that we have dark times ahead, but we are praying for the safety of the children of this country so that no household suffers the anguish of extra, empty things.

The author is a graduate of Army Public Scool Peshawar and is interested in national affairs. He tweets as @shafilog (twitter.com/Shafilog).