For some, West Pakistan may be home but East Pakistan will never be forgotten 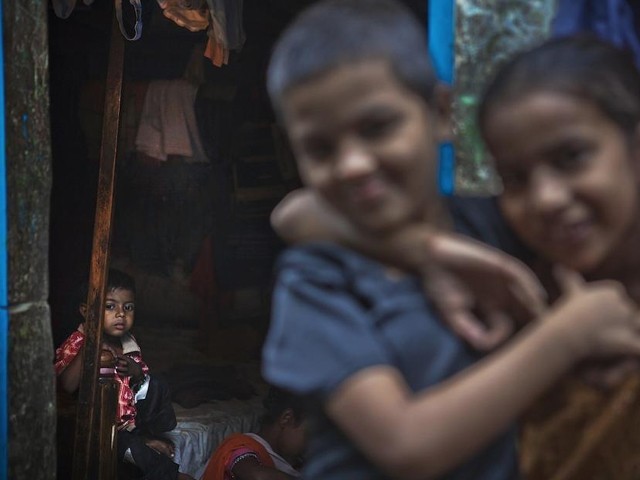 During the 1971 Liberation War of Bangladesh, the Biharis were accused of supporting West Pakistan and even now many view them as traitors. PHOTO: ALJAZEERA

When people would ask me my ethnicity, I used to proudly declare that I am Bengali. This was before I understood the concepts of nationalism, citizenship and belonging. I learnt in my adolescent years that I am, in fact, not Bengali. I am not even from Bangladesh. I have Gujrati origins, and my great grandfather and his family lived in East Pakistan for 24 years after partition.

My father only spent seven or eight years in East Pakistan before moving to West Pakistan during the war. Both, my great grandfather and my grandfather, whom I knew closely, spent an important part of their lives in East Pakistan. I have never been to Bangladesh but I feel like a part of me is attached to that piece of land I cannot call my own.

Therefore, when the time came for me to choose a topic for my independent study, I decided to delve deep into understanding my own complex national identity. I had several questions that were begging to be answered:

Why did I feel connected to Bangladesh?

How could my grandfather’s memories and experiences have resonated with me so strongly that for 18 years of my life, I actually thought that I was of Bengali origin?

Why was it that whenever Bangladesh won a cricket match, I secretly felt happy?

Growing up, I always knew that Bangladesh held a special place in my grandfather’s heart because his dessert always came from a bakery called ‘Dacca Sweets’ in Karachi and my parents mostly employed labourers of Bengali origins at our factory.

Fish and daal chawal was a regular dish for lunch at home. I found out, quite later on, that most Pakistani households do not have a particular affinity towards that dish.

While travelling, my grandfather would always stop to talk to anyone who was from Bangladesh. I remember him telling me stories about how he went from being the son of a hawker at a train station to being the owner of industries and businesses not just in Pakistan but also the United Kingdom. I fell in love with his adventures in East Pakistan and in the process appropriated that land for myself as well. He lived in Pakistan for over 35 years but he never forgot the time he spent in East Pakistan. He longed to go back and visit the house he built there but he never did. I inherited his longing and his pain for his home.

When I began research for my independent study, I found out that I was not the only one who felt this way. There were Biharis at my university who grew up with memories of East Pakistan and felt attached to a land where they are no longer welcome. They have it worse than anyone else because up until 2008, they were not even legal citizens. They were persecuted for being “Urdu-speaking” and labelled as traitors by Bengali nationalists. Post 1971, the Bihari community made a formal request to the West Pakistani government to provide asylum but the request was denied. They were essentially ‘stateless’.

Abeera Akhtar, one of my interviewees, told me that every Eid, her father and her uncles get together and talk about their lives in East Pakistan. Abeera’s family is from Chittagong and her father and uncles grew up in East Pakistan. Her father was 12-years-old when the war broke out but her uncle was 17-years-old and was old enough to be involved with the Red Cross’ rehabilitation efforts. She narrated the story of how the Mukti Bahini came to her grandfather’s house. Her grandfather was in hiding and they abducted her uncle. Fortunately, he escaped and returned home months later.

Eventually, her family moved to Karachi when living in East Pakistan became unsafe for the Bihari community. They left everything behind; their house, possessions, neighbours and friends. She added that even though her family suffered and was under threat from nationalists, on Eid dinners they only have fond memories of East Pakistan. She told me with an amusing glint in her eye that her father knows very little Bengali and once, on vacation, a Bengali fruit seller referred to him as “Bengali Bondhu”.

Her father and her uncles have been planning on visiting Chittagong, where they grew up, but have been delaying the visit because they heard that the neighbourhood they grew up in is nothing like it used to be. They searched for their house on Google maps and found the warehouse and the lake that was near their home. They were able to spot the street of their residence as well.

Last Eid, Abeera’s father and his siblings made dahi bhallay all night to honour an important tradition from their childhood in East Pakistan. When asked about the relationship with her family’s Bengali neighbours, she told me that her grandfather mentioned that not all Bengalis were against them. A Bengali family had hid her paternal uncle from the Mukti Bahini.

Finally, she mentioned how a huge part of her life has been about these memories of Chittagong, now a part of Bangladesh. Her family was constantly threatened by the Mukti Bahini but it’s the fond memories of their school life in Chittagong that her uncles and her father discuss, not the brutality of the nationalists. From the recollection of her father’s stories, I could tell that he, despite having to swap homes, has not really forgotten his first one. East Pakistan still forms an important part of his consciousness.

My next interviewee was Junaid Ahmed whose mother lived in East Pakistan. He grew up in a household with traditions and values adopted from his old home. He mentioned that if it ever rained on a Thursday, his mother would get all the servants to cover up the lawn chairs and move everything indoors because of jummahraat jhari (Thursday showers); the common belief in Bangladesh that if it rains on a Thursday, it will rain for the rest of the week. His mother and his maternal grandmother rarely wear shalwar kameez; they almost always wear saris. His mother speaks fluent Bengali and talks to the Bengali housekeeper in her native language as well. Junaid’s parents now live in Jeddah, where he often finds his mother watching Bengali TV channels.

When my grandfather passed away last year, it made me realise how important his memory of East Pakistan is to me. His stories and values shaped the way I was brought up. Nationalistic forces took away his country but it could not take away what was important; his love for his home.

His death also made me realise the importance of telling stories. The stories of those who experienced these wars need to be recorded to form an alternative narrative. The state narrative does not project how people were really affected by the decisions of those in power. Women, children and minority groups have little or no voice. Their stories need to be heard to get a better perspective regarding what really happened during partition and the 1971 war.

A few years ago, I was in Rome and a Bengali street vendor found out that we were a group of Pakistanis. He refused to sell anything to us and called us ‘kominas’ (scoundrels). I tried to tell him that I was like him, and that my family had lived in East Pakistan, but he did not listen.

It was years later that I concurred that I was not like him. I had been labelled as ‘the other’. Nationalism and state politics tore apart an entire country. People like Abeera’s father, Junaid’s mother and my grandfather had to leave a land that was dear to them and settle somewhere else. They lost their home and had to search for a home elsewhere. They might have found one in Pakistan but East Pakistan will never be forgotten.

The author is a LUMS graduate. She currently works at Special Olympics and is a football coach for toddlers. She doesn't remember her Twitter handle.