Condemning Trump’s bigotry does not make you any less of a bigot, Netanyahu 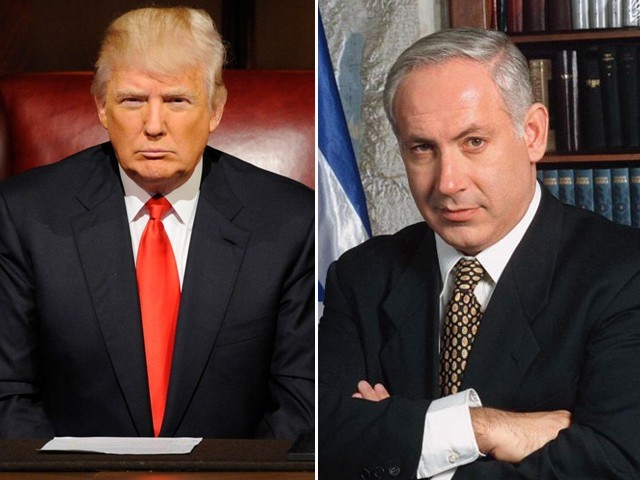 Netanyahu decried Trump’s call to shut down entry of all Muslims to the United States.

When Benjamin Netanyahu wags his finger at Donald Trump for his bigoted remarks against Muslims, a simple eye roll should suffice as political commentary. But it’s not difficult to explain exactly why we’re dumbstruck by the irony of the Israeli prime minister’s statement.

Joining a chorus of condemnations from world leaders, Netanyahu decried Trump’s call to shut down entry of all Muslims to the United States, adding:

“The state of Israel respects all religions and strictly guarantees the rights of all its citizens.”

Having wiped off the coffee we’d accidentally sprayed upon our computer screens, liberals around the world marvelled at such straight-faced deceit. This joins a long list of official Israeli claims that are demonstrably untrue, like Israel not possessing nuclear arsenal.

Israel has been practically applying many of the Republican-approved profiling methodologies for years; except that it has the political sense to not regularly boast about them on world stage. Israel is renowned for social and political policies that discriminate against Palestinians, Arabs and Muslims – that Netanyahu either inherited from his preceding regimes, or established under his own.

That’s not my opinion. That’s the position of the US consulate in Jerusalem:

“US citizen visitors have been subjected to prolonged questioning and thorough searches by Israeli authorities upon entry or departure. Those whom Israeli authorities suspect of being of Arab, Middle Eastern, or Muslim origin… may face additional, often time-consuming, and probing questioning by immigration and border authorities, or may even be denied entry into Israel or the West Bank.”

In 2012, an article appeared in the New York Times, with a title that precisely contradicts Netanyahu’s baffling claim. Penned by an Israeli citizen married to a Palestinian woman, it explains in harrowing detail, the “logistical nightmare” they face when traveling into or out of Israel or the Israel-occupied West Bank.

The author, Yousuf Munayyer, embodies the frustration of countless Palestinians, and their Israeli family members. If anything, it may be assumed that his wife’s marriage to an Israeli citizen likely affords her a few ounces of privilege that are denied to Palestinian citizens generally.

A Jewish person, from anywhere around the world, can move to Israel, citing the ‘Return of Return’ policy. If Netanyahu’s statement is to be trusted, one must presume that it’s equally uncomplicated for a Palestinian refugee to return to his own land in Israel or its occupied territories.

Ahmed Tibi, a member of the Israeli parliament, condemned Trump as his prime minister did, but added that,

“The things he said are not unfamiliar to some of those here who serve in the Knesset.”

This is monstrously true. Earlier this year, the Deputy Interior Minister of Israel, Yaron Mazuz of Netanyahu’s Likud party, demanded the Arab members of the Knesset hand over their ID cards, saying:

“We’re doing you a favour by letting you sit here!”

Even in Pakistan’s climate of intense religious and ethnic intolerance, it is difficult to conceive a Member of National Assembly (MNA) telling the ‘Pakhtun’ members of the parliament to turn over their IDs and get out.

There are statements that are ignorant, and statements that are deliberate and outright lies. And few understand that better than Netanyahu himself, who famously complained about Arabs coming out “in droves” to vote against his “right-wing government”, implying that the elections were a fist-fight between Arabs and Jews, as the political opinions were firmly divided along racial lines.

Trump’s greatest sin, ultimately, is dragging the political arena so far to the right, that the most dangerous right-wing bigots of yesterday now look like mild-mannered centrists.

Lindsey Graham, who ignorantly said that everything in the Middle-East starting with the word ‘Al’ is “bad news”, is now being applauded for telling Trump to “go to hell”.

Condemning an obviously bigoted statement like Trump’s is not the litmus test for being a ‘good person’. That is basic decency expected from all semi-literate people of the 21st century.

Trump – in many ways – is Netanyahu’s flamboyant Israeli twin; one who brashly vocalises the kind of discriminatory policies that the Likud party often seeks to implement in the shadows.

Let us now pray that Netanyahu’s statement marks the final act of the condemnation-circus put on by world leaders for cheap applause, as they continue walling, repelling, and bombing Muslim populations in places that mainstream cameras do not explore.