He suffered because Pakistan’s government does not care about healthcare 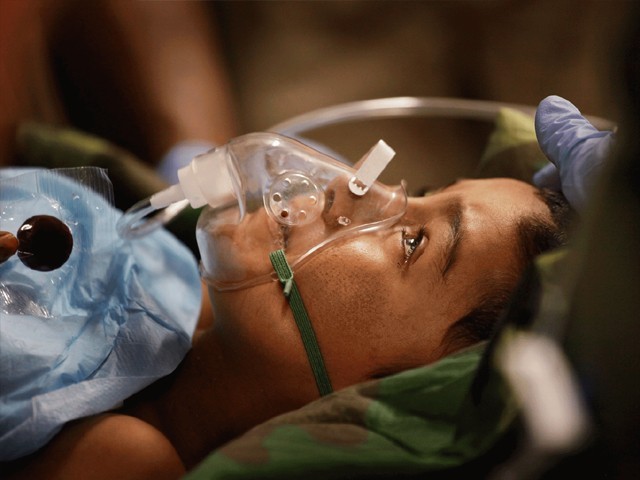 One doctor at a public hospital in Pakistan is supposed to cater to about 1,724 people. PHOTO: Scott Olson/Getty Images

I am not a doctor, and this wasn’t a scheduled trip to one of the biggest hospitals in Lahore. It was a sudden, urgent need. Just moments after switching off the Xbox and lying on my bed, I felt extremely nauseous.

My family members (God bless them) rushed me to a hospital and by the grace of the Almighty, I was in stable condition within an hour.

To my surprise, there was only one Electrocardiogram (ECG) machine on a gurney carried around throughout the Emergency ward. So, in case two patients needed it at the same time, which is obviously a frequent occurrence at the government hospital, one has to wait his/her turn.

After my condition became stable, thanks to the doctor’s tireless efforts, I was told to rest. Relieved that everything was alright, I lay my head down on the bed. It was only when I turned my head to the right of my bed that I was forced to acknowledge my surroundings. There was a patient lying on the bed next to mine. He was from rural Punjab. When my relative inquired as to his illness, he was told that the man worked in the fields and got injured during work that day. The village doctor had not given him a Tetanus shot and his condition deteriorated. As a result, he had to come to a hospital hundreds of kilometres away from his village.

Tetanus is one of the agonising side-effects of normal accidents that we all experience in daily life. The inability of the patient to get himself a Tetanus injection during a specified time after the injury exposes him to a disease that is brutal.

After giving him the necessary medication for the time being, the doctors ordered the ward-boy to check the hospital for the availability of a bed with a ventilator.

Yes, that’s right. Every bed in a public hospital does not have a ventilator. In Lahore, only 155 mechanical ventilators are available for more than 500,000 patients every month.

This patient, sadly, wasn’t lucky enough to be given one.

Therefore, the patient who had come into the hospital on his own two feet became unconscious after some time. The patient’s attendants were praying – not for the health of their patient, but for a ventilator.

Isn’t that the saddest thing?

Fortunately for me, I was up on my feet and ready to go, but the worker from rural Punjab was still in a state of unconsciousness, waiting for a ventilator. I prayed to God to let it be his turn soon. The sad realisation I had, whilst praying, was that in this particular situation, for this man to get a ventilator, someone else would have to be taken off of one. Somebody had to die.

At the time, the thought filled my heart with sorrow, but now I am seething with anger.

Consider this: The life of your loved one hangs in the balance because the hospital does not have enough medical equipment. Thus, a treatable disease could lead to death.

Every year 22,000 women die of entirely preventable complications linked with maternal mortality and 423,000 children under the age of five die due to preventable and treatable diseases. Pneumonia alone takes 100,000 lives.

For the family members of the ill, the lack of healthcare services is a painful fact to deal with. For the hospital staff, however, it is an ordinary and acceptable occurrence; fate.

Pakistan has 919 hospitals, 5334 basic health units (BHUs) and sub-health centres, 560 rural health centres (RHCs), 4712 dispensaries, 905 maternal and child health (MCH) centres and 288 Tuberculosis centres. This network of healthcare institutions is supposed to cater to the needs of around 190 million people.

This means that one doctor at a public hospital is supposed to cater to about 1,724 people.

Not only is that ratio ridiculous, it is bordering on criminality. Our government’s lack of initiative and commitment to the healthcare sector has led to countless deaths, mostly due to negligence; a reason so insignificant that it boils my blood.

Why is it that the government has not installed the necessary medical equipment desperately required by the public? Why am I reading about plans for a Disneyland in Lahore in the newspapers and not the inauguration of adequate medical facilities?

When will the leadership in this country take note of these issues? How many people have to die for them to make healthcare their priority?

For all our sake, I hope, not too many.

An engineer in the making, he is an avid Liverpool fan in a country where cricket holds the number one spot. He has written articles and his favorite topics include statistical analysis, opinion based articles and previews. He tweets as @Amirbashir3 (twitter.com/AmirBashir3)

Surrendering the title: A stepping stone to Liverpool’s success?