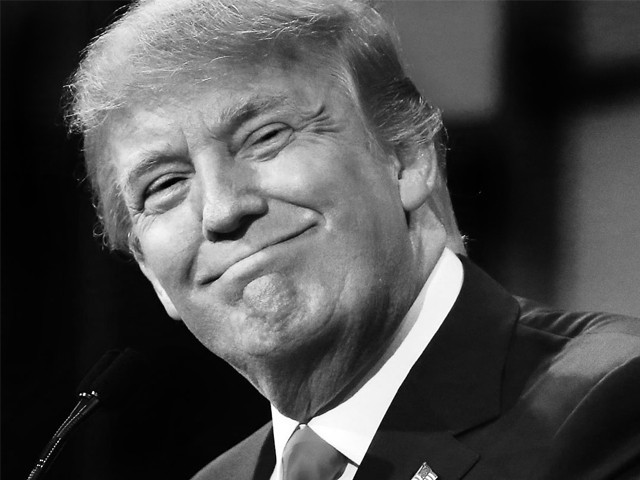 If you want to protest him, if you want to stop him enacting his rules, don’t just wait till elections — go and investigate how his plans are being played out right now, and fight those. PHOTO: Scott Olson/Getty Images

People are calling Donald Trump’s call to ban all Muslims from entering the United States “ridiculous” and “contrary to our views as Americans”. Some have pointed out that this isn’t really surprising: the other Republican candidates have not-dissimilar platforms, and Trump is just playing off already existing Islamophobic sentiment.

What really shouldn’t be surprising is this: the plans he’s proposing are already policy — not just in the US, but worldwide, particularly in Western/Anglo sphere/Five-Eyes countries.

Post 9/11, visa and immigration policy to the US has been targeted directly against Muslims by targeting countries with a significant Muslim population. Muslim countries saw their requirements for getting US visas tightened, in some cases to impossible standards. If you were an 18 to 30-year-old Muslim male with a passport from a relatively “underdeveloped” country, God help you try and get to the US.

Palma Yanni claimed that the plan would be “doomed by practical factors”:

Beyond the legal problems, Trump’s plan would also likely be doomed by practical factors, such as the difficulty and intrusiveness of questioning potential immigrants based on factors such as their surname. And religion “is not on any passport that I’ve ever seen,’’ said Yanni, who labelled the plan “impossible”.

This is already the case.

There are plenty of reports of people being denied visas because of their Muslim (sounding) name. The Pakistani passport does list your religion, which already has made life difficult for some trying to get into the US. In some cases, like Malaysia, your passport is linked to your national ID, which has your religion listed. And this doesn’t just apply to passports and immigration — there is already evidence that Muslims or Muslim-seeming people are discriminated against in job-hunting and education.

Besides, they don’t need to know your name or official religion to decide if you’re Muslim or not. The country is a dead giveaway, for starters. But an extra subtle way is to see if your passport has this line:

Many countries in the Muslim world do not recognise Israel or have diplomatic ties with Israel. This is due partially in solidarity with Palestine and against Zionism, though it’s also likely due to anti-Semitism. (That said, this provision doesn’t necessarily stop people from trying — and succeeding.)

The US wasn’t the only one that tightened up immigration regulations for Muslims following 9/11. In 2003, Canada suddenly decided that Malaysians now need visas to enter the country (they didn’t previously), yet shut down their offices in Kuala Lumpur  — so any Malaysians hoping to head to Canada have to go to Singapore. Australia is tightening immigration and social services as a direct response to The Islamic State of Iraq and the Levant (ISIL). Visas for Europe, including the UK, have also become harder to acquire.

Nobody brought up “violation of international law” when Western countries across the world decided to make immigration and travel hellish for anyone with a Muslim passport, appearance, or name.

The hair-splitting about US citizens and lack of Constitutional protection outside US borders falls apart when you consider that there are people within the US borders that are not citizens. It’s not just undocumented folk — its permanent residents, visa holders, people in transition from one visa to another, asylum seekers, refugees. They would be the first to be affected by policies like these, because they are the most vulnerable.

And that “rationale” about blocking people from certain countries if their countries are having civil war? That’s exactly why you should let them in; they’re trying to escape to safety! The radical Islamists are no friends to civilians either; punishing them for suffering is inhumane. (Though very little, if anything, about immigration is particularly humane).

More and more I think Donald Trump is actually being upfront, honest, and explicit about policies that are already happening and affecting people right now. If you want to protest him, if you want to stop him enacting his rules, don’t just wait till elections — go and investigate how his plans are being played out right now, and fight those.

The author is highly interested in issues of liminality, inclusivity, and intersectionality, especially in arts, media, tech, education, and activism. She is currently open to opportunities in Malaysia, Australia, and elsewhere. She tweets as @creatrixtiara (twitter.com/creatrixtiara)