UAE’s National Day: Why are we celebrating a place like Dubai? 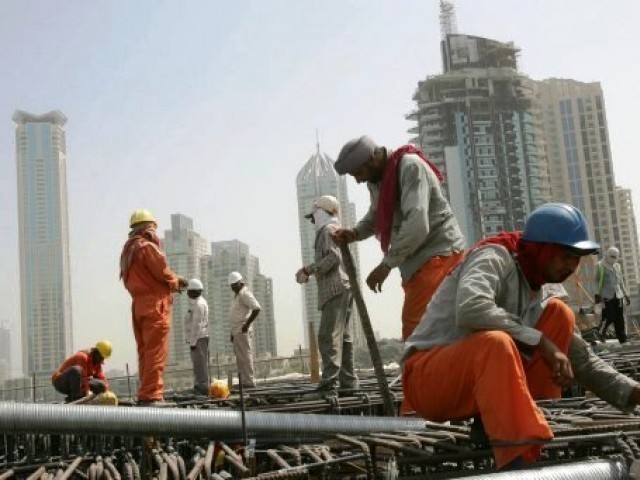 The sponsorship system practised in the Gulf's oil-rich Arab states have been criticised by human rights organisations. PHOTO: AFP

United Arab Emirates (UAE) recently celebrated its 44th National Day on December 2, 2015.  As expected, Pakistanis residing in the UAE took part in celebrations too. Pakistan’s fascination with Dubai, is not uncommon, or hard to understand.

Dubai has always been positioned to be Middle East’s answer to the West’s glitz and glamour –skyscrapers galore, an economy that is home to global brands, and jobs that apparently promise a life from rags to riches – all in the pseudo comfort of supposedly Islamic settings. To the religious-minded, it offers Shariah Law and the comfort of being next door to Saudi Arabia, the self-proclaimed centre of Islam. To the non-religious minded, it offers pubs, nightclubs and beaches. Travelling to Dubai is not a hassle either, unlike Europe and North America. Depending on where in Pakistan you fly from, you are in Dubai within a couple of hours. For Pakistanis who wish to live and work abroad, Dubai offers the perfect solution.

According to data collected last year, almost 12 per cent of all expatriates in Dubai, Sharjah and Ajman are Pakistanis, second only to Indians who make up 25 per cent. This is the highest percentage of Pakistanis residing in a foreign country, pointing an obvious finger at the choice of most people when it comes to moving abroad. While most Pakistanis (a small percentage of the total) living in the Dubai are quick to sing praises of what the country has to offer, there is a stunning lack of concrete criticism towards Dubai’s dark side.

The number of Pakistanis or total expatriates for that matter, who have well to do blue collar jobs, is miniscule. Most expatriates come to Dubai as low-wage labourers, with dreams of a better life, only to live in conditions that would shame the worst of human right violators.

What transpires in Dubai only has one perfect definition – slavery.

While Sheikh Mohammed bin Rashid al Maktoum’s image beams down on people across the city, the fact remains that his absolute rule has developed three types of residents in Dubai – the well-to-do expats, the local Emiratis, and the pre-dominantly South Asian, underpaid, and monstrously-abused  foreign labourers that built the city with their toil, sweat and quite literally, blood. They are visible everywhere but the rest of the population has been programmed into either looking away or not paying attention to them.

Sonapur, which means ‘land of gold’ in Urdu/Hindi, hosts a large number of these expatriates. Every evening, men who build Capitalism’s poster child are shifted from their work cages to their residential cages. Until recently, this daily journey was undertaken on cattle trucks but since this was hurting the Emirate’s visual appeal, Dubai decided to take things to an even uglier level, using small metal buses to transport the labourers, where they sweat and suffocate in inhumane conditions.

While what is described above is only a drop in the vast ocean of human right violations in Dubai (much like the rest of Middle East), there has been virtually no stone left unturned that highlights these issues. Not surprisingly, the annual Freedom House report on Freedom in the World has listed the United Arab Emirates as ‘Not Free’ every year since 1999. Dubai itself has been described as housing ‘less than humane’ conditions for foreign labourers that reside there according to Human Rights Watch.

While the horrors of low-wage employment are obvious, the madness does not end here. The UAE has one of the most repressive political systems in the world, identical to its other Middle Eastern neighbours that hold the banner of Islam loud and proud. This political repressiveness trickles down to Dubai too, with flogging and stoning being common punishments for stepping out of line.

Even though the UAE came out of the Arab Spring apparently unscratched, a large number of activists in areas, including Dubai, were jailed, tortured, or ended up being the victims of forced disappearances.

With the UAE and particularly Dubai’s unforgiving way of life known to everyone, it would be good to see Pakistanis living there speaking out about the more dominant, dark side that impacts the majority, instead of highlighting the mild sunshine that is only restricted to a small minority.

Dubai is not the heaven it is made out to be. It is the global centre of slavery where human life is expendable, and labour is abused, used and then some more. This is the Dubai that needs to be highlighted.