Is a discussion on climate change even relevant to a third world country like Pakistan? 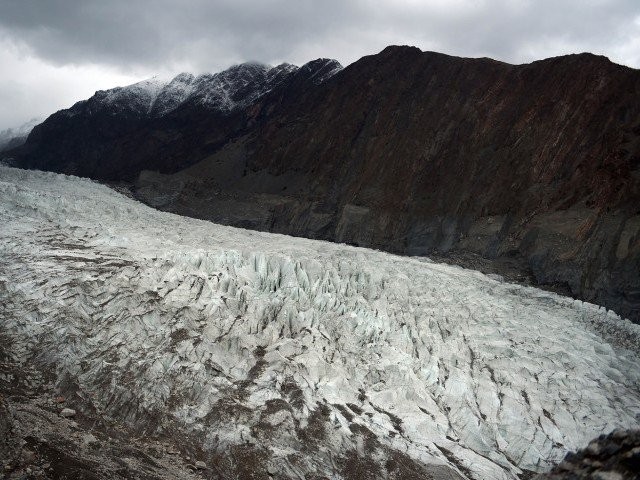 In this photograph taken on September 28, 2015, a general view of Passu glacier is seen in Pakistan's Gojal Valley. PHOTO: AFP

Over the last century, the average temperature of the earth increased by 0.6 degrees and experts estimated that it will increase by 1.4 to 5.8 degrees centigrade by the end of the current century.

What does it mean? How does that have any effect on a person’s daily life?

For a third world country that is struggling with power outages and recurring political crises, is this even a relevant discussion?

The answer is yes.

And it impacts all of us.

The geographical location of Pakistan places it in a heat surplus zone, which makes it extremely susceptible to the impact of climate change. The occurrence of rising temperatures in Pakistan is expected to be higher than the global average. The northern areas of the country host more than 5000 glaciers while the south is composed of hyper deserts. Its land area is mostly arid and semi-arid which means that about 60 per cent of the area receives less than 250 millimetres rainfall annually and 24 per cent receives 250-500 millimetres. Pakistan’s rivers are predominantly fed by the Hindu Kush Karakoram-Himalayan glaciers which are reported to be receding quickly due to global warming.

There is a dire need to understand climate change, recognise its relevance and move towards action. Pakistan has been devastatingly affected by natural disasters including drought, floods and cyclones and is ranked among the top 10 countries most affected by climate change.

The persistent drought conditions in districts such as Tharparkar and the sudden heat wave in Karachi this summer which claimed the lives of more than thousand people only corroborate the claims of destructive impacts of climate change on Pakistan. The financial strain of these impacts is also staggering. It is estimated that in the previous two decades, the country has suffered average losses of $2 billion per year on account of extreme weather events linked to climate change.

I believe that things will only get worse, unless a comprehensive and all inclusive policy is adapted to deal with climate change. In Pakistan, as on a global scale, water, food and energy create a nexus of interdependence whose balance is thrown off by a globally changing climate. A significant portion of the country’s population lives in the low coastal areas or river deltas, where climate change can cause sea levels to rise and even lead to floods. Increasing frequency and intensity of extreme hydrological events makes the Indus Delta a high risk zone for sustainable crop production. There is evidence which suggests that Pakistan is crossing the line between water stressed and water scarce.

I don’t want to paint an absolutely bleak picture of the future. There are a lot of things that we can do to mitigate and adapt, as this is one of the most important areas which demand global attention. Pakistan’s contribution to global carbon emissions is 0.8% yet in 2013, it was ranked amongst the top three countries affected by climate change. The country has limited capacity, resource scarcity, and inadequate physical and institutional infrastructure to cope with and timely respond to the climatic disasters.

Pakistan, let’s hope, has used the platform of COP 21 to make a case to the international community and work towards global collaboration.

On a local level, we need to initiate national level capacity building programs to encourage demand oriented conservation technologies. Around 60 per cent of the population in Pakistan is under the age of 25 which serves as a huge window of opportunity. These youngsters are going to control the reins of the future and any effort to build their capacity is an investment in the future. A well informed and environmentally conscious populace can act as an antidote to a laid back government.

I recently served as the youth adviser for the United Nation Pakistani Youth for Climate Change Project which aimed to further this very cause. An educational forum was organised which brought together environmental experts and youth from various educational institutes in Islamabad. The goal was to sensitise the youth to the environmental problems with the help of interactive dialogues and exercises. The power of an enlightened and active youth is undeniable and I believe that such initiatives strengthen these voices.

All of us have the capacity and faculty to do something and a make a positive contribution towards solving the pertinent issue of climate change. It’s time we came out of our veil of ignorance and accepted our responsibility.

The author has majored in Public Administration and Governance from National University of Science and Technology (NUST). She is currently working as a Research Adviser to the Foreign Affairs Committee of Pakistan. She tweets as @ShaheeraSyed (twitter.com/ShaheeraSyed)

Does your child deserve a lower grade because he is an introvert?

Stop texting me, I forgive you all!