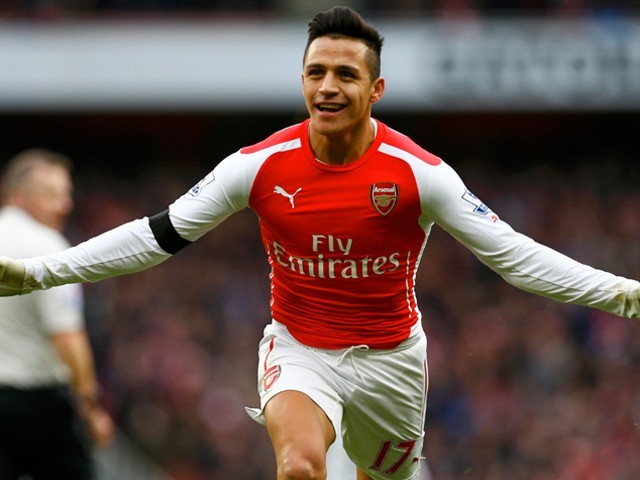 Chilean superstar Alexis Sanchez has been in magnificent form for Arsenal this season. Ever since he joined them from Barcelona last season for a fee of £33 million, Sanchez has been the Gunners’ best player so far, scoring seven goals and providing four assists. Last season, he missed winning the Professional Footballers’ Association (PFA) Player of the Year award by a close margin to Eden Hazard.

Similarly, his extraordinary pace, power, and creativity has helped him destroy his opponents. His overall form has transformed him into a force to be reckoned with, and it is this very form that has appealed to Manchester United. Considering the fact that United now lacks a strike force and pace after the departure of Angel Di Maria to Paris Saint-Germain (PSG), and Wayne Rooney not being the player he once was, Sanchez just might be the Golden Goose the Red Devils need.

With youngsters like Anthony Martial, Jesse Lingard, Memphis Depay, Andreas Pereira, Adnan Januzaj still developing their form, Sanchez would be the ideal choice for offence as United hasn’t scored many goals this season.

However, it remains doubtful if Arsene Wenger will sell one of his prized assets to their main rivals, especially considering the possibility of history repeating itself – the Gunners sold their then best player, Robin Van Persie to Manchester United in 2012, who helped the Red Devils win their 20th title.

But now things have changed for the Gunners. They don’t have any debts left to pay for their new stadium and have plenty of cash in their kitty to buy new players.

Furthermore, Wenger also acknowledges the importance of investing in Sanchez and had offered him a five-year contract worth £150,000 per week – a deal which would keep him at the Emirates till 2020 as they compete for the English Premier League (EPL) this season. Thus, it looks highly unlikely that Sanchez could leave Arsenal.

On the other hand, after another goalless draw in a crucial UEFA Champions League match against PSV Eindhoven on November 26th, it is evident that United needs a striker to score goals as they haven’t scored a single goal throughout the month of October in the EPL.

Therefore, United could sign a young striker in the January market and the options available to them could be Leister City’s Jamie Vardy, Everton’s Romelu Lukaku or Juventus’s Alvaro Morata.

Along the same lines, Louis Van Gaal has shown huge interest in signing Cristiano Ronaldo back from Real Madrid. Even speculations persist that the 30-year-old is set to leave Madrid. Van Gaal stated,

“We are looking at all players, not just Ronaldo but these players are mostly ungettable.”

“With Ronaldo, let’s wait and hope. There is no trainer in the world that doesn’t like him.”

If United are to mount serious competition for the EPL this season, they need to sign a new striker. Whether that’s in the form of Ronaldo or Sanchez, we’ll have to wait and see.