Five lessons that cycling in Pakistan is teaching me about life 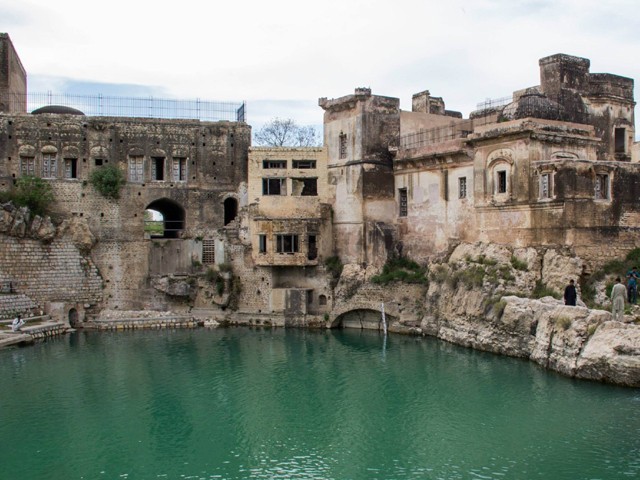 While the temples were absolutely breath-taking, I eventually realised that there was so much beauty along the way too. PHOTO: BENJE WILLIAMS

After visiting a friend in Bombay who cycles nearly every morning (at 4:30am), I decided I wanted to try something similar in Pakistan. Although I haven’t managed the 4:30am part yet, I have been learning some interesting lessons from cycling, particularly on a Thanksgiving ride to the breath-taking Katas Raj Temples.

When I was initially thinking about riding to Katas Raj, I was pretty worried that I might be too tired for the 60 kilometres ride. After thinking about it for an embarrassing amount of time, I finally overcame this indecisiveness. And literally before I even knew it, the ride was over.

It made me think that often times, in this journey of life, we ultimately don’t pursue an idea/goal because we think it’s too big or too unrealistic or will require too much work. But if/when we actually decide to do that thing, it’s really not as difficult or as unattainable as we thought. The hardest part, we often discover, was just making up our mind, overcoming our own doubts, and just deciding to decide.

On a lighter side, I love measuring distance and speed in kilometres: it makes me feel like I’ve actually gone farther and faster (60 kilometres sounds way cooler than 37 miles) Which is funny, but also an important idea: that progress is relative. And often times we feel like we’re not making enough progress, but perhaps we’re just measuring it in the wrong way. What if we looked at it from a different perspective? Maybe we’ll realise we’ve actually gone further (or faster) than we thought.

3. The struggle enhances the pain

On the way back from the temples, an interesting thing started happening: all the insignificant challenges that I initially faced in the first half started feeling much heavier and more difficult to manage after riding for so long. For example, the smallest incline in the road seemed like I was suddenly climbing K2. The slightest headwind felt like a Sindhi sand storm.

It struck me that this might be similar to people who are deep in the struggle of life, where a seemingly small challenge can feel like the world is tumbling down. What might seem manageable/not a big deal to someone who is doing better off — cruising along with a fresh start — could in fact be a major setback for someone who has been worn down from the journey.

How we treat/judge/think about others — particularly people whose struggle we don’t know about (which is just about everyone) — is extremely delicate.

4. The struggle also enhances the joy (and a little help goes a long way)

At the same time, I realised that when the struggle was the realest, the smallest joys made the hugest difference.

For example, there was a motorbike mechanic who I stumbled across only minutes after realising that I had lost two bolts on my chain ring and that my chain would either keep falling off or the ring would be permanently damaged.

In broken Urdu, I hesitatingly interrupted him from what seemed like his morning shaving ritual (with a hand mirror and a classy-looking wooden straight razor), and within minutes it felt like he had miraculously given both me and my bike a second chance at the journey remaining.

There was also a rickshaw driver who saw me struggling up this four-five kilometres incline, and invited me to grab on to his rickshaw/qingqi in what seemed at the moment to be nothing but an act of God.

And the crazy thing is that I think the cost was incredibly small for the mechanic and rickshaw wala (e.g., the mechanic actually refused my payment three or four times). Both experiences left me wondering if either guy knew how much they had actually helped or encouraged me and also how many opportunities each of us might have during the day to make these small miracles happen for others.

5. Slow down and (re)discover the beauty

While the temples were absolutely breath-taking, I eventually realised that there was so much beauty along the way too.

One of the great things about biking, compared to driving, is that it slows us down enough to realise the beauty we’ve maybe missed before. But at the same time, I also realised that I had to keep reminding myself to look around and enjoy the beauty, rather than just staring down at what pothole to avoid next.

This idea is simple but perhaps somewhat profound: that in order to learn (and enjoy) the most in life, perhaps we have to practice how to discover — not just see — the beauty along the path (and not just at the finish line).

The hyperlinks in this post were added by the Express Tribune blogs desk.

The author is the CEO/Cofounder of Amal Academy, a Lahore-based education venture started out of Stanford University. He blogs at medium.com/@benjewilliams and tweets as @benjewilliams (twitter.com/benjewilliams)

Wake up America, Islam is not the enemy