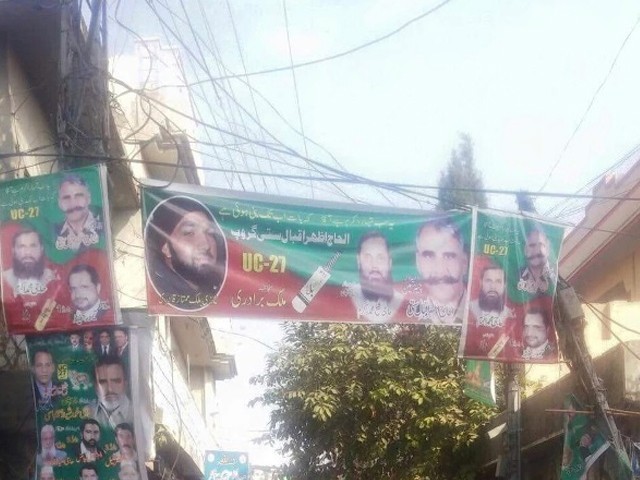 Mumtaz Qadri is a convicted killer – a man who shot his own boss in cold blood, then Punjab Governor Salman Taseer, for taking a stand in favour of minorities being unfairly prosecuted under a draconian and archaic law.

Since his heinous crime, Qadri has become a beacon for the insane in this country; a symbol to which extremists flock like birds flying south for the winter, or like suicidal moths burning themselves on tube lights.

Never mind the fact that Qadri threatened to take his own life (which honestly, is like threatening to gift someone a Ferrari); a clear violation of Islam’s anti-suicide rule.

This man now graces banners of both Pakistan Tehreek-e-Insaf (PTI) and their partners Jamaat-e-Islami (JI), in order to satisfy extremists in the voter base.

The only way this image would have been acceptable is if the PTI bat was striking Qadri on the face.

The reaction from activist Jibran Nasir was understandably swift:

On the other hand, the response from PTI’s chief of staff was… confusing:

Wait, what does that even mean? You can dissociate yourself from the posters, but what about your candidates? This would be like me crashing my car in a horrible accident, running away, and then saying,

“I would like to dissociate completely from a certain vehicle registered under my name, involved in a crash, where casualties may have occurred.”

And what about PTI’s brothers on the election trail, JI?

Recently, PTI head honcho, Imran Khan, wrote an official letter to the Bangladeshi prime minister, requesting her to halt the execution of members of Jamaat-e-Islami convicted of war crimes.

“If his execution is stopped, it will be in the larger interest not only of our region, but for the establishment of world peace and justice.”

Tonight's Exposed on DawnNews we will uncover the truth behind PTI's claims of 'good governance' in Khyber… https://t.co/d4qGOra5Hi

This is the same JI that sought a presidential pardon, yes complete forgiveness, for Mumtaz Qadri in 2011:

“[JI] urges the President to announce amnesty for Qadri like many other cases especially under the NRO,” said a resolution adopted by JI Shura. “Government should withdraw the case against him for murdering Taseer in the public interest.”

It wasn’t just a silly case of misjudgment years ago from PTI’s buddies. As The Express Tribune reports, they use the murderer like a cheerleader:

“The poster, put up by the Jamaat-e-Islami candidates for UC-34 of Baldia in District West, bears the slogan ‘Aao Badlen Karachi’. It has the names and pictures of JI and Pakistan Tehreek-e-Insaf candidates contesting in UC-34 of Turk Colony.

What has made this particular poster controversial, however, are the four pictures on the top right corner. They are mug shots of Mumtaz Qadri, Ghazi Ilm Din and Umar Cheema. The man in the fourth picture could not be identified, even by the JI’s own leaders.

“All these people are conquerors (Ghazi) of good over bad and have given their lives for the love of religion,” reasoned the JI spokesperson. “There is nothing wrong with these pictures and they have only been printed to motivate our voters,” he added.

PTI can pretend to look the other way, but we all know this tactic is straight out of Imran’s playbook. Not only did the cricketer turned politician for years plead in favour of the Taliban, stooping so low as to appeal for a Taliban embassy immediately after a horrific attack on a church, and in effect creating a narrative that the Taliban were only killing Pakistani civilians in retaliation to military strikes, when as the timeline proves, it was the other way around, but he had no qualms about parading the picture of Taliban sympathiser, Dr Aafia Siddiqui around, in order to attract votes.

As The News reported, even Dr Afia’s husband confessed that his ex-wife, who allegedly remarried the nephew of a 9/11 mastermind, was dangerous,

“I was aware of Aafia’s violent personality and extremist views and suspected her involvement in Jihadi activities.”

Why was Imran so concerned with an American citizen who had put the safety of her own children on the line to visit the group in Afghanistan? Why had Imran carried banners of Aafia across the streets, feeding hatred against the West, and building sympathy for Aafia’s associates?

The answer, of course, is votes.

A few years ago, Imran was standing up against General Pervez Musharraf with Nawaz Sharif, but today, he calls the dictator a far better choice than the democratically elected leader.

Having opposed both, I can vouch that Musharraf's mly dictatorship was less oppressive than Nawaz's dictatorship in the garb of democracy.

Pakistanis on twitter were quick to refresh Kaptaan’s memory:

In a nutshell, PTI is willing to create compassion for a dictator, a convicted murderer, convicted war criminals, a fellow party which supports religious extremists, a woman accused of terrorism, and an entire terrorist organisation (immediately after it bombs a place of worship for minorities, no less), in order to gain support.

Interestingly enough, Imran’s readiness to partner with anyone comes back to haunt him with regularity. Recently, TV presenter Aamir Liaquat mocked the PTI chairman after the end of his second marriage.

Naeemul Haque was sharp in his criticism:

Wait… If Aamir Liaquat is such a nasty person, why did Imran show up on his show a couple of years ago?

Didn’t PTI know Aamir Liaquat was as unsavoury a character then, as he is now? Of course they did. We all knew. But PTI’s moral compass only seems to function when their neck is on the line. Otherwise, they are like Mick Foley in a no-holds-barred cage match, where anything goes.

I, too, voted for PTI because I bought into Imran’s sales pitch. Like so many ex-PTI fans, I am regretting it now.

Recently, when Imaan Hazir, the daughter of PTI spokesperson Shireen Mazari, tweeted about the abuse she had faced from PTI voters, ironically enough, PTI voters tried to prove that they were not abusive by being abusive.

PTI's abuse saved me a very embarassing life. I left at the right time. Cant imagine defending these people and their leader… *shudders*

Here, a PTI fan calls her a ‘pari likhi jahil’ (educated illiterate), for sharing her views. Things only took a turn for the worse when Imaan claimed to have voted for PML-N instead.

And yes, PTI workers do inconvenience citizens like the political parties they claim to be different from.

Clearly, a growing number of PTI voters are becoming disillusioned by the party’s antics by the day.

PTI gained popularity after it took a vow to fight the corrupt status quo as an ethical group of politicians. Unfortunately, they are proving to be the same sort of jesters, just in different colours.