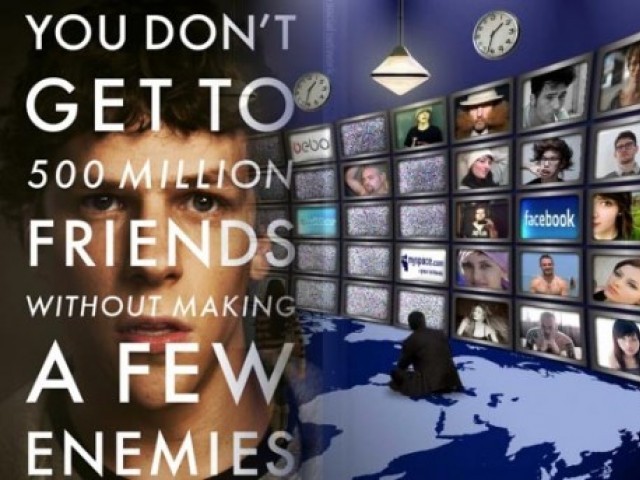 Recently, I had the good fortune of being able to catch the latest cinematic venture by American filmmaker David Fincher. He is the genius mind behind films such as Seven, Fight Club, the Zodiac and the multi Oscar nominated film The Curious Case of Benjamin Button for which he even received an Oscar nomination.

His latest venture, “The Social Network” brings to the silver screen the story of Mark Zuckerburg and the founding of Facebook, a social networking website which in a matter of years would forever change the world that we live in.

The film tells begins from the sites humble beginnings from a Harvard dorm room and follows it to a website which has over 500 million members today. Zuckerburg’s success with Facebook has earned him the title of being the youngest billionaire today with an estimated net worth of 6 billion American dollars. (Spoiler alert)

The film revolves around two law suits that were filed against Mark Zuckerburg by individuals he knew from his time at Harvard, including his former Harvard room mate Eduardo Saverin. The film is the story of friendship, deceit and the entrepreneurial spirit that can transform a small idea into something remarkable.

Zuckerburg’s character is played by Jessie Eisenberg (Zombieland and Adventureland) who has managed to do a great job in the role and has displayed maturity by bringing a real life character on the big screen. Apart from this, due to his slight similarity in appearence to Zuckerburg, I could not think of another actor who could play the founder of Facebook on the big screen.

What happens on screen

The film begins in a Boston bar, where we see Mark with his then-girlfriend Erica Albright in the middle of a heated conservation which prompts the two to break up. Following this Mark jets back to his dorm and proceeds to blog about Erica in a not so good way. Along the way, we are also introduced to Eduardo Saverin, Zuckerburg’s best friend at Harvard, who will eventually become the co founder of the social networking site that changed the world.

This is when Mark’s first web venture, Facemash,  which allowed guys on campus to comment on the attractiveness of girls presented before them was born. The overnight popularity of Facemash proves to be so substantial that it causes the Harvard server to crash landing Mark on probation. But Facemash’s short-lived success/infamy has inspired Harvard undergraduates the Winklevoss twins and their friend Divya Narendera to approach Mark about an exclusive social networking project titled ‘Harvard Connection’.

Soon after Mark thinks of an exclusive networking site that captures the college experience – Facebook – suggests the idea to Saverin and convinces him to finance the project. After ‘theFacebook’ (the initial version had a ‘the’)  begins operations on the Harvard campus and  it soon begins expanding to other colleges  across the United States and later the world.

We see in the film, that this rapid expansion causes a great deal of resentment amongst Narendra and the Winklevoss’s who believe that Zuckerburg stole their idea which is now reaching phenomenal growth. Facebook’s growth and expansion also manages to attract the attention of Sean Parker, the founder of Napster who in the film is played by Justin Timberlake. During the first meeting between Mark, Eduardo and Sean, Eduardo feels sceptical and is reluctant to have him on board but none the less agrees to be part of the venture with the former Napster-brain on board.

Growth and expansion soon become a source of friction between Mark and Eduardo, and over the course of time Eduardo finds himself deprived of his stake in the venture, when his ownership is overnight drowned from a sizeable 34 per cent to an insignificant 0.03 per cent, while the ownership stake of other partners including Sean Parker remains unchanged. He files charges against Mark.

The film ends with Mark’s lawyer advising him to do the best thing and compensate those who feel cheated. In the last scene Mark sits in a conference room by himself where his trial proceeded logged onto Facebook, adding his former girlfriend Erica as a Facebook friend.  He refreshes the page repeatedly awaiting her response.

The film may is a fictionalized version of real life events and there are different interpretations of what actually happened. Fincher’s film has done a good job of telling the story of the world’s youngest billionaire and the website that is a part of almost all of our lives.