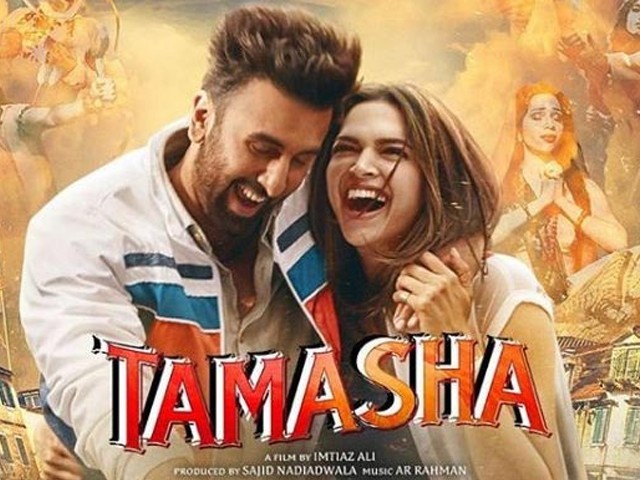 Only go to watch it if you’re prepared to think about what the story tries to makes you think. PHOTO: TAMASHA FACEBOOK PAGE

Watching the promo of Tamasha, I felt more than a little disappointed. Although I love Ranbir Kapoor and Deepika Padukone, the promo was a little too much like Yeh Jawani Hai Dewaani or any other Bollywood chick flick. After a mind-boggling and goose bump-triggering film like Highway, a chick flick is not what I would expect from Imtiaz Ali, hence the disappointment.

As a self-proclaimed writer myself, I have always looked up to Imtiaz Ali for his ability to write a simple story and turn it into something phenomenal on screen. Highway, I felt, was his magnum opus. So I decided not to judge Tamasha by its preview and give the movie a shot.

Tamasha means show, I assumed the film would be about theatre, as the name itself suggested and the trailer showed glimpses of the actors on stage. After watching the film, it would be safe to say that Tamasha is indeed about a show, just not the kind of shows performed on a stage but in fact the shows we perform in our everyday lives.

The story is about Ved (Ranbir Kapoor), a small boy fascinated by the fictional world where imagination has no boundaries or borders and where one can think of whatever one wants. He lives in his little world of stories, the characters in these stories seem real to him, more alive than the actual people around. When listening to or telling a story, he is oblivious to the mundane, real world where his inability to understand math and lack of focus on academics is a concern for his family.

But, like many children, Ved’s fantasy world and imagination are put to an end by his family, customs and societal norms. A young man cannot be running around listening to and telling stories, he must study, become a doctor or an engineer and be a part of the race we are all eventually pushed into running. So Ved does what he is told, buries his passion for storytelling and becomes a robot. His life becomes mechanical, waking up, going to work, back to bed, repeat.

It is when he takes a one-week trip to Corsica that Ved becomes his old self again. There he meets Tara (Deepika Padukone) and together they spend their week lying to each other, making up stories and playing characters. Tara falls for Ved for she sees him as a larger than life kind of person, who is witty, charming, talks to mountains and tells the most wonderful tales.

However, once back in India, when Tara meets Ved (who is back to being the robot he was forced to become), she can barely believe he is the same person. They grow apart and that is when Ved begins to realise that what he has become and what he really should have been are two different people.

Simply put, Tamasha is about passion versus duty. It is about who we are told to become versus who we really are. Life is a show, we are all playing different roles at different times, many a times these roles do not do justice to who we really are but we still put on a good face and carry on the act because the Tamasha must go on.

Imtiaz Ali brilliantly shows us flashes of Ved’s personality through contrasting scenes from his everyday work life, how he was in Corsica and how he was as a little kid in a world of stories.

From a dynamic and charming stud, to an average, engineer who trembles in hesitancy and intimidation, Kapoor could not have acted more brilliantly. He is perfect in each scene, especially when he talks to himself through the mirror. On one side of the mirror, he is his shaky, robotic self and on the other side, he is the passionate storyteller he was supposed to be. You can see his passion coming out when he sees himself in a mirror.

Padukone is good in the role that she has but I feel her acting potential remained untapped. Ali could have used her potential more than he did and that was a little disappointing.

However, Ali likes the audience to really focus on one character so much so that you feel like you actually know them. Like Ved in Tamasha, Veera in Highway or Jordan in Rockstar.

The songs of the movie have many different flavours. The fast tracks are fun and upbeat. The slower ones, however, grab the essence of the story. My favourites are Tu Koi Aur Hai sung by the powerhouse AR Rehman. The lyrics of this song capture the message of putting on masks and pretending to be somebody else.

Also, Safarnama is a beautiful track that plays in the background as Ved begins the journey to finding himself. It is sung by the soulful Lucky Ali, who lent his voice to a movie after a very long time.

As I was gripped to my seat till the very end, thinking about all the things Ali threw at us, forcing us to think, I could see rows and rows of the audience in the theatre confused or bored. I could hear people whispering to each other,

(Why didn’t Deepika marry him?)

When people started leaving the hall before the movie ended, I realised it was probably because we, as movie-goers, only want to see dance numbers, songs, romance and the masala that Bollywood promises. If that is what you’re looking for, don’t go to watch Tamasha. Only go watch it if you’re prepared to think about what the story tries to makes you think.

I would give Tamasha a seven on 10 and hope writers like Imtiaz Ali continue to fascinate us with extraordinary tales of ordinary people.