There can be no “war on terror” without “war on drugs” 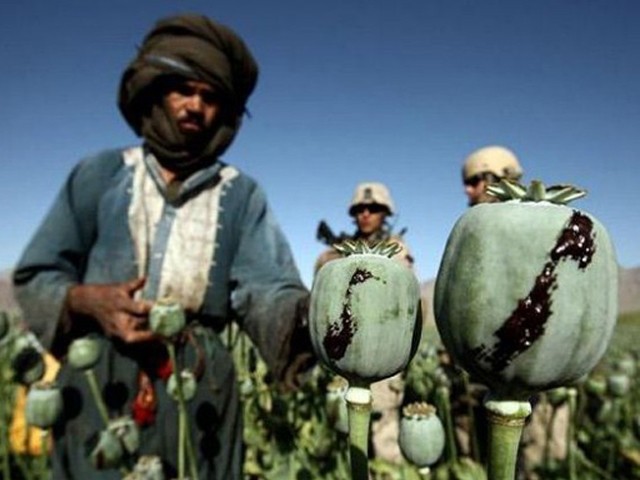 An Afghan man harvests opium in a poppy field in a village in Golestan district of Farah province, May 5, 2009. PHOTO: REUTERS

Few have witnessed the senseless barbarity of ISIS without rhetorically asking what these brutes have been smoking recently. As it happens, this question is not only pertinent, but strategically impossible to ignore.

Captagon, although swallowed and not smoked, is a powerful amphetamine that’s historically landed Saudi Princes into massive scandals. The illicit drug is popular in the Middle East as it’s relatively cheap and easy to manufacture, and serves as an effective stimulant for, say, a militant who has to stay up all night looking out for incoming Russian fighter planes.

Turkish authorities have recently seized nearly 11 million Captagon pills near the Syrian border. The similar haul was intercepted last year by Lebanese forces – 12 million pills on their way from Syria to the Lebanese ports, from where they were intended to be distributed around the Gulf. Saudi Arabia alone seizes about 55 million of these a year.

It has long been understood that wars and drugs go hand in hand. For every war you recall, one can Google the staple drug that went with it. The American civil war produced 400,000 morphine-addicted soldiers, since morphine was liberally used back then as an anaesthetic. The civil war in Sierra Leone gave rise to armies of child soldiers high on ‘brown-brown’, a mixture of cocaine and gunpowder.

Some wars were nearly exclusively about the drugs for which they are now known, namely the Opium Wars between the Chinese and British. Speaking of the latter, it ought to be noted that drugs have not only fuelled wars, but colonialism as well. Until the 1920s, the British traded heavily in opium, not just spices, cultivated in India.

Lebanon’s Bekaa valley has long been known as a centre of production of illicit drugs distributed through the region. But since 2011, the production has been overtaken by Syria, particularly by the radical Islamist groups operating in the region. The profits are used to purchase arms.

Analysts have long understood that drugs fuel wars around the world, but the inverse can be just as true. Wars create a market for illicit drugs that can be used to either enhance combat capabilities, or calm the nerves of militants and soldiers suffering from the effects of war. For any terrorist organisation to be able to endure and prosper, there are far more skills involved than knowing how to make a bomb; one needs to know how to cultivate illicit crops, manufacture drugs, and manage their export and distribution.

Many of the drugs smoked, snorted or injected in urban streets, can be traced back to not just to the drug mafia, but terrorist organisations like the Taliban. It is well known how the Taliban have profited from heroin production and sales, with Afghanistan being responsible for roughly 90 per cent of all opium production (which is chemically processed to produce heroin) around the world.

The result is a vicious cycle of wars generating drugs, drugs creating social and political turmoil, and turmoil fuelling the conflicts.

In this sense, it is difficult to ignore the futility of the ironically named “war” on drugs, under which drug use hasn’t dwindled as much as it’s simply been redistributed across different regions.

It’s worth pointing out here that a useful strategy agreed upon by notable economic, security, and even psychiatric experts, is to de-criminalise common ‘soft drugs’ like marijuana (and more recently in Pakistan, shisha) that have limited addiction-potential and fewer adverse effects. The idea is both to unburden the law enforcement system so it has more resources to tackle drugs like Captagon and heroin, while being able to directly tax and regulate the soft drugs, and cut dangerous cartels out of the equation.

Most drugs are fairly simple to produce. The trick is to control the market, by stabilising the political and social dynamics of a region.

But political upheaval and social decay follow the wake of every battalion. It’s in the dust cloud left behind a militant’s boots, that we find a bustling market for either numbing people’s pain, or granting them a boost of raw energy needed to fight.

With such vicious synergy, it is impossible for us to talk of drug control, without war control being on the table as well.