The case of stolen side mirrors and stereo systems 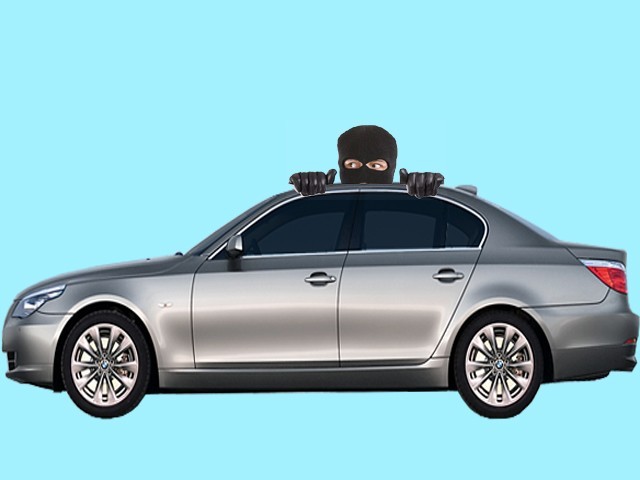 One should be mindful that these criminals operate in pairs and one of them is mostly carrying a firearm. It is advised not to get into any kind of confrontation with them upon encounter. A safer option is to raise alarm.

Fahad Ahmed, a banker by profession, was provided a company-maintained car by his employer. After having upgraded from a two-wheeler and now commuting in luxury, this brand new 1300cc vehicle was the car of his dreams. Little did he know that soon he would be coming under tremendous stress, just in order to keep this car safe from various criminals, roaming the streets of Karachi.

It was a Sunday and Fahad had gone to his in-laws for dinner with his wife and two kids. After attending to the social call and exchanging farewell, the family returned to their brand new car only to discover that the side mirrors were missing. Soon they realised that someone had actually broken the entire frame along with the mirrors and the only part left were the wires hanging out from the sockets. That very moment, all their dreams were shattered and the trip back home was a torture.

Aliya Mir works at a multinational company and drives to and back from work in her 1800cc vehicle on a daily basis. Having her side mirrors stolen was a routine affair for her, but one fine day when she stepped out of her office and reached her car, she realised that the driver’s side window was smashed and her in-car entertainment system along with the air conditioning vents and knobs were missing. She had to drive back home without any air conditioning and an empty space where she once had her expensive entertainment system installed.

Although the car was insured and she would get the stolen items compensated for, but it was the mental agony and the fact that someone actually broke into her car and stole something that belonged to her that bothered her.

Such instances are now a routine activity for Karachiites. Be it outside a mosque, a mall, grocery store, marriage halls and banquets, bank or even your own houses, no place is safe and these robbers strike with impunity. A little research on this rapidly growing crime has revealed the following facts:

These are not your regular muggers or street criminals. These are instead a group of highly skilled technicians, who have connections with vendors operating in the automobile parts and accessories markets in Saddar, Sher Shah etc.

They have the required skills to disarm a vehicle’s security system, dismantle different types of frames and compartments (be it an old one or a brand new model), in a matter of few seconds and get away with the loot.

These criminals work in pairs. They ride pillion on a motorbike and as soon as they spot an unattended car in a secluded neighbourhood, one of them – the tech guy – moves towards the targeted vehicle while the other one is on a lookout duty to keep an eye out on any law enforcers, owner of the car or the general public.

The tech guy circles around the car to make sure that no one is watching and then assesses the security system of the vehicle. Experienced ones enter the car by breaking the rear quarter vent and make it to the front portion.

The entire dismantling and escaping the crime scene takes hardly 20 seconds. Most of these criminals use proper tools and will leave your car unscratched, taking just the stereo system/ entertainment system only or most of the time, the entire air conditioning panel.

Side mirrors are easier to steal. All that is required is a small screwdriver and a little bit of expertise. Some of them are quite ruthless and do not hesitate in chipping off the entire frame, which again takes just a few seconds.

What kinds of cars get targeted?

These criminals target different models of Honda Civic, Toyota Corolla, Honda City and from the imported category of vehicles, their target vehicles include Toyota Premio, Allion, Belta, Vitz and even Toyota Fortuner. The latest models come with panels that can very easily be dismantled without even using many tools, which makes it more convenient for thieves to get their job done in a matter of a few seconds.

What should the general public do?

Those who can afford should drive in the company of domestic help or be driven by a chauffeur. It would be safer if the car needs to be parked in open or at an unguarded location. Installing one of those security systems with sensors and remote-controlled vibration alert systems can be of some help.

Smash-proof films can be installed on the car windows that can stand blows and attempts of break-ins. Vendors of such films are located in Badar Commercial, Zamzama and Khadda Market.

One should be mindful that these criminals operate in pairs and one of them is mostly carrying a firearm. It is advised not to get into any kind of confrontation with them upon encounter. A safer option would be to raise alarm.

What can the police do?

All stolen parts are sold at Sher Shah and Saddar. If the police want to curb this menace, all they have to do is set up surveillance around and inside the markets dealing with used and stolen vehicle parts and catch the criminals on the spot.

Why they haven’t done so yet is, well, not hard to imagine.