You think ISIS is the deadliest terrorist organisation in the world? Well, it’s not. 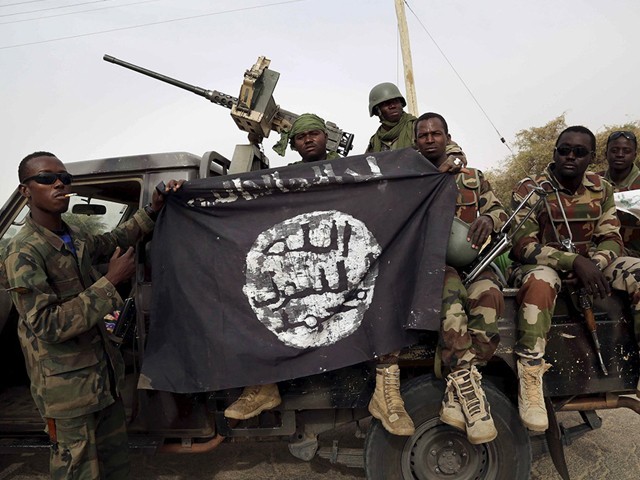 Soldiers from Niger hold up a Boko Haram flag that they seized in the town of Damasak, Nigeria. PHOTO: REUTERS

So you thought ISIS was the deadliest terrorist organisation in the world? Well, it’s not. The deadliest is Boko Haram.

The outfit overtook ISIS in 2014 in terms of the number of innocent people killed. To make matters worse, the group has already pledged allegiance to ISIS making it a deadly and potent outsourced partner in Africa. While global media is abuzz with the ISIS catastrophe, Boko Haram – a Nigerian terrorist organisation – is laying strong foundations in North and West Africa. The outfit, based in Nigeria, is also active in Cameroon, Niger and Chad. It also carries attacks in other African countries.

In January this year, the group destroyed an entire village, killing, burning and slaughtering people without remorse. The death toll had risen to about 2,000 people, yet if you ask anyone around you they will not even have heard about the incident.

The group – whose name literally means “western education is a sin” – is against anything related to western society. Since its establishment in 2002 and rise in 2009, Boko Haram has claimed more than 20,000 lives and forced close to two million people to flee their homes.

The numbers are staggering, and yet it has merited no international scale media uproar.

Boko Haram’s recruitment pattern somewhat resembles Pakistan’s militant recruitment model. Muhammad Yusuf, the group’s founder, set up an Islamic centre and religious seminary back in 2002, attracting children from poor families in Nigeria based on the promise of free religious education. With a plan in sight, the same complex later became an active recruitment ground for jihadists in the country.

Already well-known in the African continent, the group gained global recognition after its mass abduction of 276 schoolgirls in Chibok, Nigeria. The abduction gained attention from all corners of the world, including the US president, the first lady and Malala Yousafzai.

The entire world called for the immediate release of the girls, leading to the famous hashtag #bringbackourgirls.

"Citizens across nations don't want leaders who sit in the comfort of leadership & postpone actions." @obyezeks at #WITW. #BringBackOurGirls

Just like ISIS, the group seeks to overthrow the Nigerian government and establish an Islamic state in the country. Yet, the media and the west have conveniently turned a blind eye towards all of it.

Because it’s geographic positioning in the world does not have the required level of ‘strategic’ importance to cause furore.

The fact is, Africa as a whole has been largely ignored in the global narrative.

In fact, when Americans were asked to label Africa on a map, this was the result:

The US state department, after a recent suicide bombing, issued a nominal statement vowing to “work with” Nigeria to help defeat Boko Haram. But no real efforts have been made.

The world leaders are more concerned with terrorism in areas that are in line with their personal strategic interests.

Consequently, nobody really cares about Africa.

As long as Boko Haram operates in countries having little geostrategic importance, the group will get limited attention from the western corridors of policy making. Heads of state of both Nigeria and Cameroon have asked for international assistance in fighting the Boko Haram insurgency, yet there seems to be no interest in the pleas coming from Africa.

BBC and CNN ran front page covers for at least 10 days post the Paris attacks. As I write this, the CNN’s front page still features a Paris bombing story. The bombing in Nigeria that killed dozens and injured nearly 120 people doesn’t even merit a story – let alone a front page story.

The harsh truth is that for African lives lost, there will be no vigils, no protests, and no marches.

The truth is that Black lives only matter if they are American Black lives.

There will also be no hashtags or Facebook filters to mark solidarity with the African victims, because the lives of Americans and Europeans are far more valuable than the lives of mere Africans.

A pre-requisite for Western attention is relevance. As long as Boko Haram doesn’t knock on their doors, nobody is going to answer. What is terrifying, however, is the prospect of them knocking on the doors of the West when they are too large to defeat. But I suppose that is the only time it will get the ‘strategic importance’ it is cunningly avoiding right now. Perhaps then, the world will #PrayForAfrica and #PrayForNigeria?