A lesson in entrepreneurship: From the Khoka at LUMS to Monal in Islamabad 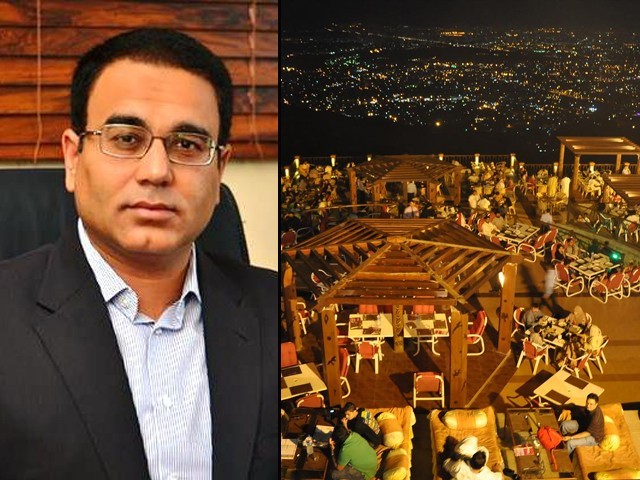 The Monal emerged as an ambassador of Pakistan. Any foreign delegation visiting Pakistan on the invitation of the Foreign Office, Board of Investment and many other Ministries, was brought here to experience the positive side of Pakistan.

Luqman Afzal is a graduate from the BSc class of 2002. He graduated with a major in Economics and minor in Social Sciences. During his time at LUMS, his entrepreneurial spirit was nurtured and to date he has continued to cultivate his zest for entrepreneurship. He is fast paving his way up the hospitality industry in Islamabad. Here he talks about his journey, from managing a cafe at LUMS to establishing a fine dining restaurant.

“It still seems like yesterday, though it has been 14 years, when I asked my father for money to buy the LUMS Khokha Inc shares. Buying shares of this facility and operating it for 18 months provided me with my first practical exposure to the real world of business, very early in life.”

Afzal recalls going to the LUMS GM Administration’s office every day, to get a telephone extension sanctioned for the Khokha in order to start free-delivery to hostels. He is very proud of his achievements during his first venture because he transformed a plain snack bar into an elaborate café, offering both ready-to-serve and gourmet meals, with the price of its shares having increased more than five-fold by the time he graduated in 2002.

“After completing my BSc, I continued my business career by developing, on lease from the Government of the Punjab, a family recreational area at Saint Mary’s Park, Gulberg, Lahore in October 2002. I wanted to offer entertainment opportunities for families; something more than just dining out. F-1 Traxx offered recreational facilities catering to all ages: remote control cars on tracks, battery-operated cars for children to drive, E-scooters and petrol quad bikes for teenagers to ride, a snooker/pool lounge, and many other others,” said Afzal.

Along with these facilities, he also set up a restaurant, based on the traditional village theme, which offered a complete range of barbeque, Pakistani gourmet cuisine, fast food, and pizza, along with a large variety of drinks. The meals were served on the best quality clay crockery, provided immaculate service and most importantly the hygiene and sanitation of the kitchens were ensured to maintain the food quality.

In August 2004, Afzal leased another project within the premises of the same park. This was a skeletal cement structure, which, in conformity with the country theme, he transformed into a tree house by decorating it with wooden logs, timber planks, rope and by letting Jacarandas and Gold Mores grow all around it. Within this tree house, he placed chimes that tinkled with the breeze and subtle lights that created an ethereal ambience. A unique concept in Lahore, the tree house turned out to be a huge success.

In June 2005, Afzal decided to bid for a project in Islamabad which changed the course of his life.

“The Capital Development Authority published an advertisement in leading national newspapers in June 2005 inviting expressions of interest from parties with relevant experience to lease and operate a restaurant at Pir Sohawa. This was a great opportunity for me, not merely in terms of business, but to achieve my dream of establishing a world-class, fine dining restaurant. I was apprehensive that not many people would want to travel so far, on a perilous climb, just to eat out. I reconsidered my plans but there was something about the verdant serenity of the silent Margallas that allured me and I took the plunge, and sent in my bid. Twelve parties submitted their proposals and after detailed evaluations and various presentations, three parties were short listed and I won the bid.

My first task after getting the official possession of the restaurant was to equip the designated kitchen areas with the best and the most modern kitchen machineries so that it could serve a menu which would suit the cosmopolitan city of Islamabad and the people who would visit it from within and outside Pakistan. The kitchens comprised different food sections and were made to serve Pakistani dishes as well as International cuisine.”

Afzal recalls the various issues he had to resolve while setting up the restaurant.

“The first task was acquiring water for the restaurant. We used mineral water for cooking, but tap water was required for dishwashing, for washrooms and for the cleaning of the huge outdoor area. Cleanliness and hygiene, especially of the washrooms, is one of critical importance in the hospitality industry. However, water was not available anywhere near the premises, so he had to procure it from the Gokina Village, which is situated four kilometres downhill.”

Since the restaurant was required to meet international culinary standards, the next most crucial requirement was Sui Gas for the kitchens. A multinational company was taken on board to provide bulk cylinders of liquid LPG. To date, liquid gas comes in tankers to The Monal and costs six times as much as the commonly used Sui Gas. The pressure declines in the winters as liquid LPG freezes, owing to which, extra commercial cylinders have to be used in winters to maintain the pressure.

Initially, approximately 150 people were hired from the surrounding villages. The intention behind hiring local staff was to integrate the local people with The Monal in such a way that the social and economic benefits that the restaurant would generate could flow down directly to the local populace and contribute towards its socioeconomic uplift. Apart from direct recruitment, the locals were also involved in indirect ways. For instance, the contract for managing laundry (clean linen and uniforms for the staff on a daily basis) was given to them along with contracts for other supplies of local produce such as milk, seasonal vegetables etc.

The experienced restaurant managers trained and groomed the raw, and sometimes uncouth, staff that was not even aware of the basic norms of the hospitality industry. An eight-hour course was designed for them on personal hygiene, proper wearing of uniforms, professional body language, posture discipline, table layout, service manners etcetera. They were trained not just through instruction, but also through practicals.

The Monal had only just started gaining popularity amongst the residents and diplomats of Islamabad, when the Marriot Attack took place in September 2008. With this tragic event, the scenario of Islamabad’s social life changed altogether. A police check post was created on every major road, as the terrorists continuously threatened to target important public spots and official buildings. During this period, the restaurant incurred heavy losses – both in financial terms as well as in terms of morale. However, the situation eventually improved and The Monal once again started taking flight towards the mid of 2010.

“The Monal emerged as an ambassador of Pakistan. Any foreign delegation visiting Pakistan on the invitation of the Foreign Office, Board of Investment and many other ministries, was brought here to experience the positive side of Pakistan. Any foreigner, who came with the impression of Pakistanis being terrorists, witnessed a perfect civic society, which could live in harmony and coherence, and tolerate each other’s different religious beliefs and backgrounds. The restaurant displayed the human face of Pakistan – people from different parts of the country, speaking different languages, sitting together with families and enjoying the environment in the most civilised manner.”

Afzal shared that a significant reason underlying The Monal’s attraction and success is its affordability. This factor was, in fact, kept in mind while pricing the menu. The restaurant has expanded to catering events as well, with its two marquee halls. Apart from that, the company is also involved with an amusement project at Lake View Park under the name of F-1 Traxx, Islamabad.

“The company presently employs 900 people, which I consider my biggest achievement. The most interesting fact is that The Monal’s team of 450 people is being headed by the same person who used to warm pizza slices at the Khokha and F-1 Traxx. Islamabad’s team, which comprises 150 people, is being headed by the person who used to be the cashier at the Khokha at LUMS. I am proud to have groomed people to hold higher positions.”

Talking about entrepreneurship, Afzal said that it is ‘all about consistency’. He advised aspiring entrepreneurs to not get disappointed if the business does not start paying back from the first day as no business starts paying back immediately.

“Take initiatives, work hard with clear intentions, and then leave the rest to God. A strong belief in your ideas and then a continuous struggle to make other people believe in them, coupled with the ability to fearlessly execute these ideas in a professional manner is perhaps what turns your dreams into reality. Your success is not just the amount of money you are making at the end of the day but also the social contributions you are making and the job opportunities your business is creating,” said Afzal.

The LUMS Students & Alumni Action Committee (LSAAC) is a collective of active members of the LUMS Student Body, both past and present. For more stories, follow @LifeAtLUMS (twitter.com/LifeAtLUMS)