Pakistan’s children are unsheltered, uneducated and uncared for 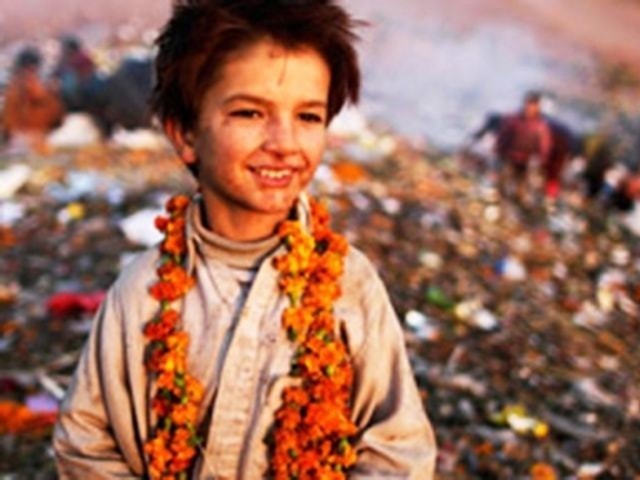 The Constitution guarantees a child’s right to food; yet every year 0.6 million of the 1.4 million children born will suffer from malnutrition. PHOTO: AP

The Pakistani state treats its children with criminal neglect despite many laws and policies to protect them. The Constitution guarantees children between the ages of five and 16 the right to compulsory education; yet over six million children are out of school, and others in government and private schools receive a compromised education with little practical relevance to their lives.

Pakistani labour laws, although ambivalent on what constitutes juvenility, are consistent on the fact that children should not work in hazardous occupations or long hours or at all if they are under the age of 12. Yet, children work long hours and in dangerous occupations; they operate machinery, they work in garages, they are seen late at night serving as help in shops and hotels, they help their mothers pick pesticide-sprayed cotton, they glue glitter on bangles, and handle chemicals to make incense sticks.

Pakistani law vitiates consent of a child under the age of 16. In other words, he or she simply cannot consent to a sexual act, regardless of how willing and mature they may appear; yet this concept befuddles many who want to deny rampant levels of child abuse and child sex work.

Pakistani law requires the birth registration of all children, yet most births are unregistered, jeopardising a child’s ability, from the get-go, to acquire basic citizenship rights. Juvenile justice laws provide that children in prisons should be rehabilitated rather than suffer harsh penalties such as capital punishment; yet with the resumption of the executions in Pakistan, we have borne witness to executions of Shafqat Hussain and Aftab Bahadur who were juveniles at the time of their offence. The Constitution guarantees a child’s right to food; yet every year 0.6 million of the 1.4 million children born will suffer from malnutrition adding to the number of currently underweight, stunted or wasted children. This inevitably paves the way for a national catastrophe and a generation of physically and mentally disabled children unable to contribute to the GDP as adults, deprived of their right to life, and a huge burden on the state.

In the recent IDP crisis due to operations in Waziristan, the UNHCR highlighted the number of unaccompanied minors and children in general who fled their homes on foot. Despite laws criminalising child marriage, children are married off at a young age and girls suffer the perils of early motherhood. In urban centres, thousands of children go missing every year; due to defects in the state’s investigative apparatus, most are never found and inducted into exploitative jobs in far flung areas.

One-off, well-intentioned, NGO-type projects that alleviate the misery of a few are important starting points. These are needed for the very reason that exposure to the issue, through street children’s projects for example, could facilitate larger advocacy. What’s needed is a firm commitment towards structural change that addresses the state’s abdication of responsibility towards children – not just reneging on providing fundamental rights to nutrition, health, and education, but impunity in the face of the criminal commodification of children – including but not limited to, through child labour, marriage, sex work.

While Pakistan’s aggressive neo-liberal policies have no room to accommodate social welfare, its ratification of the Convention on the Rights of Child since 1990, is a useful strategy to compel it to meet its obligations beyond token-ist and benevolent gestures. The state also needs to be reminded that this is a big crisis that would strain its very ability to function and be productive.

A new commission on children’s rights and new laws should be formulated to address institutional gaps. However, we must demand immediate solutions within existing legal frameworks and departments. Put district education committees to work to be accountable to the public for any out of school children and fixing dysfunctional government schools. Put labour inspectors to task to provide break-downs of the number of children working in illegal occupations, and give citations to offenders. Implement existing labour rights for adults, including old age benefits, social security, and minimum wage, to minimise the burden on families. Implement the juvenile justice laws in letter and spirit.

The government should introduce subsidies in the federal and provincial budget to parents in the form of cash payments for food for every child in school and school lunches to reduce the financial imperative they face when they don’t put children to work. Provide clear directives to people that they must not give loose change to child beggars, as that practice is illegal. They must not hire children in their businesses and homes. Build protection mechanisms for children who are in, or risk, joining exploitative jobs.

But most importantly, we need an attitudinal change.  We are not helping children when we hire them, regardless of whether we see it is as a social service in times of existential hopelessness. We are not helping children when we remain oblivious of sex work or abuse and take absolutist positions against it. If we accept it at a personal and political level, we can begin to address the pervasive problem of child sex work and regulate the industry with zero tolerance for children in the profession. When we dismiss children as unworthy of love, because exposure has added the stigma of experience to their tiny bodies, we amplify the violence of their already stolen lives.

Today, on Universal Children’s Day, let’s remember that all children are beautiful and deserve the same and the best, regardless of their social status, class, caste or religion.