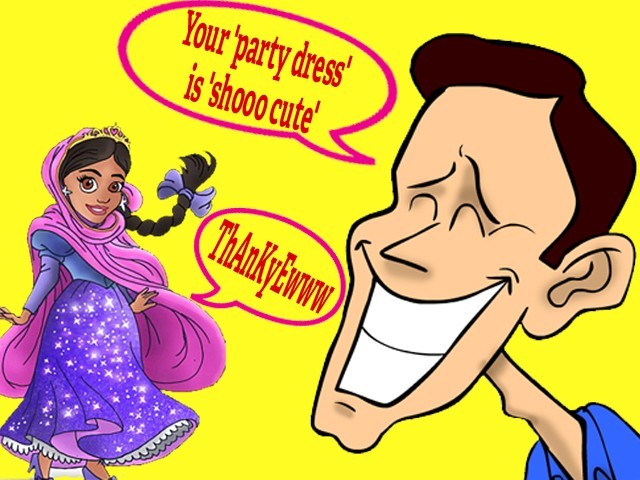 This is usually a fancy piece of clothing reserved for a ‘dance party’ that sits in the closet unused and very lonely.

People of every country have their own slang, consisting of words they have either created or adopted. Here are some of ours:

Well, what else would jeans be made of? Plastic?

This would be as redundant as saying ‘gosht ka insaan’ or ‘lohay ki gari’.

Yes, denim is the fabric used to make jeans. Thanks.

2. ‘Over smart’: Usually said on Facebook to someone perceived to be clever.

Only in Pakistan is intelligence used as a slur. Imagine parents using this on their children,

“Don’t try to be over smart. Stay within your limitations. You aren’t very intelligent after all.”

Even today, there are people who type ‘dis’ instead of ‘this’, and it makes their arguments seem less intelligent.

No, no one will take your rants on Kashmir seriously if you say,

I don’t understand the point of omitting one extra letter. Is it to save space? Don’t be over smart.

Unlike other slang words, this actually uses more letters. I actually met someone who once said,

Well, is it a ‘special’ school?

Look, that’s just too much information.

Unless your keyboard is broken, there is no excuse to type like that.

As Zarrar Khuhro said on Twitter, the sort of folks who say ‘Dance party’, don’t get invited to any sort of party.

This is usually a fancy piece of clothing reserved for a ‘dance party’ that sits in the closet unused and very lonely… much like the sort of person who says ‘party dress’.

As opposed to what? Hate marriage?

On second thought, hate marriage would be an appropriate term in Pakistan.

Short for ‘enough said’, the correct use of this phrase is to complete a very short, usually emphatic sentence. Instead, what we do is end a sentence with ‘Nuff said, and then follow it with a five thousand word diatribe.

Any girl over the age of twelve caught using this phrase should be thrown off an airplane with a parachute after being trained by an instructor who graduated from an Axact university.

When certain not shoo sweet people dislike what a journalist says, they call them a paid journalist. Wait, you expect us to do this for free?

This is why aliens don’t visit us.

This term of endearment for a significant other has spread like a disease across the world.

Are you laughing yourself to sleep?

As the meme goes, this sounds like the calling of a very sophisticated cat,

“I would like to be fed some caviar. La’mow.”

Normally, this is used to take the heat off a rude or snarky comment by guys who think the overused phrase makes them sound cool.

You know what I say to such people?,

I am a man of simple pleasures, and I love it when two Pakistanis are arguing on the internet, and one sarcastically calls the other a ‘genius’, except that they can’t spell the word correctly.

Oh irony, how delicious you taste.

For some reason, we use this term to describe the image quality or screen resolution of an electronic device, usually a cell phone or a camera.

English translation: One fun has happened after reading this article.

If you are feeling tired, fresh up ker kay ajao.

Usually used to confirm that we like something. Best hai yaar!

Normally used by mothers when they are particularly angry. If a seeday haath ka thappar hurts then apparently the ultay haath variety hurts more. It is like a golfer selecting a more powerful club,

“Wait, I’ll need my nine iron for this.”

When I was a kid, I thought this was a fever so severe, it left the patient thrashing in pain until they broke their neck. I don’t know what sort of a jeanius came up with this term.