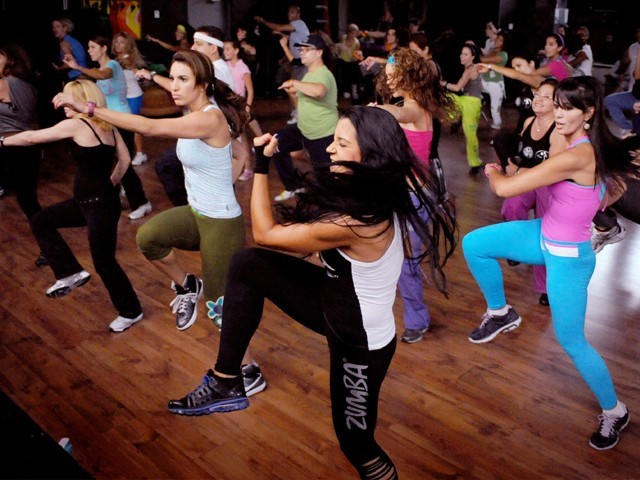 Don’t let anyone fool you into thinking that it’s not intense, because it really is! PHOTO: ZUMBA.COM

It’s been a few months into your first desk job and you realise that you are expanding horizontally. You can physically feel your behind increase in size as you sit heavily, day after day on a swivel chair in front of your stupid screen. Not only does a nine to five (read nine to eight) job drain you psychologically, because you would much rather be reading a book or travelling the world than sitting in an office signing off emails with ‘regards’, you’re also physically degenerating into a lazy, large, unhealthy mass.

And this is precisely why I started Zumba.

Before you confuse Zumba with yoga or a dancing class, it is a great fitness program that involves aerobics and dance elements but is more than that – it includes cardio, and if you take a one-hour class, you can burn anywhere from 500 to 1,000 calories!

Don’t let anyone fool you into thinking that it’s not intense, because it really is! So before you dismiss it with an opinionated wave of your hand, try it out!

Zumba is great, not just because it has helped tone my muscles, given me a semblance of abs, provided an opportunity to punch the air and release stress after a tough work day, but because it also provides significant amusement.

You’re stuck in a room with 15 to 20 people in front of a large wall-sized mirror, and you have to sweat it out for a whole hour because you can’t really admit physical defeat by panting to a stop while trying to sneak out. You’d be like,

“Really? That lady wearing dangly earrings to a fitness class can do it and I can’t? No!”

After a few classes, you start to realise that there are a few types of exercisers that stand out:

I mean I get it, the more oomph you put into your moves, the more calories you burn and the more strenuous and rewarding the experience, but come on! Some people just overdo it.

Their serious ponytail bounces at the speed of 120 miles per hour, their expression concentrated like that of a commando in a boot camp, and their moves are more intense than the instructor’s. If the instructor is jumping half a foot into the air, this lady will be two feet up! If the instructor is bending halfway to the floor during a faster move, this one will jerk herself to touch the wooden floor and zip up. I mean, seriously?

She does everything, you guessed it, much slower than everyone else in the class. At her pace of Zumba, she could eat a sandwich and put on mascara at the same time. If we’re supposed to do high knees, she’ll do more like really low knees. If we’re supposed to squat and hold for a miserable 30 seconds, she’ll bend for a couple of seconds then stand up to have a really long drink of water. At other times, she will just stop in the middle of a move, which is really annoying if you’re next to her because it’s a move that requires you to step from right to left and she just stays still right there.

Just. Cannot. Stop. Staring. At. Themselves. I mean we all look at ourselves in the giant mirror; you’re actually encouraged to so you can perfect your moves and posture, but it’s more of a look at my arms when I flex or at my knee to make sure it doesn’t crack open during a lunge. And you obviously look at the instructor. But the ‘self-starer’ – this smouldering-eyes lady does not look away from herself. She looks into the mirror like Tyra Banks would want her models to.

You have a more entertaining variety of the ‘self-starer’ as well – one that adds a pout to the whole look. I kid you not, there was a girl who pouted (try as I might I could not even imitate it later) for the duration of the entire class. And the worst part was that she was doing all her moves perfectly.

So much energy in the kicks and punches and jumps – and all the while the pout stayed intact! I have to admit, I was impressed but also a little disturbed.

I mean, I am not an outpouring of grace and charm, so if I’m calling someone awkward in a Zumba class, it signifies something.

This sweet lady just cannot get her moves right. She is always two moves behind, always looks abashed and worried, and she always does her moves from the opposite direction. So if you have a class of 15 girls skipping to the left, you’ll find the penguin fumbling to the right – and everyone can see her because of the said giant mirror. And the problem is, once you start off from the wrong direction, it is quite difficult to break the rhythm and get back in sync with the rest of the class.  Sigh! Sweet, sweet awkward penguin!

You are bound to come across other types as well, which include:

So, who said staying in shape cannot be a fun experience?