Is it terrorism itself or the cities where terror strikes that is more appalling? 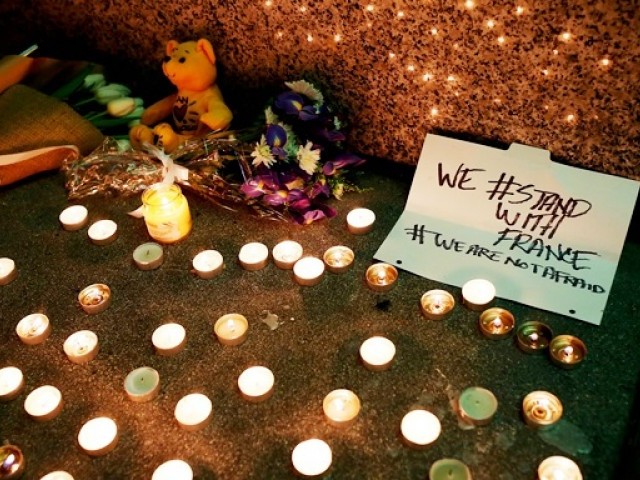 Around the world, people are reacting to the news of the attacks. These candles were left in San Francisco, California. PHOTO: REUTERS

The country’s capital was rocked by the deadliest terror attack it has seen in over 20 years. Dozens have been reported dead with some calling it a “satanic attack” and the world has not shed a tear.

Yes, you have not posted or tweeted about it. You did not come up with any hashtags or express any condemnation. You just, perhaps, accepted it as a harsh reality and moved on because the capital was Beirut not Paris.

The night before Paris was attacked, Beirut lost more than 40 lives and you moved on. You are not just the common Twitterati, you are the international media empire, you are the world leaders, you are the humanitarian organisations, you are the celebrities and sports stars, and all of you refused to shed a tear for Beirut.

Paris, on the other hand, at least has the comfort that it has all of your support in these trying times. The bomb which explodes doesn’t discriminate when killing people around it but we, ‘dignified humans’, have the audacity to discriminate between victims of terror.

Is it terrorism itself which is more appalling to us or is it the cities where terror is striking the more notable fact?

This is not the first time that you have shamelessly exhibited this selective empathy. Earlier this year, when Charlie Hebdo was attacked, we saw world leaders marching down the streets of Paris in solidarity. How many of those world leaders visited Kenya, when a massacre took place in Garissa University just three months later. The victims of terror may be traumatised but they are not blind. They can see and they can feel. They are not numb to our ignorance.

It is ridiculous that the world is becoming more polarised not just because of terror attacks but also by our reaction to these attacks. Our selective empathy is so criminal that I am confused if we are aiding the terrorists or are the terrorists aiding us in polarising the world.

It is said that terrorism is contempt for human dignity but is selective empathy worse than terrorism?

If my heart will continue to express shock on an attack in Paris, New York or London but will accept terrorism as a norm in Lebanon, Damascus, Baghdad, Sana’a, Karachi and Nairobi, we will be showing more contempt towards human dignity than the terrorists. If we as an international community swear to never forget the attack on the twin towers 15 years on but we deliberately choose to ignore the on-going apartheid and subsequent killings in Palestine, we are being worse than the terrorists. At least there is some consistency in the acts of terrorists.

Condemning the attack on Paris alone will not address this issue. Terrorism and oppression anywhere and everywhere will have to be condemned with equal measure. This not a white lives versus brown lives debate or a non-Muslim lives versus Muslim lives debate – this is an empathy versus apathy debate. This is a debate about how our conscience reacts selectively to tragedies. All terror attacks cannot be called human tragedies because we failed to consider all victims of terror as humans.

Who are the “we” who share these values? Are these just the citizens of Europe and North America?

What are these “values” which Obama says we share? Is it sacredness which is attached to only certain lives?

Obama’s words are as superficial as the US’s counter terrorism policies which funded ISIS, used drones, invaded countries for false intelligence and imprisoned innocents in Guantanamo. All terror attacks cannot be called human tragedies because we as humans have failed to consider all victims of terror as humans.

Actions speak louder than words and our actions have proven that the term “humanity” does not refer to all humans anymore and that there are no share values.

How can I tweet #PakistanWithFrance when Pakistan refuses to even stand with itself. Less than a year after the barbaric Peshawar Attack, Taliban sympathiser and a terrorist himself, Abdul Aziz has openly threatened to start his perverse radical campaign again. He is again dwelling a government mosque to spread hate and terror and we cannot seem to do anything about it besides “beefing up security”. Terrorists continue to sit and thrive in our capital and remain untouchable and we carry on with our lives expressing our support for other capital cities.

In the wake of these recent terror attacks on Paris, our ignorance continues to rule the day as many who are sympathising with Paris have started to blame the recent inflow of refugees into Europe as the cause. No one would care to reflect that these refugees escaped from their countries due to such deadly attacks which continued to mount and rise as the world refused to shed a tear or even post a hashtag when hundreds of thousands were being killed and the homes of these refugees were being burnt to the ground in Syria and Iraq.

I mourn for you Paris, because you are stuck between two of the most destructive forces in the world. Your attackers include terrorists and your supporters comprise of ignorants. A beautiful city like you does not deserve such ugly luck but due to our collective ignorance, we have already allowed many beautiful cities to be reduced to ashes since the start of this century.