#ParisAttacks: Blaming the refugees for the attacks on France is like blaming the victim for escaping the abuser 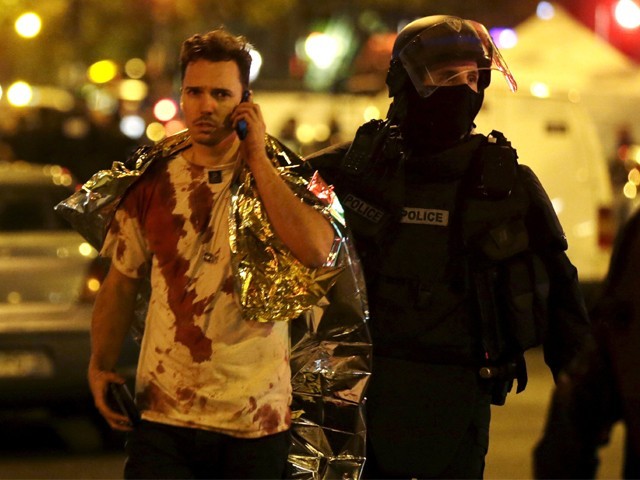 A blood covered victim is assisted by a French police officer. PHOTO: REUTERS

As I write this, there are over 150 dead across Paris in one of the most revolting terrorist attacks in the history of France. Scenes are described as pure carnage. Reportedly, the attackers indiscriminately chopped (gunned) down innocent civilians with gunfire and explosives to horrific effect.

One witness inside the Bataclan simply said,

“It was a bloodbath.”

“They were shooting at us like we were birds.”

The Telegraph shared some stories of the lucky Parisians who escaped the theatre.

“Everyone got onto the ground. From that moment, instinct kicked in. With each volley you try to get as far away as possible from the gunmen – impossible to say how many, it all went by too quickly.

I tried, with some other people, to get onto the stage where there was an emergency exit on the right.

And there it was chaos, people were terrified, pleading to survive, and others pushed and pulled at us to get behind the stage.

We hid in a room on the right, by the stage, thinking that it was an exit, but no.

A member of staff in the room said that the emergency exit was on the other side of the room.

We still heard shooting. After a few more seconds or minutes, nothing, and we saw people edging towards the emergency exit – when I think about it, the gunmen must have been reloading at that point.

All of our group then decided to cross, passing behind the rear curtain. Then we found ourselves outside, and ran towards the boulevard.”

While further details will emerge with time, early reports clearly point to the origin of the terrorists. Reportedly, many of the shooters yelled “Allahu Akbar” as they committed acts of violence, and some spoke of Syria and Iraq.

Watching the nauseating scenes unfold on BBC, CNN, Twitter, and Facebook, I felt sympathy for the victims as well as the entire nation of France itself. I was instantly taken back to the attack in Peshawar where around 140 school children were barbarically murdered in 2014.

French President François Hollande swiftly called a state of emergency, and ordered all borders to be closed. He condemned the ‘terrorist attacks of unprecedented proportions’, and vowed a swift retaliation.

Worrisome was the knee jerk response from experts on TV as well as social media blaming the refugees for these events. Already, there is talk of clamping down on the entry of refugees, when there should be more sympathy for their plight, after seeing first-hand what they try to run from.

We aren’t sure whether as of yet whether these militants came into France as refugees or not, but let’s assume they were, for argument’s sake. As the extremist chatter on Twitter reveals, France was most probably attacked by ISIS tonight. Regardless of how they came in, they clearly weren’t refugees. They were wolves in sheep’s clothing, and now we have taken to blame the sheep themselves.

The refugees who have fled Iraq and Syria in the thousands, of whom countless have perished in the seas including men, women, and little toddlers, have escaped the very sort of evil which attacked France.

For those who couldn’t understand why a refugee would find treacherous ‘water safer than land’, can perhaps find some appreciation after seeing on their television screens what these monsters are capable of. Just like the innocent Parisians who tried to escape Bataclan by any means necessary, the desperate refugees, through blood and tears, have travelled to Europe to survive the grasp of pure evil. To point a finger at them for the terrorist attacks is as inexcusable as grouping a victim with their attacker.

The last thing Europe should do is turn its back on refugees now. Like the Syrian baby Aylan Kurdi, there have been so many innocents who have faced unbearable tragedy. The world is at war and every victim deserves to be treated equally.