This restaurant in Islamabad thinks misogyny is an acceptable marketing tactic 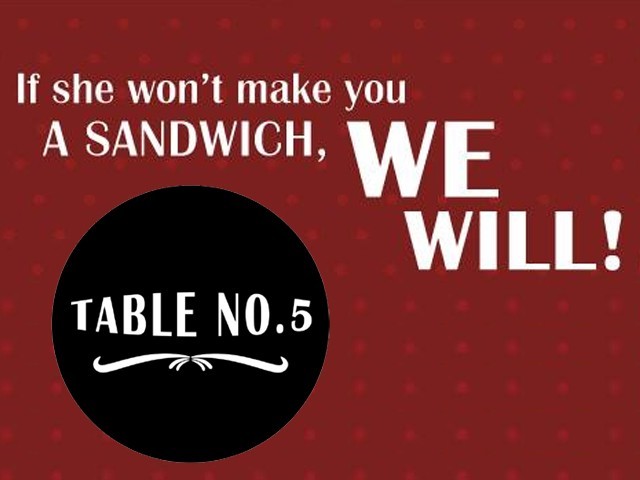 I would urge readers to call this establishment to let them know that misogyny is unacceptable.

This Islamabad-based eatery is named ‘Table No. 5’, but perhaps they should call themselves ‘Mentally Unstable No. 5’.

If you thought that joke was bad, then get a load of these.

If their sexist ‘humour’ wasn’t nauseating enough, their food is named after celebrities such as Sean Penn and Bill Cosby. You know, men who have a record of physically and emotionally abusing women.

“After he got good and drunk (again), Penn climbed into Madonna’s house, where she was alone. He then grabbed her, tied her to a chair, and assaulted her for hours, both physically and emotionally. He then went out for more booze, came back, and kept up the beating. Madonna only escaped after telling Penn that she had to go to the bathroom, which meant he had no problem battering, beating, bloodying, and bruising the supposed love of his life, but felt it would have been too degrading to make her pee in front of him.”

And then there is Bill Cosby, who has raped so many women, he probably has a special place in the afterlife just for him.

Daily Mail talks about 35 of the 46 survivors who have publically accused the former sitcom star:

The 35 women, ranging in age from their early 20s to 80, have bravely agreed to be pictured for an issue of New York Magazine, set to be published on Monday, while revealing the details of their encounter with the disgraced comedian.”

Appalled by the nasty references, Pakistani women chose to remind ‘Table No. 5’ on their Facebook page of the unacceptability of their branding.

Here, the restaurant tried to feign innocence by resorting to gas-lighting:

If we are expected to believe that ‘Cozbee’ is a made-up name and we are jumping to conclusions, then the owner of this restaurant is pretty bucking cupid.

Then, there is the mysterious fan boy, energetically defending the restaurant in the most bizarre manner possible:

On a side note, this is what the above mentioned term means:

“Gaslighting or gas-lighting is a form of mental abuse in which information is twisted or spun, selectively omitted to favour the abuser, or false information is presented with the intent of making victims doubt their own memory, perception, and sanity.”

You can educate yourself more on this form of abuse here.

The restaurant’s badly thought-out marketing plan has given rise to a storm on social media, and for good reason. On their Facebook page alone, numerous Pakistani women have left poor reviews for the restaurant.

Disappointingly, not as many men have. What’s worse, a minority has expressed open appreciation.

Undoubtedly, some will ask why the aggrieved are protesting so passionately. Sadly, no one would have fired this query had the jokes, instead of being sexist, been racist or anti-religion.

What is it about sexism that finds such casual acceptance? If issues such as racism and bigotry are condemned with little backlash, why does sexism draw apologists out of the woodwork?

Offhanded misogyny, carefully packaged in a seemingly acceptable joke, is dangerous because it convinces some of the righteousness of sexism on a subconscious level. Equal rights for men and women can’t be achieved, when those capable of initiating change consume media that convinces them of the superiority of a single gender.

Certainly, I can’t fathom why the owner of this business has decided on such a counterproductive plan. How can hatred of women override all common sense?

As part of an industry that thrives on good-will, naming your food after rapists and abusers is far from a clever way to get attention. Certainly, it makes one wonder what ingredients Table No. 5 are using in their food.

I would urge readers to call this establishment to let them know that misogyny is unacceptable.

But please, keep it clean. Don’t drop to their level of distaste.