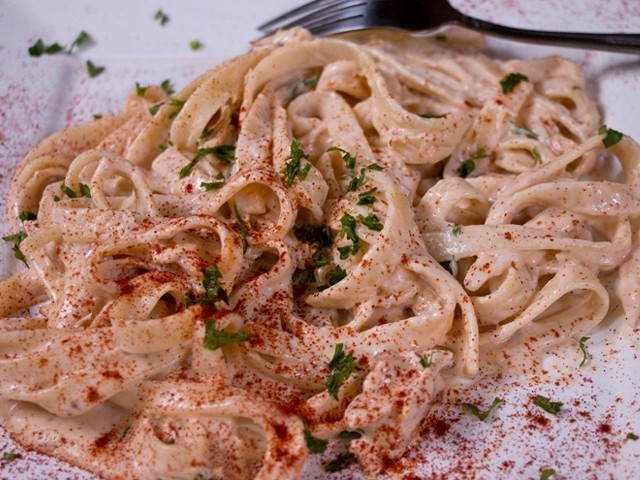 The cayenne, nutmeg and mustard powder are there to make all the flavours sing. PHOTO: IZZAH NAEEM KHAN

When you have a sister who orders Fettuccine Alfredo at pretty much every restaurant we go to, it’s time to take matters into your own hands. Hence, I decided I needed to make a better version at home. And trust me when I tell you, it wasn’t just better, but the best she had tried. The spicy blend added the right spice hit that is required to add to its creamy flavour.

I completely understand that I don’t need to throw in cayenne pepper and paprika in everything I cook, but why the hell not? If these revered spices give that oomph factor to my platter, I’m going to go right ahead and throw in a good sprinkling.

This Fettuccine Alfredo is not spicy, yet has a nice kick to it, which comes from making the sauce in the very same pan I sear the chicken in. I make the white sauce in the caramelised chicken flavour that sticks to the pan. It adds amazing depth to the flavoursome sauce; the cayenne, nutmeg and mustard powder are there to make all the flavours sing.

I love paprika because it’s really not a spice at all, and it’s perfect if you want to add a touch of red to your dish, and Fettuccine Alfredo definitely needs some rouge. But please don’t sprinkle cayenne, that stuff is hot!

I packed some for my dear friend who was suffering from a terrible toothache and looked miserable while sipping on her noodle soup. At the sight of my pasta, she abandoned her noodle soup and gobbled down the pasta. Do you see where I’m going with this?

1. Begin by mixing the spices (cumin, cayenne, salt and pepper) and rub the mixture onto the chicken breasts.

3. Once the chicken is cooked, remove to a plate and shred.

4. Now in the same pan, on medium heat, melt the butter.

5. Next, add flour and stir it really well using a spatula for about a minute. Scrape all the brown bits (left over from the chicken) stuck to the bottom of the pan. This is where the flavour comes from!

7. Slowly pour in milk and stir as you go along. The sauce will thicken up in no time.

8. Once the sauce has thickened, add salt, nutmeg and paprika, and stir. Turn flame to very low.

9. In another saucepan, bring water to a boil.

10. Add a teaspoon of salt and cook your fettuccine pasta according to the packet instructions.

11. While the pasta is cooking, finish the sauce by adding heavy cream and the shredded chicken. Stir it well.

12. Once pasta is done, dump it into the sauce and mix well.

13. To garnish, sprinkle chopped parsley and some paprika for colour.

Make sure you have it when it’s nice and warm.

I guarantee some major gobbling!

The author is a food enthusiast and recipe developer. When she is not at her day job crunching numbers, she makes cooking videos in her apartment in Los Angeles and blogs at rookiewithacookie.com

I’m not bragging, but this is one unforgettable chocolate cream pie

Embrace the spirit of barbeque with some appetising Pakistani seekh kebabs