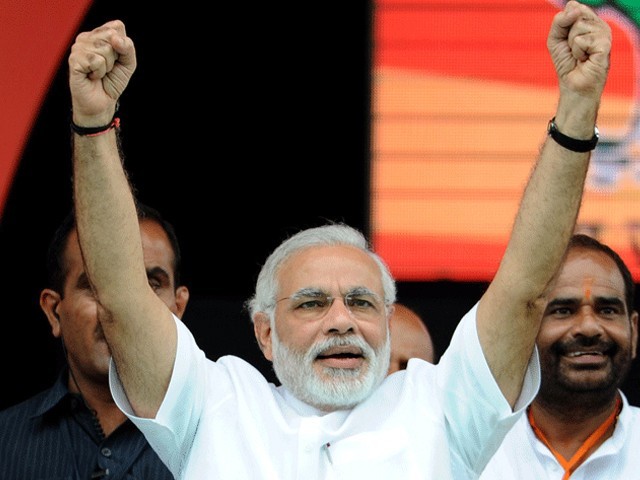 "This 21st century election will show where Bihar stands not only on the map of India, but also on the map of the world," Modi told the crowds. PHOTO: AFP

It’s not Pakistan, but India that is celebrating the defeat of Narendra Modi in the recently concluded elections in the eastern Indian state of Bihar. Never before has the country rejoiced so much as after the verdict of the regional election. The slogan “Bihar saved India” is becoming increasingly popular on social media.

I am very proud of my state of #Bihar ; we are simple and hardworking, humble and of modest means. But today we saved the Idea of India.

"Defeat of @NarendraModi in Bihar is defeat of divisive BJP and it should be welcome by all patriots.India is finally saved." #BiharResults

This speaks volumes of the general political stance of the people in India.

Modi came with a mandate to usher in a new era of economic reforms. On the contrary, he launched a new era of divisiveness in India’s national politics. His supporters and ministers started provoking fanatics, and thereby, threw the whole nation into the throes of intolerance and religious tension. The situation has become so bleak that people are being killed in the name of cow-protection and for eating beef. Instead of focussing on nation building by cementing the divide in society, the Modi regime started practising politics that are characteristic of pre-partition days – playing one community against another.

The deplorable political aims of Modi’s government are apparent when you look at the issues that have dominated the popular consciousness in the last 17 months:

– Attacks on churches and the ban on meat

These are the topics that have dominated the national narrative so far. The Bharatiya Janata Party (BJP) government has been working on these agendas with an appalling level of aggression. A government which was voted with an overwhelming majority on the promise of economic development has become an agent of medievalism, rather than modernity.

The government has been quite hostile towards those who are protesting against the rising intolerance. The right-wing Hindu groups dubbed the writers, litterateurs, and scientists who returned their awards, in protest to the Indian government’s intolerant policies, the enemies of BJP. The Modi government went to the extent of orchestrating counter protests against the conscience-keepers of society. The popular film stars Shahrukh Khan, Naseeruddin Shah and others were dubbed ‘anti-national’, because they spoke their minds regarding intolerance in India.

They were dubbed ‘Muslims’ and therefore ‘anti-national’ by Modi’s goons.

Muslims are, in fact, gradually being pushed to the margins of the political sphere, and a concerted attempt is being made to dig a deep wedge between the majority and minority communities.

The victory in Bihar comes at this moment of social and religious confrontation. It demolishes the hubris of Modi, who has now become a prisoner of his own mythology.

Though it was a regional election, the fact that Modi was the face of the election makes the verdict a clear referendum on his performance in office in the last 17 months. The prime minister addressed more than 30 rallies in two months and thought that his oratory skills would win him the votes of the masses.

But by rejecting him, Bihar has demolished Modi’s aura of invincibility.

Bihar has shunned BJP’s communal politics and Modi’s duplicity when it comes to the secular values of the country.

One shudders to think what would have happened had BJP secured a strong position in Bihar. It would have given the Hindu sectarian forces a firm go-ahead to terrorise the society in the name of religion. The way things were moving, a victory in Bihar for the right-wing party would have meant intensification of conflict in society, an increase in political power of the fringe elements and a stamp of legitimacy to Modi’s narcissism.

But the voters of Bihar saw through the agenda of BJP and they rejected its negativity and reposed faith in secular alliance.

The Bihar result will have greater political implications and ramifications, beyond the regional boundary. The opposition gets a new impetus. It would not be easy for Modi to govern the country now. It’s a pity that a man who gained such a historic mandate just 17 months ago looks so politically vulnerable. The verdict in Bihar shows that the politics of divisiveness cannot go too far without being crushed.

What people want are jobs, security and development, not tension in society.

The more Modi looks politically vulnerable the more his opponents in the party would speak up. It is apparent that there is a strong undercurrent of resentment against Modi and his way of doing business. With the defeat in Bihar, such forces would feel emboldened and wait for an opportunity to strike.

Modi came to Delhi with a huge political baggage of the Gujarat massacre in 2002. As chief minister of Gujarat, he presided over the worst communal calamity that claimed the lives of around 1,000 Muslims. People of India trusted Modi and his words when he said he does not have any divisive agenda and that he just wants development. But 17 months into power, Modi remains a prisoner of his past. People now see a clear disconnect between his words and his worldview.

People are now asking – Does India really need Modi and his fundamentalist policies?

Bihar, thankfully, has answered that question.

The same question is going to be hurled at Modi in the United Kingdom, while he is on his official trip. Already there is a growing unease in Britain about Modi’s presence in their midst when “Modi not welcome” images adorn the British parliament.

India gave Modi a wonderful opportunity to repent and reform, but he seems to have frittered away people’s goodwill and historic opportunity.

The defeat in Bihar raises a bigger question – BJP’s capacity to govern India. A party which struggles to fit into the secular psyche of the nation cannot be a natural choice in the governing of India.

Modi has more than three years to go in Delhi, and the nation already seems to be regretting the choice it made in the summer of 2014.

Manini Chatterjee, of The Telegraph, aptly sums up the mood of the nation after the Bihar verdict:

“Just three words reverberated across large swathes of India today: Thank you, Bihar. Three words that expressed a quiet joy. Three words that were a sigh of relief. But most of all, three words that sadly reflected how much Prime Minister Narendra Modi had managed to disappoint and divide the country less than 18 months after his own magnificent victory”.