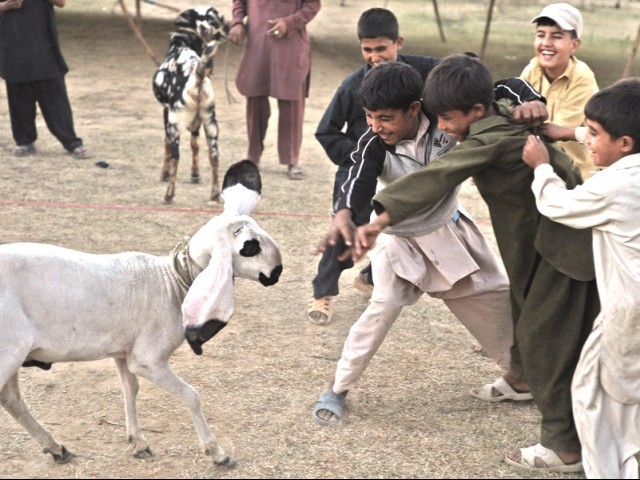 Children play with a sheep a day before Eid. Photo: AFP

Back in the days when nunna, my maternal grandmother, was alive, Bakra-Eid used to be something else. Come morning all us cousins, aunts and uncles would head to her house. The older cousins were dressed to the nines, the aunts wore kitchen friendly clothes and soon the delicious aroma of a million things cooking on the stove pushed out any sadness for sacrificed animals.

The fest started at breakfast.

Or should I say brunch?

It was served only after the sacrifice was performed. But we didn’t mind. We acted grossed out by the raw meat and put on an air of reluctance. But when the meal was finally served, no one could resist.

Phepsa laleji, spiced up and roasted to perfection, brain masala, with a special touch of soya. Heavenly parthas that tasted divine. (Maybe they were infused with something special? Garlic?) There was deep fried meat, but sinfully delicious. I have a very distinct memory of my Mami threading shreds of marinated meat together and hanging them outside to dry. Raw material for the very best fried meat you could have. After the brunch the meat was divided and packed. Someone departed with packets to distribute and the women set to making kebabs and assorted delights. The nights meant barbecues which seemed so much more fascinating because the men cooked.

I remember my Mom, mamis and khalas, together in the kitchen, cooking together gossiping about those not present. Oh! The things they would find scandalous. Someone’s son had started smoking, someone else had been caught lying and a kid was actually sleeping in until – gasp – 12 o’ clock!

The talked and laughed and cooked non-stop.

At times we were given lemons to squeeze, onions to peel and garlic to crush. But even if you had a chore, you were not welcome in the kitchen and definitely not encouraged to eavesdrop on grown up conversation. So, we kids mostly stayed out in the garden, playing Coh-Coh, Pittho, Kona-Kona and sometimes, putting on a quiz show using raw guavas with sticks in them as a the mics. We raced each other up the fig tree and jumped on the roof till someone told us to keep it down. Once a cousin was dared to jump from the roof, he wouldn’t and then someone told him he would do it if he really loved Pakistan. He jumped, landed on the grass and was miraculously uninjured.

The things we did. A lifetime ago.

Now, nunna has been gone for years and even my roof-jumping patriot cousin is no more.

Everyone has gone out in the world and has made a place for themselves, but in making that place, we’ve all moved very far from the place we belonged to. On Eid days now, I half heartedly make sheer korma and fry something from KnNs. Almost all the meat is sent directly to charity and what little is stored in the fridge is merely symbolic. I put off cooking as long as I can and end up making a pulao because “Hey, what is the point of making an effort when nobody is coming for Eid?”

The compulsory house calls of Eid’s of the lore have simply become phone calls now. I call mom and she tells me about the menu and clothes. I call cousins and laugh over the same stories we’ve laughed at a million times before. We remember the grand times we had and wonder when we’ll all gather back in Karachi again.

By mid-day the calls are over and done with.
So Eid passes, simply as an off day and not as one of the most perfect days of the year. Every year, I find myself going back to the Eids of my childhood and every year they become a little more perfect, a little more fantasy-like. I miss the company, the feeling of being young, happy and having an eternity to spend, but most of all, I miss the tradition.