Is Justin Trudeau’s cabinet as big a kick to sexism as imagined? 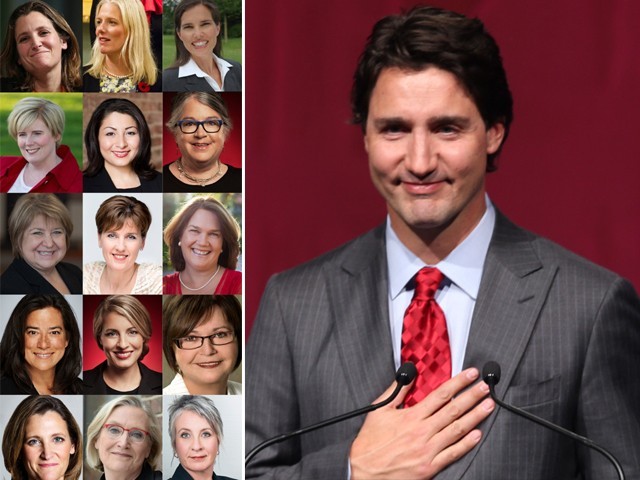 Justin Trudeau’s appointment as Canada’s new prime minister has generated an incredible response from the global community. Whether it’s his photogenic good looks, or his demeanour as the down-to-earth friend of the people, Trudeau has not only given the Canadian society a whiff of optimism, he has made headlines the world over.

As someone who apparently can do no wrong at the moment, his decision to appoint a cabinet divided equally between men and women has only added admiration for him. When asked the reason giving half of the spots within his cabinet to women, he remarked,

As someone based in Canada, I witnessed people breathing a sigh of relief when Stephen Harper’s toxic tenure came to an end. While the recent optimism and wave of positivity sweeping Canada is understandable, at the same time, it is important to look deeper into issues and not take them at face value alone – Trudeau’s cabinet appointment is one such issue.

Does having a cabinet equally divided between men and women as big an accomplishment as believed? Is it really as big a kick to sexism globally as imagined?

Trudeau is a proponent of liberal feminism, the ideology common in mainstream discussions among feminists. Liberal feminism has its merits, but it does not divulge into the root causes of sexism in society. In order to carefully examine the causes and historical impact of sexism and move into a society where women are well and truly treated as equal to men, one needs more than this – one needs socialist feminism.

Liberal feminism advocates a change in legal and political reform, in order to change and alter laws that prevent equality. While this is important, it reduces feminism as mostly representative of the middle and upper class of society. Examples in support of feminism, depending on which part of the world you come from, range from Bollywood movie stars as Priyanka Chopra being vocal about her personal choices, to Hillary Clinton attempting to become the first woman to be elected President in the United States. All well and good on the surface and gathering enough media attention to keep the ruling class satisfied, but what about the power of feminism that resonates in the working class?

The idea that equality can be achieved by promoting a few women into positions of power and educating men not to be sexist is not what will put an end to sexism. This promotes and accepts the idea that there are always going to be poor women, and more female political leaders, social workers and movie stars need to be empowered. Nothing could be further than the truth.

In order to truly eradicate the cancer of sexism, feminist movements need to rise from bottom, not from the top. More Hillary Clintons and Benazir Bhuttos will always make headlines, but if electing a woman into political office is all it takes to eradicate sexism, should one also celebrate staunch conservatives like Margaret Thatcher and Angela Merkel? If obtaining media limelight is all it takes to promote feminism, should one also celebrate the two-faced Mother Teresa?

Feminism is not about fighting for political and legal equality alone. It is about shaking the roots of society from the very core, and that is not dependant on fighting for political office, gathering media attention and tons of other capitalist smokescreens. But this is where liberal feminism, the dominant version of modern day feminism, displays the shallowness of its approach.

The true face of feminism is reflected by women such as the brilliant Syeda Ghulam Fatima and Helen Keller, and countless others who stood up not because it made sense from a media or PR perspective, but because they fought against oppression and class boundaries.

For movements to build and sustain, a class appeal to women, men, society at large is imperative. Socialist feminism explains how sexism functions as a tool of the ruling elite to maintain the oppression of the vast majority of working people, because it takes class conflict into consideration, by identifying sexism as a function of divide-and-rule under capitalism.

Justin Trudeau’s political moves, commendable on the surface, but limited upon serious reflection, need substantially more in order to fight for true liberation for women and society as a whole. Appointing a cabinet that consists of an equal number of men and women will turn heads in the media and make headlines for the moment, but this is only a drop in the vast ocean of equality, not only for women, but humanity as a whole – from the oppression of capitalism.