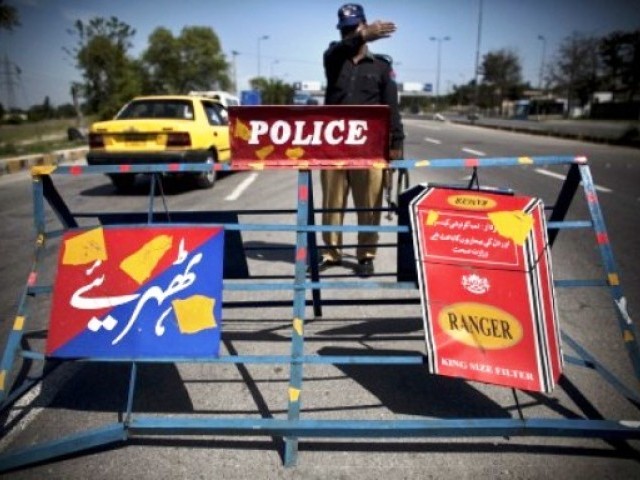 Roadblocks acts as pockets of danger in all our major cities.

“We are standing in a field of a hundred bombs.”

One of my colleagues has a penchant for dramatic statements, but this time he was not exaggerating. Having recently returned from a visit to Afghanistan, he was in a position to talk about what constitutes a security hazard.

A hundred cars packed snugly into the space before a road-block, with most engines running on CNG, is not merely a question of inconvenience. It is a disaster waiting for ignition.

It should be self-evident that the elements seeking to strike terror look for maximum impact, given their resources. Shrines, mosques and market-places are targeted for their dense concentration of people. International organisations are vulnerable because foreigners get more coverage in the foreign press than local blood. The attack on the CID building in Karachi was a powerful statement at several levels in terms of the sheer scale of damage, strategic location and the creation of a palpable sense of chaos. The one thing that is certain is that no place is safe.

Why are we wilfully creating pockets of danger in our major cities?

Whether it is Lahore, Karachi, Islamabad or Peshawar, traffic jams at checkpoints are now a universal phenomenon. What is not being addressed is the fact that the successive lines of gas cylinders are too easy a target for those seeking to make a statement, while employing minimal resources. It is ironic that the apparent trade-off is between increased security and increased vulnerability.

As far as monitoring is concerned, it makes sense to have a system in place when entering parks, hotels or large public compounds. There is an element of pre-emption when it comes to stationing sniffer dogs or security personnel at strategic points of entry, for instance on the route from Pindi to Islamabad. However, it is difficult to fathom the utility of having road-blocks randomly strewn across the urban landscape, with bored personnel peering disconsolately into cars before waving them on.

It is unfair to hold the sentinels at fault – they are simply doing their job and often have to face wry looks and verbal abuse in the bargain. They hold fort at their respective checkpoints, come sun or cold or rain or night. In terms of actual prevention, they appear to achieve little but a higher level of road rage for tardy employees. In terms of morale, they only augment the feeling of latent insecurity in the general public. They stand as constant reminders that the character of the city has changed; that sporadic violence has been woven into the fabric; that all is not well in the state of Pakistan.

While the likes of the Tehreek-i-Taliban Pakistan grow ever bolder, there is considerable pressure on the authorities to appear to be taking action. The weary faces behind the checkpoints are perhaps meant to be a symbol of reassurance that a system of prevention is in place, and the state exerts some control over the movement of people and goods within the cities. The trouble is that explosives and ammunition are not generally exhibited in the front seats of vehicles.

There are certain principles rooted in common sense that can be applied to states which are susceptible to terror and violence, be it Pakistan or Afghanistan. One of these is that the movement of material can and should be monitored at the borders, but there should be no ill-conceived roadblocks in a war zone. Often, all that is created by an obstacle course during rush hour is dangerously combustible congestion.