Shoaib Malik’s Test retirement is anything but ‘graceful’ 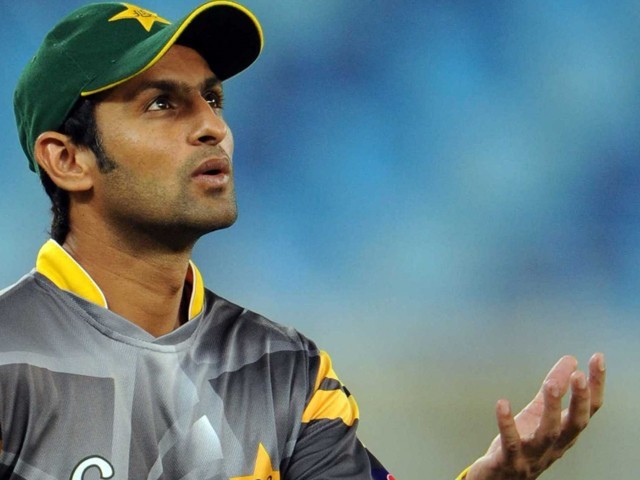 His total ended up being 245 – a career best – and he also contributed with the ball, taking four wickets in the match. PHOTO: AFP

Pakistan all-rounder Shoaib Malik, who was recently recalled to the Test side after a gap of more than five years, has announced his retirement from the longest format of the game following the conclusion of his comeback series against England in the UAE.

Malik, who was not part of the team as a first choice, was drafted at the side as a replacement for the injured batsman, Azhar Ali. He was included in the playing 11 for the first game and with a bit of luck, went onto score a double century. His total ended up being 245 – a career best – and he also contributed with the ball, taking four wickets in the match.

His return could have been sweeter had Pakistan gone onto winning the match instead of it being a draw. But it was England that came close to securing an unbelievable 1-0 lead after dismissing Pakistan for mere 173 runs on the final day, and chasing down 99 runs in the handful of overs left in the match. Bad light came to the rescue of Pakistan and the rest is history.

Following his heroic return to the Test side, Malik’s scores were zero, two, seven, 38 and zero. Experts such as Ramiz Raja and David Lloyd began questioning his technique and place in the side by the end of the second match, but he was given another chance in Sharjah, after which he decided to call it quits in the longest format of the game and focus on limited-over cricket.

Soon after the decision was made public, Malik’s fans started praising him and went as far as saying that Malik was the epitome of a cricketer retiring ‘gracefully’ when he does not find himself suitable for a particular format.

In reality, there was no choice for the 33-year-old but to quit and if he had so much grace, he would have retired from all forms of cricket when he continued international cricket for five straight years without scoring even a single half-century.

So why did he quit Test cricket then?

The answer is very simple – lack of fitness, motivation and of course, he was never made for the real deal. After his knock of 245 in Abu Dhabi, Malik was not able to physically cope with the challenges of Test cricket. Even during his innings, he was seen struggling and could barely walk despite the weather being pleasant in the UAE.

Malik hopes he can extend his limited-over career until the 2019 World Cup, but he would have retired ‘gracefully’ by then. Furthermore, Pakistan has got some international tours scheduled in the year ahead, which will expose his poor technique even further and his ‘blind’ followers will once again go into oblivion.

The author has vast experience in content writing and editing. Currently, he is based in the UAE and works in the healthcare industry. His hobbies are playing cricket, tennis, swimming and watching Formula 1. He tweets as @WaqarMasood (twitter.com/WaqarMasood)