Dear Imran Khan, your inconsistent stance on your personal life is confusing 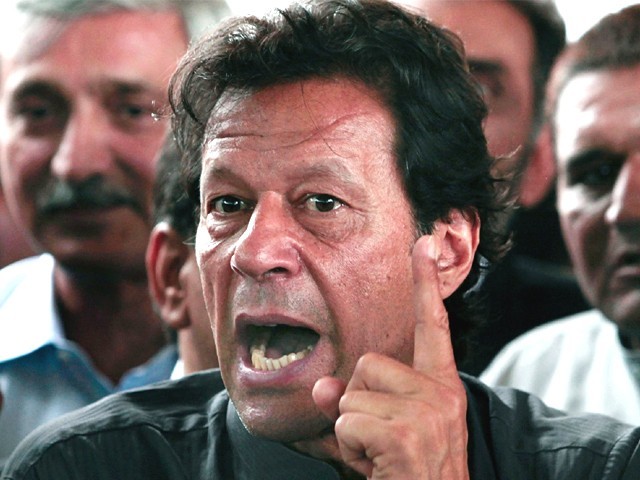 Let me start by offering my sincerest sympathies on the tragic end of your relationship with Reham Khan. I have, since I was a boy, held admiration for your achievements, and have read all books written by you, and therefore know how dearly you hold the institution of marriage, and how earnestly you wish for such a partnership to succeed. I also realise that you were hurt by the sad end of your first marriage, and must have entered your second one with every intention for it to succeed.

These things considered; the differences between you and Reham must have been vast and irreconcilable for the two of you to end the partnership only after ten months.

It is understandable for you to seek privacy so as to find the space to grieve and heal from this heartbreak, yet the way you recently tore down a journalist for inquiring about your marriage was disconcerting.

Do politicians have a right to privacy? Yes, well, of course they do, unless their private lives reflect poorly on their ability to perform public duties.

Let’s take for example your many jibes on the current Prime Minister, Nawaz Sharif, whom you have called out time and again publically for unscrupulous business practices. Sharif would not be able to realistically ask for privacy on his personal business decisions since those choices speak ill of him as a leader.

Likewise, a reporter has every right to question you on why your marriage ended so swiftly, as it speaks poorly of your decision making, especially in light of the disturbing rumours surrounding the demise of your second marriage. Normally, one wouldn’t pay heed to such gossip, except it comes from the same source, journalist Arif Nizami, who has been proven to be accurate twice so far on your affairs.

Although many of the allegations such as domestic abuse, financial payoffs, and slow poisoning come across as ludicrous, they are serious enough for any reporter to want to investigate further, as it involves you, a powerful political leader. Your party has claimed that these allegations are false, but your track record makes it difficult to separate fact from fiction.

This brings me to your repeated appeals for privacy. It pains me to say this Mr Khan, but over the years you have used ‘privacy’ as a cover, though only when it suits you.

Let’s look at this interview of you from when you were at the age of 38. Here, you invite a British reporter to your home to discuss your love life. As the reporter asks you about one girlfriend after another, you chuckle with the glee of a schoolboy, only stopping him to mention that these women are now married.

Mr Khan, clearly, you felt no need for privacy then, not for yourself, not for the happily married women you were discussing. I wonder how they or their spouses felt to see an ex-boyfriend discuss them like mere conquests.

Roles reversed, would you have found it pleasant to see your spouse’s former lover discussing her on television with such juvenile mirth? Is privacy only of value to you when it shields your own life?

The most cringe worthy quote of yours came towards the end,

This interview bothers me because when a Pakistani reporter asks you questions about your recently concluded relationship, you disgrace him publically, yet when a British reporter inquired about your conquests, you were more than eager to entertain him. Is this not a double standard?

But your track record on privacy has always been inconsistent.

Take for example the case of your alleged daughter, Tyrian. Any discussion on her has been repeatedly shot down by you and people from your camp with claims that it is a private matter.

As I now realise, this may simply have been a clever way to shield your public image.

Let’s look at the facts. Millionairess Sita White claimed that you fathered a daughter with her named Tyrian.

When you let her down, White went public,

“I am only here because I have been publically challenged by Imran Khan’s statements to the press, which appear to allege that he is not the father of my daughter, and that I should go to the courts to prove he is not the father. This entire situation is deeply painful and sadly disappointing for me. Since my child’s birth four and a half years ago, my past conversations with Imran allowed me to trust his words that in time he would personally acknowledge to our daughter who her biological father is, and why he couldn’t be in personal contact with her all of these years. I have never asked for anything from Imran. Now, I ask only for the truth and the rights of my daughter, which she is entitled to enjoy.”

White never saw you publically acknowledge Tyrian, and in 2004 died of a heart attack.

But before she passed away, she took you to court in the United States. She did not demand any money, only recognition for her daughter. If you were innocent, why did you not show up for a paternity test?

After you failed to provide a simple blood sample, the court ruled that you are Tyrian’s father.

Shockingly, your defense team tried to make White seem like she had been manipulated,

“We believe the complaint, as originally filed, was ill-motivated. We believe the mother may have been the unwitting tool of my client’s opponents.”

On the other hand, White’s lawyer, Gloria Allred, was very clear,

“White got pregnant and Khan told her he hoped it was a boy. When he learnt the baby would be a girl, Khan expressed disappointment and said the child would not be able to play cricket. He urged White to have an abortion, but she refused.”

All White wanted, according to Allred, was justice for her child,

“We did not request child support. We hope that, one day, he will open his heart to his little daughter and give her the love, respect and support every little girl deserves.”

Mr Khan, your own writing partner, biographer Ivo Tennant was convinced of the truth,

“In May 2004, one of those old girlfriends, the millionairess Sita White, died suddenly of a heart attack. Her daughter Tyrian was proven to be Imran Khan’s child in 1997. Imran denied he had fathered the little girl until a legal suit proved otherwise. He did not meet Tyrian until she was six-years-old.”

Meanwhile, according to your favourite channel ARY, your sons took pictures with Tyrian. These pictures were found floating on Twitter.

Let's RT thousand times to salute @Jemima_Khan 4 owning Tyrine Imran and giving her the status of her daughter pic.twitter.com/SyI5nZLauv

Here is another picture of her with your ex-wife, Jemima.

Today, Mr Khan, during interviews you do not deny fathering Tyrian. You hypothetically state that if you made a mistake in your past, it doesn’t harm anyone in the public, and should not be explored by journalists as it is a private matter.

This, sir, is fair enough. For all we know, you privately give Tyrian the love and validation she deserves now.

But where I disagree with you is that it is a private matter which doesn’t affect the public. Does Pakistan not deserve to know if a leader preaching hardline Islamic values acted differently in his own private life?

If Tyrian is truly your daughter, then Sita White was mistreated, for which there is no justification. If she was made out to be a liar so you could protect your political career, then it is very shameful indeed.

You claim to be a born again Muslim, and a changed man. To maintain this image, you only allow the public to consume your religious persona, even though it contrasts sharply with your private life. Granted, Pakistani media often crosses the line, but do reporters not have a right to ask questions of a man caught sidestepping the truth with such regularity? Our worst fear is that you are once again trying to bury your flaws under the guise of privacy.

Who are you really, Mr Khan? If you want to lead us, then we deserve to know.