Fashion Week: A prototype of resilience to terror 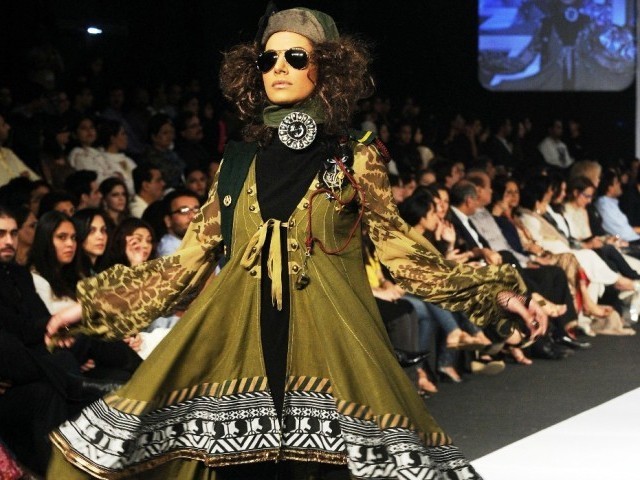 Pakistan Fashion Design Council (PFDC) Sunsilk Fashion Week has been a success. From Maria B’s clichéd yet imposing collection ‘Tribal Militants’ to Feeha Jamshed’s commendable attempt at paying homage to 40 years of the Teejays trademark, the show is a shimmering example of the surfeit of talent that exists in our fashion industry.

But under the circumstances in which it was conducted, it serves to demonstrate the nation’s resilience against political violence.

Ironically so, it is this very resilience that has been spurned upon. There is a section of society which believes that in the event of the suicide attacks in Karachi on Thursday night, the fashion extravaganza should have been postponed – or, as a more extreme measure, cancelled.But it is still unclear as to what could have been achieved through such a postponement.

Can we postpone culture?

I reckon it would have been construed as a means of heightening sympathy for those who were killed in the catastrophic bombing. Or perhaps, the volatility of the situation could have been better understood. However, it is integral to note that these serve as vague justifications for the apathy shown towards anything that draws upon Pakistan’s creative potential.

Over the last few days, I have come across numerous articles that have lauded the effort put into the PFDC Sunsilk Fashion Week. But the feedback they have received has either been favorable or regrettably absurd. There is at least one ridiculous post on the comments section of nearly every one of these pieces that has criticised the PFDC for its indifference towards Pakistan’s fragile political situation.

An elitist venture or another face?

This not only highlights the bigoted nature of the Pakistani mindset that continues to deride fashion as an elitist venture but also shows our blatant lack of common sense. After all, why should the PFDC be concerned about politics? It is neither something that falls into their jurisdiction of responsibilities nor something that should act as deterrence to its own priorities.

Political literacy is integral and a sensitive attitude towards the nation’s problems is requisite to solving them. But under no circumstance should organisations geared to improving our image in the global context be blamed in individual capacity for an indifference that is more noticeable in our government’s agenda.

This deplorable state needs to be tackled with resilience. No blame game can extinguish the multifaceted problems unless it is used to pursue composite dialogues that could potentially resolve them.

Therefore, it is essential to speak well of those who are trying to create a climate for social progress by not succumbing to pressures from militant elements. And if one has reservations about political issues, they should either be addressed to those who actually have the ability to redress them or remedied in the context of self-help schemes. It is then that we will become as resilient to the day-to-day issues that ail Pakistan as the PFDC has proved itself to be.