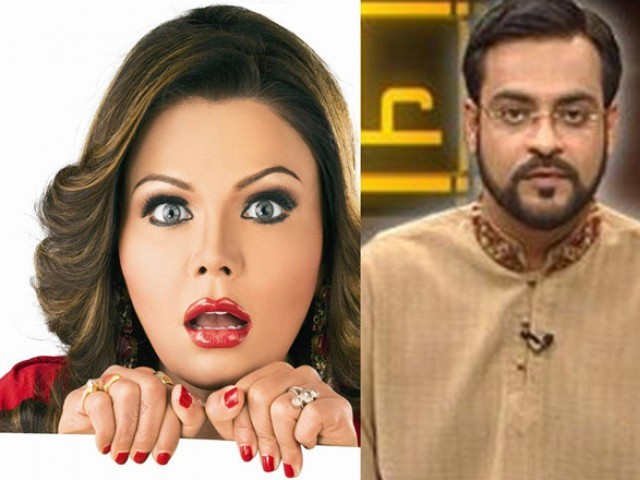 Both Rakhi Sawant and Aamir Liaquat Hussain are given to hectoring, spewing venom and passing arbitrary judgements.

What do Rakhi Sawant and Aamir Liaquat Hussain have in common?

Both are given to hectoring, passing arbitrary judgements and being shameless to the core.

Perhaps the only difference between the two is that while the holier than thou TV anchor uses the religion card to ensnare the indiscreet and undiscerning viewer, the brassy Rakhi Sawant resorts to shock and awe tactics.

Now, both have another point of similarity: murder allegations.

With this Bollywood item girl’s messy track record, it is indeed surprising that NDTV thought it appropriate to hand her a reality show on a platter. Rakhi is seen in the role of a judge who arbitrates disputes of domestic violence and marital discord. Having Rakhi Sawant as a judge seems somewhat akin to handing OBL the nuclear trigger.

True to form, within a month of going on air, her reality show has been mired in murder allegations. Lucknow’s Laksham Prasad and his wife Vineeta appeared on “Rakhi Ka Insaaf” in October, with Vineeta alleging that her husband allowed his uncle to harass her. Prasad was upset after Rakhi Sawant termed him “impotent” on the show.

The 24-year-old Prasad died on Wednesday, and his family alleges that it was because of Sawant’s televised remarks while trying to settle the dispute between him and his wife. “My son was so upset with the indecent remarks that he stopped meeting any outsiders or neighbours, who used to laugh at him referring to the remarks by Rakhi Sawant. They had seen the show and how that girl referred to my son,’’ said his mother. “He started suffering from acute depression and even stopped eating. He gradually became weak and frail and died. No one other than Rakhi Sawant is responsible for the untimely death of my son.”

Prasad’s family members have registered a case against Rakhi Sawant. She has now been charged on three counts and is facing imprisonment if the court finds her guilty. Notwithstanding the merits or demerits of this particular case, it begs the question that doesn’t great power come with great responsibility? The electronic media in our part of the world enjoys greater freedom now than ever before, but whither their sense of professionalism or ethics? Whatever happened to the concepts of neutrality and objectivity which should be the cornerstone of any anchor, whether dealing with a reality show or a religious programme? Who gave the media the right to sit in judgement on others and dispense warped justice as they see fit?

Is Rakhi Sawant to blame for this suicide or the villagers who teased and tormented the man? Undoubtedly, their taunts were directly influenced by Rakhi’s programme which only serves to illustrate the great influence exerted over the hearts and minds of television viewers. Closer to home, we have the example of the Aamir Liaquat Hussain, former host of Aalim Online. On  September 7, 2009, Aamir Liaquat declared in his programme that killing members of the Ahmadi community was justified calling it ‘Wajib ul Qatal.’

Eighteen hours after the broadcast, on September 8, six persons entered the Fazle Umer Clinic in Mirpurkhas and shot Dr Abdul Manan Siddiqui 11 times. The killers remained at the hospital until the doctor was declared dead, then they walked out of the building’s front entrance. Police registered the killers as unknown. On September 9, forty-eight hours after the broadcast, Mr Yousaf, a 75-year-old rice trader and district chief of the Ahmadi sect, was shot and killed by motorcycle assailants on his way to prayer in Nawabshah. No one was arrested. Thus, two Ahmadis were murdered within two days of the telecast the programme.

Not only were there no legal repercussions for the anchor, he was allowed to continue his programme as well. Sadly, this was not the only time that Aamir Liaquat made questionable statements on TV. Earlier, he had also condemned the British author Salman Rushdie and said that he should be “killed for blaspheming the Holy Prophet (PBUH) in his book, Satanic Verses”.

Then, we have the example of the trendy singer turned preppy designer turned enthusiastic televangelist, Junaid Jamshed, who invited the luminary Maulana Tariq Jameel on his TV programme ‘Hayya al Falah’ to enlighten us as to the real reason behind the devastating floods in Pakistan.

Asked about the flash floods, the learned Maulana cited a verse from the Quran that meant fasad, either on earth or oceans, was of man’s own making. Another verse quoted suggested that a disaster befalling human beings was caused by their own actions. According to this interpretation, Allah when pleased allows rains to fall on time and when angry, withholds the rain. Maulana Tariq Jameel went on to blame the rulers for bringing into play God’s wrath. Hence, we sinners were advised to beg god’s forgiveness. No mention was made of relief work or the gargantuan scale of the humanitarian disaster facing our fellow citizens or the need to give generously. Far, far better to invoke visions of God’s fury to a beaming and approving Junaid Jamshed in his avatar as a Maulana.

After the ratings – the viewers’ role

What kind of a message does such an unrestrained and dangerous spiel send to the viewers of a country with an abysmally low literacy rate? Why can’t there be a code of ethics for the media which could monitor such programmes? One has to only look at the level of discourse in talk shows to see what prime time TV has been reduced to. Almost invariably, it is the TV anchors who encourage such misbehaviour and abandon moderation to sit complacently as guests bicker and almost come to fisticuffs. The esteemed Pakistan Electronic Media Regulatory Authority (Pemra) appears to be hand in glove with the media mandarins since it is clearly uninterested in enforcing any code of ethics. Most media channels are manned by seths and charlatans who are willing to turn a blind eye to such a flagrant abuse of media ethics as long as their television ratings remain high.

But in the final analysis, it has to be said that we viewers also share some of the blame for this pathetic state of affairs. If the media is supposed to hold up a mirror to our society, why is the reflection so increasingly unpalatable? Does this bigotry, arrogance and desire for instant gratification not reflect what we have been reduced to? As long as television viewers are willing to subscribe to such vitriol, there will be more and more Rakhi Sawants and Aamir Liaquats and their legions of crazed followers who can go to any lengths to follow their Master’s voice.