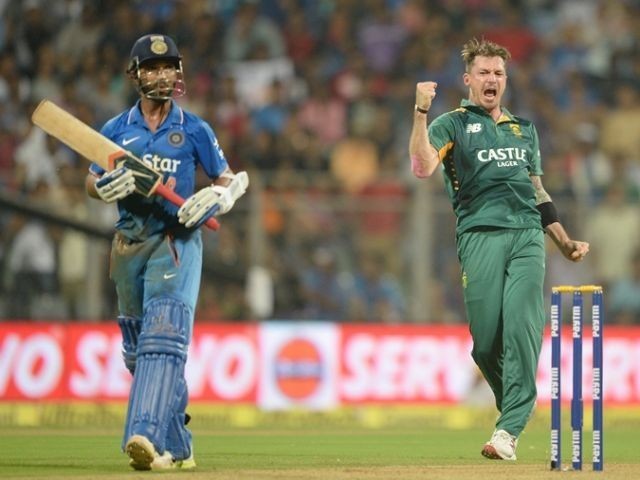 A historic series win and players oozing with confidence marked the interesting battle between two heavyweights, South Africa versus India. The visitors, South Africa, were brilliant in all departments. This was evident through their victory in both the formats. They managed to produce some brilliant moments over the past 25 days and key players from both teams played pivotal roles in providing spectacular performances for their respective teams.

During the ODI series decider at Wankhede, the Proteas put up a one-sided show after Indian bowlers literally threw runs their way. It’s India’s second straight bilateral defeat, after losing to Bangladesh earlier this year.

Toying with bowlers, the left-handed opening batsman Quinton de Kock, who could be seen enjoying the Indian bowling attack, had scored his second century in India and fifth century overall against India out of his eight tons. With a strike rate of 134.59, Ab de Villiers is the highest run-scorer in this series, who finished with 358 runs. Young-blooded Kagiso Rabada and the fierce Dale Steyn finished with 10 wickets a piece in this series. But it’s Rabada who held his nerve and performed better than Steyn overall. India’s strike rate marked the depth in the Proteas bowling line-up.

With the upcoming Test series, the following five players should be kept an eye on. These players are capable of delivering tons with their fluent batting and outstanding bowling spells during any point in time during the four Test matches. This will be the real test for bowlers and batsmen from both teams, but currently, South Africa seems confident in tackling the nuclear head of spin after their series win.

This classy modern-day young Indian Test captain is an aggressive breed of batsmen who has been hailed for leadership qualities and India’s historic triumph in the Test series against Sri Lanka. It was India’s first series win on Lankan soil after a whopping 22 years.

Kohli, who seems to improve with each game and has the ability to demolish the best of bowling line-ups when he is at his best, will be playing his first Test on home ground as a captain. His way of playing is unique and currently, he is in the best form.

At the age of 27, Kohli has scored 23 ODI centuries against all-Test playing nations, which shows the calibre of this player. He is the anchor man in the Indian batting middle-order and he can ball as a part-timer. His batting during this Test series will be interesting, since everyone will be keen on seeing how he’s going to put up against the intense bowling line-up of South Africa. After all, Test is extremely different from ODIs. Kohli has played 37 Test matches and in 66 innings, he has scored 2,794 runs at an average of 45.o6.

Hashim Amla, the Test captain for South Africa, shoulders this great responsibility by bringing calmness to the bench with his batting prowess and immense concentration on field. Amla who made his Test debut in 2004 at Eden Garden, Kolkata, against India, is known for his consistency and delicacy. Though he has not performed his best with the bat during this particular series, but he is the fastest batsmen to reach 6,000 ODI runs and it seems like he wants to go after the Indian bowling line-up in the upcoming Test series.

Amla has played 84 Tests and in his 144 innings, he has scored 6,770 runs at an average of 52.48, with 23 centuries and 28 fifties to his name. He has scored excellent centuries against India in India. Amla is a huge asset for South Africa and a huge threat for India.

This versatile character, with pure pace and elasticity in his movements, is the most promising prospect in all formats for South Africa. Apart from this, he is the most feared bowling spearhead. He is known for his accuracy and lethal pace, which could rattle the top order in no time. His strength lies in the fact that he bowls to the right areas. In his 149 Test innings, he has taken 402 wickets at an average of 22.48, with an economy of 3.24. His statistics are brilliant, four for 24, five for 25 and 10 for five over a span of 80 Test matches. In the previous series against India, his best bowling figures in the Tests format came against India at Nagpur when he took seven for 51 in 2010 in the first Test. Steyn had picked up 11 wickets in the two Tests against India.

With a steady head on his shoulders, this opener, whose fitness has bothered bowlers, has toiled hard to master the art of batting and always manages to find a reason to play on Asian pitches. I feel he would be the right man for the South African spin attack. Pujara boasts of a whooping average of 80 in Asian conditions. He had scored a fine century against Sri Lanka to register his effective comeback.

The premiere Indian off-spinner, Ashwin, who had suffered a side strain while fielding in first ODI was a great loss for India in the vital ODI series. Ashwin took nine wickets in his maiden Test against West Indies in 2011 and he is confident in his skin and seems to be improving. Fortunately for India, it seems he will be playing in the first Test at Mohali, where spinners will most probably steal the show. He is a treat to watch with several tricks in his armoury, like a soduku ball. The opener-turned-offie would clearly be the most important threat for South African batters in this Test series.

The birth of widows in conflict ridden Kashmir

Bhand-e-Pather, a fading art in Kashmir