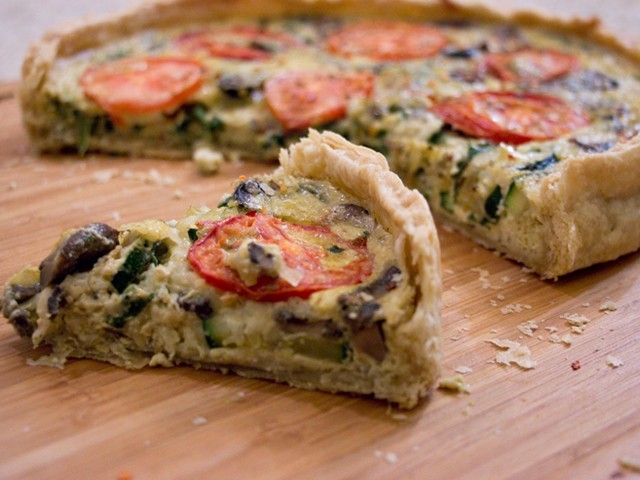 Season the vegetables really well and make sure that the pie crust is your best artwork. PHOTO: IZZAH KHAN

I love an omelette that is fluffy and loaded with vegetables and cheese. Hence, this quiche makes for a pretty fancy breakfast. It is one gorgeous looking omelette nestled in the flakiest pie crust. It’s cheesy, creamy and has that perfect buttery crunch of the crust. If you want to make it a legit pizza quiche, go ahead and toss the vegetables in some pizza sauce. I like to leave that out. I do like sprinkling in some dried oregano for the familiar aroma of pizza. Season the vegetables really well and make sure that the pie crust is your best artwork!

I once gave a slice to the security guard at my apartment. When I went to get my plate back, he said,

“Oh my god! This was delicious, you are such a good cook.”

Try serving this dish as soon as it comes out of the oven with a dash of hot sauce (so delicious and a must!) because the pie crust does not like being stood up! The quiche is getting a bad rep because it’s not served fresh, and often the crust is soggy, and reheated way too many times.

You can of course nuke a cold quiche in the microwave for 20 seconds and it will still taste pretty delicious. But if you’re making this or any other quiche for a brunch, you must serve it fresh!

If you’re a fan of quiche, you will love this!

1. In a mixing bowl, whisk together flour and salt. Do not cut butter into the flour; I like to grate really cold butter on the largest holes of the grater, so it distributes evenly in the flour.

3. Slowly add water, a tablespoon at a time into the flour mixture. Mix with hand. Once the dough pinches together and forms a ball, stop adding water. (Less is more in this case.)

4. Wrap in a cling film and refrigerate for half an hour, for up to two days.

5. When ready to make pie crust, roll out the pie dough on a marble top or cutting board. It’s fine if the dough gets crumbly. Although when I made it, it did not because I used really cold ingredients (that’s the key).

6. Roll it out to about ¼ inch thick and press it in your quiche pan. A regular spring form pan is perfect too.

7. Crimp the edges and prick the dough with a fork. Bake for around 15 minutes at 400 degree Fahrenheit.

8. Once your pie crust has baked until slightly golden brown, brush it with egg white. Let it dry for about a minute or two. This will prevent the crust from getting soggy from the filling as it bakes.

1. Melt a knob of butter along with some olive oil in a pan. Add garlic and sautéed until fragrant.

2. Toss in mushrooms and sautéed until soft. Add zucchini followed by spinach and jalapeno peppers. Sprinkle salt and oregano. Cook until the spinach is wilted. Then remove from the stove.

3. In a large bowl, add eggs, milk, salt and paprika and whisk until beaten. Add the grated mozzarella cheese followed by your sautéed vegetables. Mix the filling together.

4. Finally pour the filling into the prebaked pie crust and bake for 10 minutes at 375 degrees Fahrenheit. Top with olives, more cheese and tomatoes. Sprinkle some dried oregano. Now continue baking for 15 to 20 minute more or until the eggs have just set in the centre. A little jiggle in the centre is fine, but a knife inserted should come out clean.

If you’re more into visuals, check out how I make this:

All photos by Izzah Khan

The author is a food enthusiast and recipe developer. When she is not at her day job crunching numbers, she makes cooking videos in her apartment in Los Angeles and blogs at rookiewithacookie.com

I’m not bragging, but this is one unforgettable chocolate cream pie

Embrace the spirit of barbeque with some appetising Pakistani seekh kebabs