Earthquake 200(1)5: Are Pakistanis mobilised best when calamities are of colossal magnitudes? 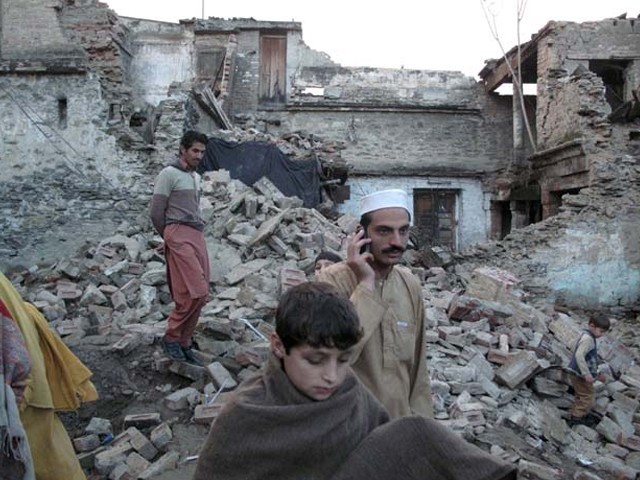 Residents walk past the rubble of a house after it was damaged by an earthquake in Mingora, Swat. PHOTO: REUTERS

A 100 plus schools and almost 9,000 houses have been demolished in Khyber-Pakhtunkhwa (K-P) alone, and even official figures show that the death toll is bordering on 300 people.

Calculating the number of the injured and incapacitated is not difficult to calculate. The earthquake that shook Pakistan on October 26th was not a small calamity by any means. Yet, apart from sporadic sightings of a couple of relief camps, Pakistanis are not mobilised like they were at the time of natural calamities that hit the country in the past.

The initial wave of sympathy seems to have dissipated sooner than usual. The very nation which prides itself on being charitable and unified in times of crises seems to be sitting tight on the whole, barring some exceptions.

What went wrong this time? Or did something go right?

The first reason is a no brainer. Fortunately, the numbers of casualties and people affected are much lower, though each life is precious. Comparing 80,000 deaths and 3.5 million homeless in the 2005 earthquake, and the 2,000 deaths and 20 million affected in the 2010 floods, the numbers this time are drastically less impactful. It seems, thus, that Pakistanis are mobilised best when calamities are of gargantuan proportions. The flip side of the fact that we are a nation that is resilient is that it requires something enormous to move us.

While during the 2005 earthquake Pervez Musharraf was at the helm of affairs, there was a general despondency when it came to reliance on the government, perhaps due to a merger of a leader from the armed forces into the political realm. But in all fairness, the government of the time would have tried its best to mobilise relief and rehabilitation work, yet the tragedy was too huge to grapple with, and the people of every age and from every walk of life stepped up. We saw unification like never before, and Pakistanis were at their effective best.

Comparing the scenario at the time of the 2010 floods and now, one difference is key and glares back at you. In 2010, it was Asif Ali Zardari at centre stage. While it was a democratically elected government, it was practically non-existent in terms of governance. Nothing moved Zardari and the gang it seemed, and he refused to show up even for face saving. Thus, images of the homeless, starving people standing up to their midriffs in the stagnating  flood waters, fighting water borne diseases, and people wailing and crying after their children and cattle were swept away, moved the people. The collective sentiment was that it was time that matters were taken into our own hands. ‘Abb khud kuch karna paray ga’ (now we will have to do something ourselves) was the general feeling.

The 2005 earthquake and the 2010 floods resulted in the creation of scores of small non-profit initiatives on both individual and collective levels. Many of the philanthropic organisations that were created back then are still working on ground to help those affected by the 2015 earthquake.

The times have changed, somewhat. Social media is much more mainstream than it was, and even the media as a whole does not fail to put the spotlight on any bit of news, which means the leaders have to show up or they will not be forgiven. Hence, giving credit where due, no one has really been missing in action. Prime Minister Nawaz Sharif has flown back from UK cutting short his trip. Imran Khan, as Chairman of the party that rules K-P, which is the most affected province, has reached.

Both the provincial and federal governments are showing up. Most of all, the armed forces are active as usual in the relief work as well, and the people, willingly or unconsciously, rely on them to take charge of the situation. Thus, while the sympathy is there, the urgency to help is missing, and a sort of complacency has set in.

But the fact remains that this is a country where the infrastructure in the mountainous northern areas is already precariously weak. Our public health facilities are not reliable enough. Winter has set in and as a result of that earthquake, thousands are out in the open in the freezing cold weather, homeless and devastated. Ownership must be taken today as well, irrespective of what the government or the armed forces are doing or not to help the helpless.