Pakistan is a cesspool of humanitarian crises, but who cares? Imran and Reham just got divorced! 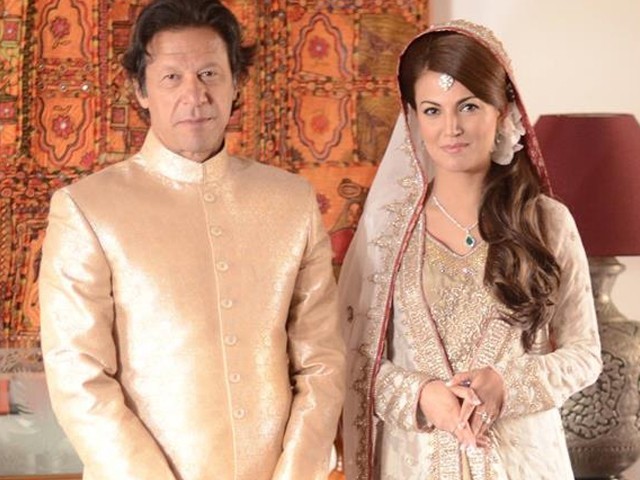 Prime Minister Nawaz Sharif has asked his party members to refrain from commenting about Reham and Imran’s split. PHOTO: AFP

Imran Khan is in the news again. He has definitely got the knack for it. Even those who are staunchly against him, people like me who are not Pakistan Tehreek-e-Insaaf (PTI) supporters in any way, turn around to listen when he’s going on and on about something. Whether it’s about “teen halqe” or even his madcap rants atop the container, the man can pull crowds.

A lot of it has to do with the fact that my generation, those of us who were all young and starry-eyed when he lifted the 1992 cricket World Cup, grew up with the idea of him being an idol, a man with charisma, someone who was a national hero.

Pakistani politics does strange things to people. Friendships are lost and feuds are ignited. Shots are fired and verbal warfare is not where, unfortunately, this ends. Guns and the violence become the highest form of political strife.

There is, however, one more way to hurt your opponent: attack his or her personal life.

A few short months ago, Imran Khan was in the news for his marriage to Reham Khan. Journalists and social media went berserk. The PTI head honcho, fresh from bidding the dharna goodbye, had tied the knot with television anchor Reham Khan. Reham, beautiful and clearly well-spoken, and Imran celebrated their wedding in a small, intimate gathering at Imran’s Bani Gala residence. Every PTI opponent devoured this news with relish. Some people, even within PTI, began to hate Reham Khan. Perhaps they were expecting Imran Khan to remain a bachelor all his life? I don’t know what could have possibly been the end game on that logic.

But one thing was most common: misogyny.

There came a point when it almost became mathematical. If you want to check the calibre of a person’s mental acumen and character, see how s/he feels about a woman in the public eye. Reham Khan was slut-shamed for her clothes and mocked for her weather-reporting days at BBC. Pictures of her dancing, wearing western clothing were splattered all over the profiles and pages of PTI dissidents and anti-Reham factions.

Then there were those who refused to acknowledge Reham’s legitimacy as her own person. Granted she came into limelight the most as Imran Khan’s wife, but her own personality seemed to hold no value at all.

The slander campaigns were not the end of the sad misogynistic trend that became a part of the celebrity marriage. Reham’s ex-husband featured more than once or twice in newspapers here or there, saying that her claims of abuse and lack of financial support were false.

Then there was the degree fiasco. The media gorged on Reham and she could do little to placate the hungry monsters.

Reham became an ambassador for street children, she tried to campaign for PTI in the Haripur elections (which PTI lost) and was subsequently told to refrain from taking part in politics. From her programs, her addresses to the audiences, it seemed Reham was an eloquent speaker, an intelligent conversationalist.

She could have been a powerful asset for the PTI which lacked any charisma except for the little that an ageing Khan offered. While Jahangir Tareen and Shah Mahmood Qureshi were strong forerunners, Reham could have easily raced past them in her public support. There was a clear lack of female leaders and with a gradual progressive middle-class in Pakistan, PTI could have easily tapped a vote bank that all other parties lacked.

Reham could have been a contender. Boy, would that have been something worth watching!

Arif Nizami, the journalist who claimed to know about Imran and Reham’s marriage before it was announced, “broke” the news of their divorce as well. The man seemingly had a source deep within the personal and private affairs in Bani Gala. Many media persons defended Nizami’s (and other broadcasts of Khan’s personal life) as kosher.

Nizami, regarding the divorce, went on to claim that the divorce was due to Imran Khan’s sisters’ discontent with the marriage. He also stated that Imran was a good man and was ‘ensnared’ by Reham’s ploys.

“She had made his life miserable!”

Then there were these gems:

It is better to sell yourself at OLX , you are of No use now ! #RehamKhan

Imran gave his best but she didn't deserve Imran #RehamKhan

It is a moment of shame, for even the educated, when literate PTI supporters, and non-supporters alike, consider Imran to be absolved of all responsibility of making the marriage work – and place the blame squarely on Reham’s shoulders.

(And he continued defending said position,)

So many took it the wrong way. A lost opportunity to help millions is sad. That's all.

Some of the PTI spokespeople have not helped the matter. Instead of understanding the real problem behind discussing family matters in the blatant, one-sided way that they are, the problem somehow has become about marriages and the number of marriages:

But, to be honest, our esteemed journalists have been the ones who have set the worst example. They proudly discussed family relationships between Imran-Reham-Reham’s Ex-Imran’s Sisters’. They left all of Pakistan’s issues on the back burner for the day.

#RehamKhan hasn't left so Easily to Birmingham … Deal was Done & She has got What She want & Then went : #TalatHussain

Any divorce is painful. And one feels for the children most. Yet #Reham has herself to blame. Her antics were devoid of dignity and grace

Journalists and media personnel are justifying their deplorable actions by saying,

“Well, if he didn’t want us to comment, why did he tell us about the marriage?”

I think we are all at that jaded point in our lives as Pakistanis, where lack of media ethics does not surprise us anymore, but just for the heck of it, this is what journalistic ethics regarding private lives are about:

“Information on the private life of a person may be published only if the behaviour of this person in the private sphere affects the public interest. In such cases it is necessary to make sure that such publication will not violate the interests of the third parties.”

Prime Minister Nawaz Sharif has asked his party members to refrain from commenting about Reham and Imran’s split. But for how long will this silence stay? Sooner or later, some member of some party, PML-N or other, is going to come out guns blazing with the kind of logic that they had about his marriage with Jemima Khan,

“You couldn’t save your marriage, how could you save this country?”

The problem is not about Pakistan Electronic Media Regulatory Authority (PEMRA) issuing an order or the prime minister asking his party members to stay mum.

The problem is greater than issuing an order and that problem is misogyny. This slanted view that women are to be blamed for relationships not working out, that relationships are up for public scrutiny and every person has somehow the moral right or duty to comment on what transpired between two individuals in their homes.

How is Reham and Imran’s divorce relevant to the effected victims of the earthquake? How is the family feud and Reham’s relationship with Imran’s friends important to the fact that Pakistan is facing a war? That Pakistanis have extra-judicial killings, poverty, sectarian hatred and crimes against women that are committed without abandon?

If there was one word for it all, it would perhaps be ‘masala’. We are a soap opera addicted nation and Reham Khan has been a spicy distraction from the banality of real life.

While we sit and watch, like an accident in slow-motion, ‘experts’ on television tear someone’s personal life apart, analyse what can only be a traumatic time for families – we forget that Pakistan is no suburbia but a cesspool of various humanitarian crises that need attention and genuine discourse.

Oh, she must have done something to make Imran Khan unhappy!

Oh, she must have brought this on!

Yes. This comforts us.

To our society, our media, our journalists, even our friends and families who have long subscribed to patriarchy and the lop-sided mansplaining it proffers – this makes perfect sense.