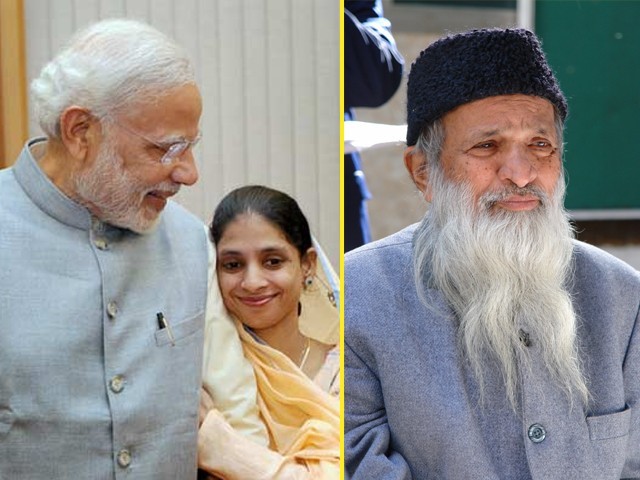 The Indian government decided to donate INR10 million to the Edhi Foundation as gratitude for taking care of Geeta.

“You Indians, your country is the rape capital of the world.”

“All the minorities should just move out of Pakistan.”

“You people don’t even have access to toilets, what are you talking about?”

“At least we are not killing people in the name of religion.”

The vitriol spewed against Pakistan by an Indian or vice versa is nothing new. Working for a local newspaper in Pakistan, anti-India statements from Pakistanis and vice versa is an everyday norm now. In fact, if you were to quickly browse through this very website and pick any news story or blog, even the ones that don’t remotely discuss ‘India’, ‘Pakistan’, or even ‘Bangladesh’, a debate on India-Pakistan somehow manages to ensue, erupting further into a full blown war of words. The content of that debate is nothing but diatribe taking us back all the way to 1947, with only a few sane voices openly dissociating with the debate on behalf of their countrymen.

In case you’re wondering, these comments are made by a class of people who have easy access to the internet – it would be safe to say they form an educated segment of their respective societies.

It’s a shame and what’s worse is that this is the segment we refer to as ‘civilised’.

This cavernous animosity has also managed to seep into our entertainment industries, sporting events, national tragedies and even the weather. And it only seems to gain more and more momentum with time. Heck, we’re worse than Caesar and Brutus. We take pride in watching the other fall.

Recently, the Indian government decided to donate INR10 million to the Edhi Foundation as gratitude for taking care of Geeta, a young deaf and mute Indian woman who strayed into Pakistan more than 10 years ago. The foundation politely declined the offer.

The Pakistani public, quick to judge and relish in the moment, saw it as a slap on India’s face, revenge for all the ‘wrong’ Pakistan has had to endure at the behest of India and its government. They lauded Abdul Sattar Edhi and his son, Faisal, for not ‘bowing down’ to Modi the way everyone else has.

My dear, naïve, Pakistanis, I hate to break it to you but this had nothing to do with India-Pakistan.

As per the policy of the foundation, funds donated by heads of state, governments – national or international – would not be accepted. Our media was quick to report that the Indian PM’s donation was declined by Edhi, as if to say a donation made in his personal capacity was refused on an ‘anti-India, anti-Modi’ basis as opposed to the policy that has been standing for years.

The greatest philanthropist of our nation, Abdul Sattar Edhi was commended for “saving Pakistan’s self-respect”.

But I would love to know, is our “self-respect” so flimsy that it flounders around with the direction of the wind? Would this still have been a matter of ‘self-respect’ had the donation been given by our Chinese brothers? Would we have reacted and praised the great philanthropist in the same manner? Would this news even have made it to publications?

And before you say, “of course, we would have”, I would suggest you do a simple Google search first before making up your mind.

In fact, when the government of Japan offered to donate 100 Toyota ambulances to the foundation, that offer too was humbly declined. But did we hear of that one in the news? Did that also make headlines? Did that too save our floundering sense of self-respect and honour?

Perpetuating feelings of hate, especially between these two countries, has never been difficult, but it is appalling to see how quickly we, the citizens, forget to use our brains and sanity is replaced with a sudden spurt of jingoism.

It does not take a genius to conclude that hate, on both sides of the border, is only reserved for one particular neighbour.

Simply put, declining the donation was not about making a statement or preserving our sense of self-respect; it was about following policies and this was not a case of us versus them – not this time at least.

I guess #Nilofar and Karachi just weren't meant to be...