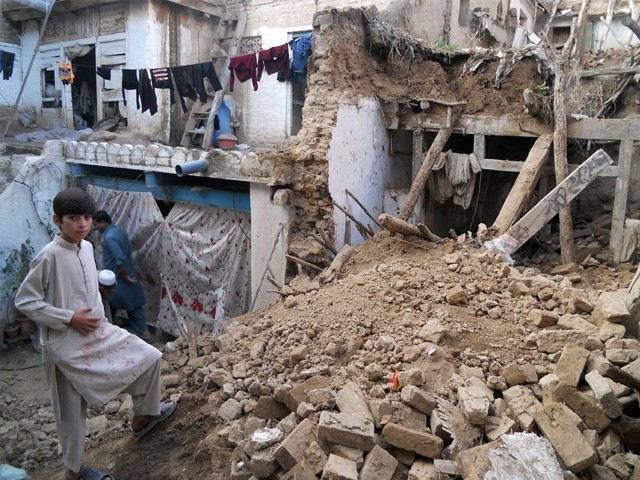 A Pakistani boy stands on the rubble of houses after an earthquake in Kohat on October 26, 2015. PHOTO: AFP

It was déjà vu for anyone who lived through October 8, 2005, and not just the feeling that the ground was going to split open.

Yet again, we have shown that at times when people come together, irrespective of cast, creed, faith and political affiliation, we Pakistanis would rather choose to be divisive. People are dying, yet clerics say they are ‘happy’ to see attendance rise in mosques.

People have been left homeless, yet politicians are busy point scoring, blaming each other for the slow response of the other instead of taking responsibility for their own mismanagement.

Hospitals are being called high risk buildings by their own staffers, yet social media crusaders are trying to make jokes at the expense of the cricketer and the nihari lover instead of rallying people together.

And of course, the sycophantic praise for people who are simply doing the jobs they were hired to do so.

Did you ever praise your milkman for not adulterating the milk?

The Express Tribune ran a special edition on the 10th anniversary of the October 8, 2005 recently, with some of the stories discussing how far we had come, and where we have failed. Around the same time, in a story on reconstruction of houses in Azad Jammu Kashmir, a local was quoted as saying he had not adhered to the earthquake-sensitive building requirements issued by the government, simply because they were too cumbersome.

That is the equivalent of walking through a minefield because it would be shorten and save time.

When the government tries to make people safer, they refuse to take the advice. Should the government punish such people by refusing aid the next time they need it?

But the governments – federal or provincial – are not without fault.

“A probe should be launched into these funds as no one knows where billions of rupees went,” and that the “government has yet to release funds to implement its 10-year National Disaster Action Plan.”

Sharif – the one that wears civvies (Nawaz Sharif) – has been criticised for the slow response and the failure to quickly announce a relief package. The former complaint, however, is more related to the rushed-through 18th Amendment. Provincial disaster management authorities, like many other devolved departments, still lack capacity, and the addition of new departments may have also created more red- tape in getting things done. The fact that such important departments were devolved before the provinces were ready to handle them is in itself something that deserves investigation.

Meanwhile, Imran Khan is in Khyber Pakhtunkhwa (K-P) getting photos taken at hospitals in the province. Note that the photos shared give him more prominence than Chief Minister Pervez Khattak, the head of the provincial government.

At the same time, according to a newspaper report, the New Balakot project remains stalled because the locals are not fond of Pakistan Tehreek-e-Insaaf (PTI). The same report said it was previously stalled by the Awami National Party (ANP) government because the area is not Pakhtun.

Incidentally, the Pakistan Muslim League-Nawaz (PML-N) had stalled an important water supply project in Murree because, as a colleague reported, the incumbent PML-N MNA did not want his Pakistan Muslim League Quaid-e-Azam (PML-Q) predecessor, who started the project, to be able to take any credit.

So basically, the attitude of the rulers is that anyone who doesn’t vote for them can drop dead. And who knows how many people have actually died, and will die in the future, because of this approach?

As for broadcast media, instead of immediately offering advice on how to be safe and directing people towards the failings of the governments in arranging effective immediate disaster response and addressing building code violations, reporters and anchors were telling viewers to look to the heavens for help. That job should be left to the clergymen, even if they are busy enjoying increased attendance due to the deaths of people they call sinners. Evil, four-year-old sinners.

Sadly, we keep drawing lines in the sand while forgetting that, in the greater scheme of things, we are but grains of sand.