Excuse me VIPs, can you move your cameras and armed personnel so doctors can save lives? 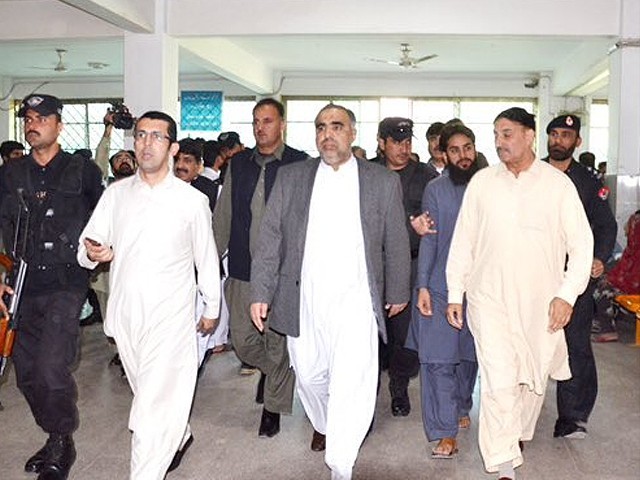 K-P Assembly Speaker, Asad Qaisar, arrived at the hospital with an official convoy which created many hurdles in the hospital’s functionality. PHOTO: TWITTER/@AsadQaiserPTI

Did you know that essentially there are only two types of people in Pakistan? Let me introduce them to you.

The first is the population in waiting.

They are the ones who stand in lines, who grab a ticket and wait for their turn, who crowd the waiting rooms until their names are called out. They are the poor, the middle class, the hapless subaltern.

The second, more fortuitous type, are the VIPs.

They are the ones who whizz past lines under a haze of officialdom, who don’t have to collect tickets and watch the clock tick, who have never seen the inside of waiting rooms. They are the rich, the powerful, the dastardly dominant, and most interestingly, the media, which has wrangled its way into this section of the population.

This marked division in our society became as apparent as ever after the earthquake, a few days ago. Recently, the victims of the 7.5 magnitude earthquake that hit Pakistan and Afghanistan on Monday faced serious problems when their treatment was delayed due  to rush of people and visits by VIPs and media persons at the accident and emergency department of Lady Reading Hospital (LRH) in Peshawar.

It has become a common practice for politicians, prominent figures and the media to rush to the hospitals when a calamity strikes, and get photographed with victims.

Bones don’t heal under the fluorescent flash and wounds don’t close up beneath the gaze of lens.

They need stitches and bandages, not cameras and questions.

LRH, the province’s biggest health facility received 162 injured people soon after the tremor but it became difficult for the staff to treat the patients because of the VIP visits that clogged the wards.

The hospital staff was cracking under tremendous stress. The officials stated,

“We are always in a state of emergency but what can you do when dozens of people accompany one patient.”

Naturally, the loved ones of the patients cannot help but rush to the hospitals out of concern. They do not come with cameras and armed convoys. The VIPs, however, show up with incredible pomp.

K-P Assembly Speaker, Asad Qaisar, reportedly arrived at the hospital with an official convoy which created many hurdles in the hospital’s functionality.

One of the doctors at the hospital ardently said,

“We don’t need them, they should not come since it always creates problems for us.”

Qaisar later tweeted a heart-warming message for the public.

Every nation gets tough times, We are a brave nation and we will fight this calamity together, Let's unite & fight our problems together

That’s all fine and dandy, Mr Qaiser, but can you please move your cameras and your armed personnel so that the doctors can save lives?

At the mere news of the arrival of a VIP, the entire administration swings into action to provide protocol to the visiting dignitaries. The entire focus is switched to a particular ward that a VIP is about to visit.

Then these VIPs are accompanied by their staff and political workers and quite often senior administration officials of hospitals also escort them, due to which proper attention is not given to patients in need, causing an unwanted delay in the treatment. Many patients face complications when their treatment that is promptly required gets delayed.

Like this wasn’t a big enough obstacle, visits of VIPs attract the attention of their supporters, who trail behind them everywhere.

While we’re talking about obstacles, let’s discuss the admirable efforts of the media, the journalists and the photographers who rushed to the hospital to tell the country of the anguish of the victims. How very altruistic of you guys. The public needs to thank them for making sure that there were more DSNG media vans outside the hospital than ambulances.

Thanks for making it difficult for the nurses, doctors and paramedics to move around efficiently and attend to the patients. Oh, and we can’t express how grateful we are as a nation that you guys push your way into the Intensive Care Units (ICU) and operation theatres without giving a damn about sterilisation and spreading infection. Truly, you guys are a blessing!

In the midst of the whole VIP frenzy, it is refreshing to hear about the non-waiting class being put in its place. Shaukat Khanum Memorial Cancer Hospital and Research Centre, Lahore didn’t allow any journalists to meet Imran Khan, who was being treated there after a fall during 2013 election campaign, because medical ethics don’t allow it.

Moreover, Rehman Malik and other politicians were kicked off planes by angry passengers for causing unprecedented and ridiculously long flight delays.

Qaim Ali Shah was recently chastised for landing his helicopter in Niaz Stadium in the middle of a cricket match and causing a two-hour delay.

Beware VIPs! The waiting class is keeping a close eye on its clocks and your time is up.

The author is IoBM graduate with majors in Journalism. Her interests include reading and writing.

Eid in the life of a transgender in Pakistan

If there is a sequel to Warcraft, I sincerely hope Duncan Jones doesn’t direct it