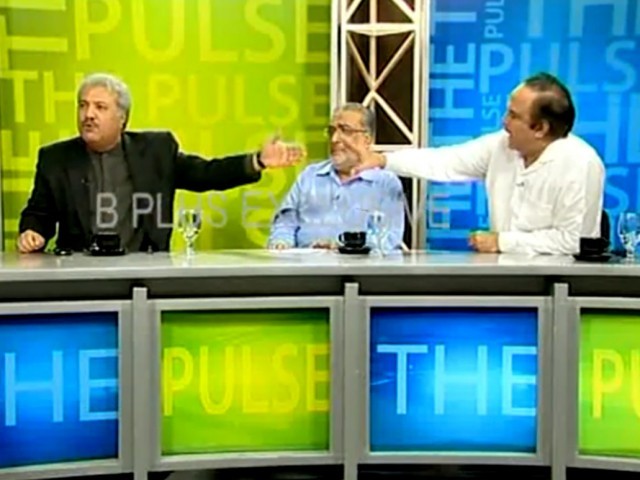 A viral YouTube video of a brawl between politicians has been doing the rounds online.

What happens when you put three political leaders on a standardized panel set with a confused looking anchor and throw in the word ‘pithoo‘? A bar room brawl that would put fraternity boys to shame.

Leaders on a local talk show recently became highly emotional when the issue of secret loyalties to the US came up. The entire situation descended in politicians childishly echoing “No, you are” at each other and ended with one leader picking up a glass of water and flinging it across the set at his colleague. Thankfully, he missed. The Tehreek-e-Insaaf and Pakistan Peoples Part leaders finally ended up, arm in arm, trying to slap each other. A flaccid looking anchor was completely unable to maintain any order on the show.

This is hardly the first time that anchors or hosts have become the audience in a show that takes on a ring side circus like quality. Even stalwarts like a certain doctor have been left dumbstruck by their emotional guests as they attack each other and tear each other to bits.

Wasn’t it the host of the show who was supposed to be in control of the situation?

From the glory days of Meet the Press to talk-shows slow down with Crossfire it was always the anchor who held the reigns.

Why, in Pakistan have the tables turned? How is it that those who should be answering the questions are pushing those who are asking them around?

The fact that anchors in Pakistan have no proper training is little excuse for the fact that the broadcast media is evolving in to a tool for political lobbyists. A reality show on news channel Samaa is an example of what media groups apparently look for in anchors. While the contestants are told to speak in clear, precise polite Urdu one of the judges is among the most rude hosts on television. This dichotomy of values – between what should be done and what sells – is what low level political leadership continues to play on.

They will continue to throw glasses, microphones and pencils at each other and the real questions will never be asked.

Karachi blast: What's security got to do with it?